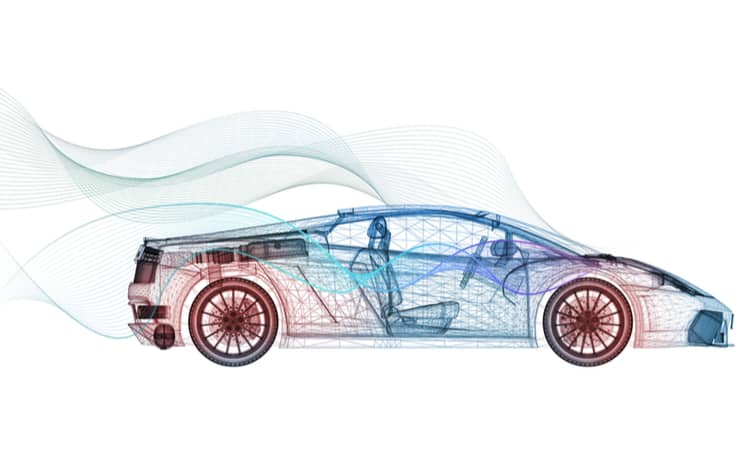 Have you ever listened to a pilot describing the way they feel when flying? Words like speed, exhilaration, and freedom may be among the expressions shared when talking about being at the helm of a plane. Curiously, you may get similar responses when querying people about driving sports cars.

The experience of those in control is not the only thing common to aircraft and automobiles. In fact, the same CFD techniques, such as the compressible Navier-Stokes equation, are used to aid in the design of both vehicle types. This is due to the fact that the same forces that act on airplanes also affect road vehicles. And, understanding automotive aerodynamics is critical for the design and manufacture of high-performance and safe automobiles.

The Effects of Aerodynamics on Automotive Operation

Evaluating the effect of airflow, especially as it relates to its interaction with objects, is a good general description of aerodynamics. Noting that air is a gaseous solution or fluid enables the fundamentals of fluid mechanics to be utilized for studying how air affects the operation of objects, such as automobiles, that come in contact with it. From an operational perspective, this interaction can be considered an impact on functionality or efficiency.

The basic function of an automobile is to transport or move people and/or things from one place to another. And, many of the 30,000 or so parts in an average car--which pales in comparison to the millions of parts in some airplanes--contribute to this function in some way. For aerodynamic analysis, the concern is with how flowing air impedes the ability of a vehicle to move in the desired direction.

The forces of interest that act on moving automobiles are the same as the aerodynamic forces studied for aircraft. For automotive aerodynamics analysis, these are shown in the figure below.

As illustrated above, drag, lift, downforce (which replaces gravity for aircraft study), and thrust are the forces that primarily impact an automobile’s operation. For optimized functionality, these forces must be controlled to achieve the following objectives:

Automakers are continually called upon to build vehicles that exceed the performance profile of those built previously. This demand comes from many sources, including end-users that want greater functionality, capability, and cost-effectiveness as well as governments that desire greater fuel efficiency, smaller carbon footprints, and more safety measures implemented. Striving to satisfy the demands for improved automotive efficiency in a highly competitive market is challenging and depends on controlling the forces that act upon vehicle operation. Of these forces, none is more important than drag, which comes primarily from vortices created by shear stresses in turbulent flow in the vehicle wake.

The Effects of Drag on Automotive Efficiency

As shown above, drag can have a significant impact on factors that define vehicle efficiency, which is a primary objective when designing automotive systems.

Why Is Aerodynamics Analysis Important for Automotive Design?

As clearly indicated above, aerodynamic effects play a huge role in the function and efficiency of automobile operation. Therefore, it is not an overstatement to say that aerodynamics analysis is a central requirement for designing and building vehicles that satisfy the many demands required of automotive systems today. This mandate is achieved by two methods: wind tunnels and CFD techniques. Wind tunnels are primarily used to discover important air flow attributes for new vehicles or to verify aerodynamic characteristics of older vehicle designs. CFD, on the other hand, is implemented during the design stage and reduces the time and costs associated with the development of new vehicles or those with modifications (such as shape, size, spoiler additions, etc.) that will change previous aerodynamic attributes.

One of the most cost-effective methods for studying automotive aerodynamics is the utilization of CFD methods. The ability to perform simulations prior to physical builds saves auto producers money on materials, parts, and development cycle time. In the figure below, a grid mesh of the surface of a vehicle is shown. Meshes, along with mathematical analyses capabilities, are the means by which CFD is utilized to provide the essential data used to design automotive systems to best navigate their air flow environment. 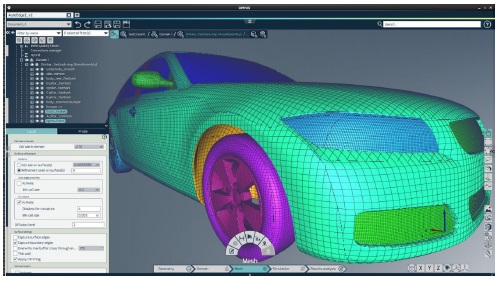 The mesh above was created with Cadence’s Omnis, an advanced CFD tool for performing automotive aerodynamics and other fluid flow analyses.