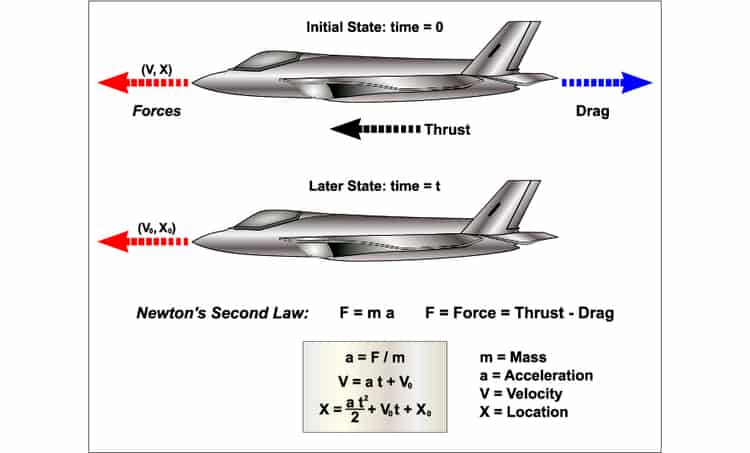 The dimensional analysis of an aircraft

The need to relate different characteristics of a system or between systems is fundamental to mathematics and scientific study. A good example of this is the analysis of a plane in flight. The plane's location and speed are important attributes, but they are expressed in different units that do not directly give any information about the other. However, with the help of Newton's second law, the speed can be written in a form that includes the location and vice versa. This is an example of why dimensional analysis is useful for not only simple motion, but even for complex subject areas such as fluid mechanics. In this article, we will discuss when and why dimensional analysis is useful as well as how it can be applied to fluid mechanics.

What Is Dimensional Analysis?

It is uncommon in mathematics and the physical sciences for there to be ambiguity surrounding the meaning of a well-used term. However, dimensional analysis is one of those rare instances. As an example, you may hear or see this term described as an area of study in itself or a methodology used to aid in the study of some other system(s). To clear up this mystery, here is a definition for dimensional analysis, at least as it applies to mathematics and the physical sciences.

Dimensional analysis refers to the fundamental method of relating quantifiable

system for which it is used.

As stated in the definition above, the relatability of units is essential for the utilization of dimensional analysis. The physical quantity discussed must be carefully arranged with the derived units to ensure nothing ends up dimensionless or current dimensionless parameters can be explained. Therefore, there are cases when and reasons why this mathematical tool is applied. Let's take a look at when and why dimensional analysis is useful.

When And Why Is Dimensional Analysis Useful?

In mathematics, there are many types of equations. However, in order for an equation to hold--or be true--the values on both sides of the equals sign must be logically equivalent. In other words, it must be possible for both expressions--through mathematical operation(s)--to arrive at the same value. The same must be true of the units or dimensions on either side of the equation to satisfy the principle of homogeneity of dimensions. If this is not the case, the equation does not hold as true.

Applications in Which Dimensional Analysis Is Useful

One or more of the list items above may be applied for studying any physical system. However, for complex system analysis where many attributes are of interest, such as fluid mechanics problems, dimensional analysis is especially useful.

How Is Dimensional Analysis Applied to Fluid Mechanics?

Dimensional analysis is useful in that it can be used for very simple equations or applied to very complex system analysis problems. Fluid mechanics is the field of study that deals with the mechanics of fluid--which includes gases and plasma--flow and the forces which act upon it. For complex system analysis, there are formal methods with defined paradigms that provide a systematic means of applying dimensional analysis to multiple attributes or characteristics of interest.

One of these is the three-step Rayleigh method. Although this method can be applied for fluid mechanics analyses, it is based on the assumption of exponential relatability between the variables used, which constrains its utilization for some problems. Another more broadly applicable method is the Buckingham 𝛑 Model.

The Buckingham 𝛑 Model consists of several more steps than the Rayleigh method. However, it is more robust as well. The steps are as follows:

To illustrate why dimensional analysis is useful for analyzing the mechanics of fluid systems, let's take a look at an example. With the following attributes of interest: flow velocity, fluid density, dynamic viscosity, gravity, surface tension, length, surface roughness, diameter, change in pressure, and compressibility, we have n =10, m (MLT) = 3, and 7 𝛑 terms. The following 𝛑 terms are obtained: 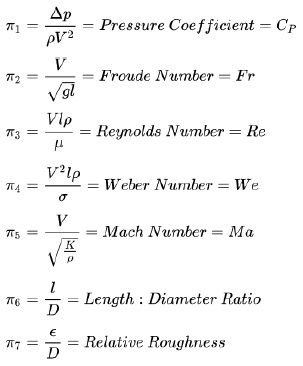 As this result illustrates, this method yields a number of important relationships, including the Reynolds number, which defines the transition from laminar to turbulent flow for external boundary layer analysis.