It is a commonly held view that it has only been a little over a hundred years since we escaped the bounds of terra firma and achieved flight. However, some historians believe our fascination with flight goes back much further than this. Some point to a tangible example of an earlier fascination with flight: the Saqqara Bird. The Saqqara bird was an artifact discovered in an Egyptian official’s tomb in 1898. Although it has the eyes of a bird, its construction is more similar to an airplane. It brings up the question...did the Egyptians know of the secrets of flight? The answer to that is elusive. However, to have actually achieved flight would mean they understood the fundamentals of aerodynamics.

The understanding of the basics of flight has enabled us to finally ascend into the skies and do so routinely and safely. We have succeeded in these advancements to a large degree by recognizing the similarity between airflow and fluid flow. In fact, the characteristics of both the former and latter are treated from a scientific perspective. And, the mathematical methods and tools we typically employ to analyze aerodynamics and fluid mechanics, including the fundamentals, are the same.

The Fundamentals of Aerodynamics

The first step in understanding aerodynamics is to understand the forces that act on aircraft in flight, which are illustrated in the figure below. 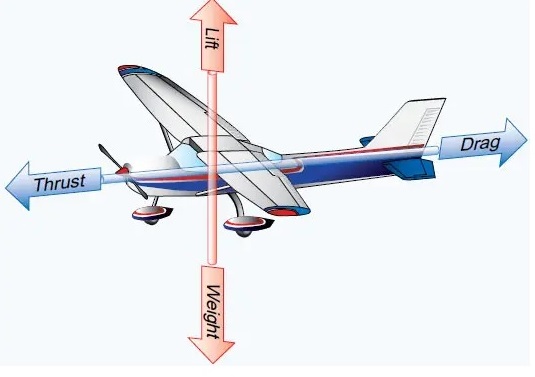 The basic forces of aerodynamics. Image from Flight Literacy.

As shown above, there are four basic forces that impact an aircraft.

Note that g is the average gravity at sea level (9.81 x 103 m/s2), m is the mass of the elevated body or aircraft, r is the distance from the center of the earth to the body (center of gravity of the aircraft).

Together, these forces define the various states or flight conditions in which an airplane--or aircraft--may exist during flight.  In order to analyze aircraft flight, a study of how the plane responds to airflow is required.

The Relationship Between Aerodynamics and Fluid Mechanics

According to Merriam-Webster, aerodynamics is defined as:

with the forces acting on bodies in motion relative to such fluids.”

This definition clearly makes the case that air in motion is a fluid. Therefore, evaluating the mechanics of flight as influenced by airflow falls safely within the boundaries of fluid mechanics, which is broadly defined as the study of the mechanics of fluids.

There are a number of essential fluid mechanics equations. However, the Navier-Stokes equations are probably the most important and they are applicable whether studying compressible or non-compressible flows. Below, the equation is given for a compressible Newtonian fluid.

The above equation can be viewed as a force equation for fluids, as it illustrates the relationship among the various forces acting on the fluid, as given in Eq. (3).

This equation, although often used to study the aerodynamics of an aircraft due to airflow, is complex and necessitates that you employ a CFD tool for calculations and analysis.

Utilizing fluid mechanics equations to study aerodynamics is an effective methodology. However, the quality of results is dependent on the CFD tool(s) you utilize. In the figure below, an example illustrating the magnitude of vorticity around the aircraft due to airflow is shown. 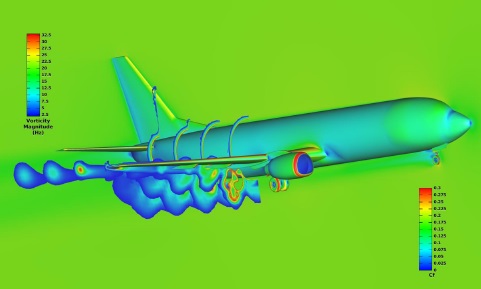 The graphic above, which is helpful to gain a visual perspective of whether vortex shedding is occurring, demonstrates the types of analysis capabilities you need to effectively evaluate the aerodynamics of your system. Omnis from Cadence is a comprehensive advanced CFD analysis platform that will enable you to study the fundamentals of aerodynamics and beyond for your system design.