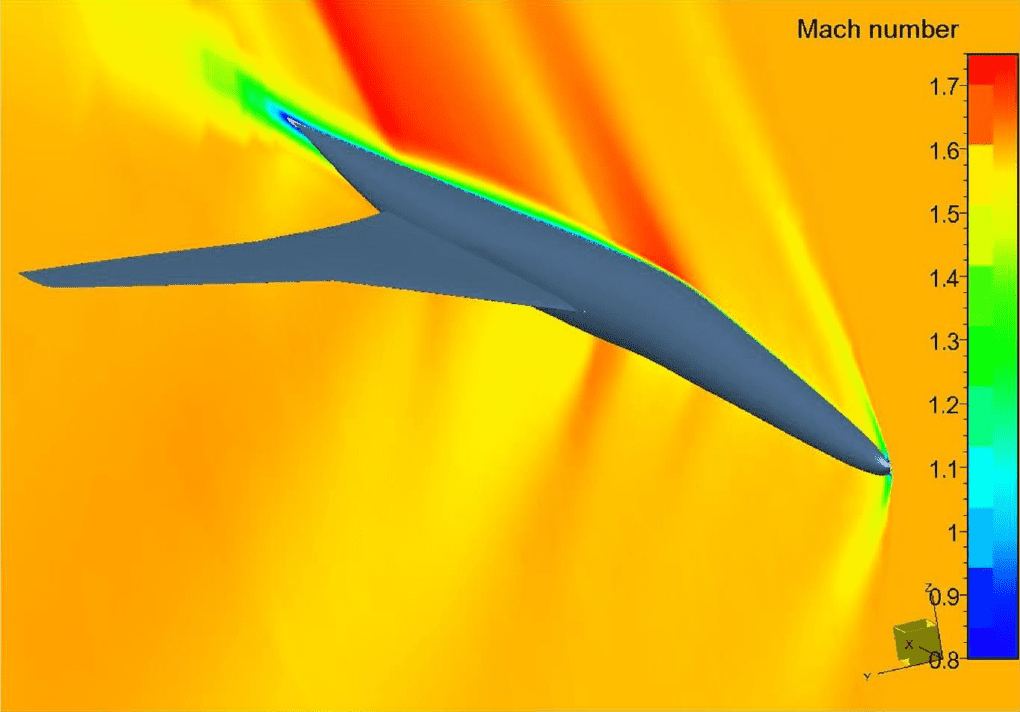 Aerodynamics is a complex topic involving multiple areas of physics and engineering, just as you might expect. Even though aerodynamics analysis is complicated, there is one area of aerodynamics that can be easily described using basic physics: aerodynamic forces. The primary forces acting on an aircraft can be broken down into a few basic components and analyzed in the same way as a typical free body diagram.

These forces are also related to fluid flow along the body of an aircraft. Fluid can flow in three possible regimes (laminar, turbulent, or transitional), and the characteristics of fluid flow in each regime will affect the drag and lift on an aircraft. In this article, we’ll look closely at the main components that make up aerodynamic forces and how CFD problems are related to these forces.

The two main aerodynamic forces that are driven by wind speed are shown in the free body diagram below. Gravity will always point downward and will act at the craft’s center of gravity. Thrust will generally be parallel or nearly parallel to the chord line, which will direct the motion of the craft in a desired trajectory.

Drag is one of the critical forces, as it will determine the amount of thrust required to keep the craft in dynamic equilibrium. As an aircraft is in motion, it will be moving through a fluid, which will be responsible for exerting lift and drag on the craft. Lift and drag will determine the net aerodynamic force acting on the aircraft. The drag force will be some function of velocity, depending on the flow regime. As we’ll see below, it is often desired that fluid flow across the body of an aircraft be laminar, as this will produce the smallest drag force during flight.

The drag force, also called skin friction, will depend on the magnitude of the wind speed projected along the attack angle and the flow regime. Several models have been used to determine the total drag force acting on an aircraft in general. The drag force is defined as follows:

In this equation, Cf is the drag force coefficient, which comprises contributions from a viscosity-driven friction drag force and a pressure-driven drag force. The other symbols have their usual meanings. Note that the density here is evaluated at the surface of the aircraft. If we remove the integral and convert back to a derivative, we can see that the integrand in the above equation defines the pressure exerted on the aircraft due to drag. There are several definitions for Cf, all of which depend on the flow regime.

Approximation for drag in laminar flow

Drag in turbulent flow is more complex, and it is difficult to generalize a definition for the drag coefficient to all values of Reynolds number. One result that is useful in low Reynolds number flows with turbulent boundary layers is Prandtl’s power law:

There is also a transitional region between laminar flow and turbulent flow, where the drag coefficient also depends in general on some function of the Reynolds number. This regime of fluid flow is also complex, and determining an appropriate drag coefficient relies on accurate CFD simulations.

Using Simulations to Determine the Aerodynamic Forces Acting on an Aircraft

The main point in looking at the above equations is this: the problem of determining drag on an aircraft is really one of determining the flow regime and the flow velocity. Because air is a compressible fluid, we also need to know its density at the surface of the aircraft as well. Taken together, it’s possible to evaluate drag conditions and thus the total aerodynamic force on the craft.

Determining the aerodynamic forces acting on an aircraft requires a set of CFD simulations for determining the fluid flow rate. Because the flow rate will determine drag and lift on the aircraft, it’s also important to use some FEA/FEM simulations to determine the internal mechanical forces to ensure structural integrity. Mesh generation is also important to ensure the appropriate balance between simulation accuracy and computational effort, and the right set of solver tools can help.

Systems engineers that need to understand the influence of aerodynamic forces on their designs should use the complete set of CFD simulation software from Cadence. The mesh generation tools in Pointwise can help you create accurate simulation grids with high mesh order in complex geometries without requiring extensive computational complexity. Once a mesh is created and ready for further analysis, the set of CFD simulation tools in Omnis 3D Solver can determine the flow solution in your system accurately and efficiently.