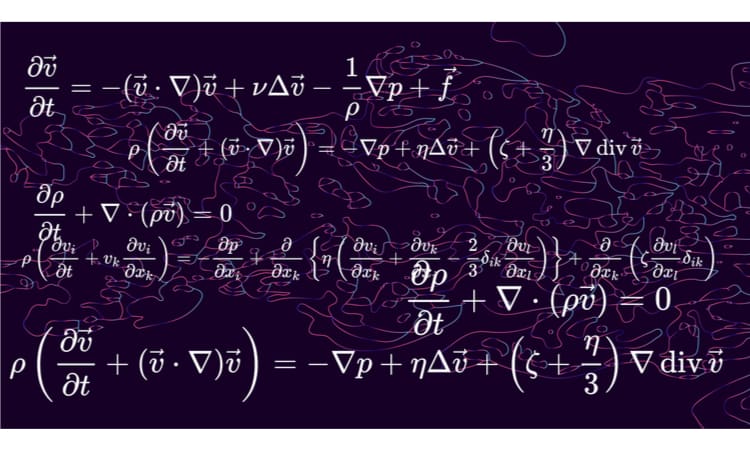 While Galileo passed down many mathematical and scientific gifts to us, the assertion that “Mathematics is the language with which God has written the universe” is one that stands out. Indeed, we are able to understand and even manipulate our environment through the utilization of mathematics, and equations are the keys that open these doors.

In the field of fluid dynamics, there is probably no more important equation than the Navier-Stokes Equation. In this article, we will explore this equation, with a particular focus on the compressible Navier-Stokes equation.

Why Is the Navier-Stokes Equation Important?

The Navier-Stokes equation--shown above--or some form of it is typically at the heart of any analysis of fluid flow, which includes gases and plasma in motion. This equation is employed to analyze both laminar and turbulent flow regimes and can be utilized for 1-D, 2-D, or 3-D evaluations.

Fluid flows may be classified in a number of ways. For example, boundary layer evaluations of airflow across the surface of an aircraft are external flows, while analyzing the fluid changes within an oil pipeline are internal flow studies. Irrespective of these classifications, the Navier-Stokes equation can be employed to determine the pressure and velocity of the fluid. However, an important distinction that affects which Navier-Stokes equations should be used is whether the fluid is compressible or not.

All fluid flow is subject to change due to temperature variation. Although, in some cases, the change may be treated as negligible. With respect to density change, in particular, some fluids do not undergo significant change as a result of pressure variance. When this is the case, the fluid is said to be incompressible and the applicable Navier-Stokes equation becomes the following:

We can arrive at the equation above by instituting the assumptions that the fluid is isotropic--or its properties are uniform in all directions--and stress is Galilean invariant or does not depend on velocity directly.

Some fluids, however, may experience a significant change in density in response to pressure variation. These fluids are compressible. Again, it can be assumed that stress is Galilean invariant and the fluid is isotropic. If it is also assumed that the second viscosity, 𝞯, is negligible or zero, the compressible form of the Navier-Stokes equation is as given below.

In the above equation, the last term on the right, 𝝆g, has been replaced with F for generality. Deconstructing this equation into the different types of forces, we have:

As shown, the compressible Navier-Stokes equation is a partial differential equation. Typically, a continuity equation, shown below, is simultaneously evaluated, yielding solutions for the momentum and velocity of the fluid flow.

The degree of difficulty in solving the compressible Navier-Stokes equation varies depending upon fluid properties and the dimensionality of the problem space. However, it is advisable to deploy a solver, such as the one shown in the figure below. 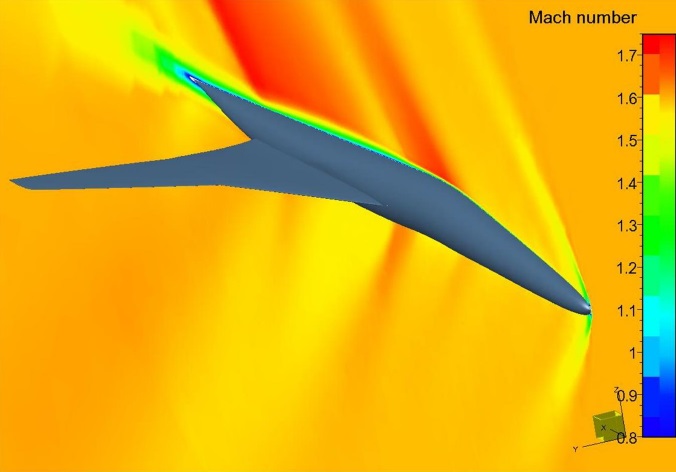 Whether you are determining the mach number (as shown above), analyzing boundary conditions of a surface, or conducting any other fluid flow analysis that involves the compressible Navier-Stokes equation, the Cadence Omnis solver provides advanced capabilities that will aid your system design.