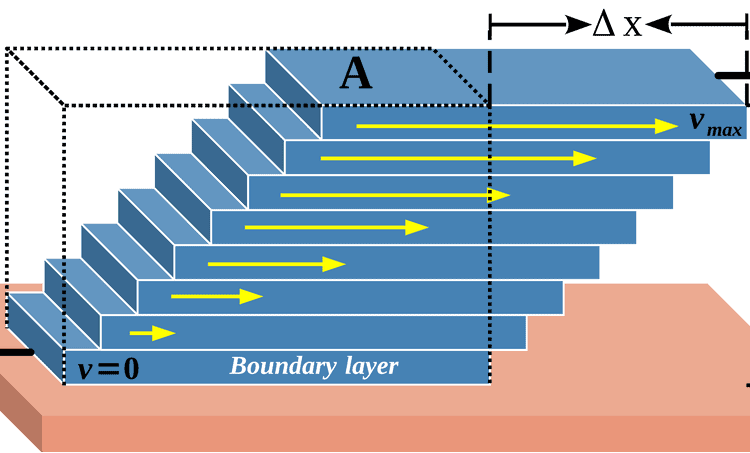 Sir Isaac Newton is quite famous for developing the three laws of motion. Collectively, these are important, as they are foundations for our understanding of classical physics. It may come as a surprise, however, that Newton was also instrumental in our understanding of fluid flow. Specifically, Newton helped us understand viscosity, which describes the thickness of a fluid and affects its resistance to flow due to internal forces. In fact, there is a Newtonian law that defines the shear stress in fluids.

Depending upon the medium, shear stress may cause a change in fluid flow between layers. An understanding of this phenomenon is important for designing, monitoring, and controlling systems, which typically include electronics and PCBAs, for a wide range of applications and fields, including aerospace, automotive, energy, and industrial processing.

What Is Shear Stress?

As the name implies, shear stress refers to the action of a force applied to a material, as indicated by equation 1.

The above equation gives the average shear stress per unit area. From Newton, for fluids we have:

where  µ is the viscosity and dµ/dy is the shear rate. 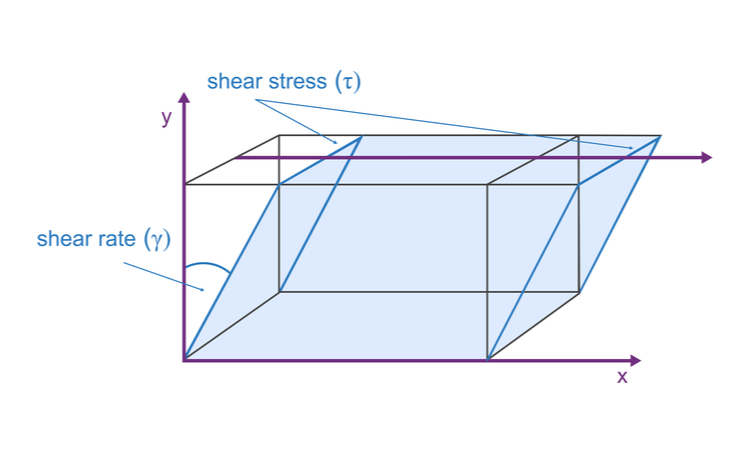 In the figure above, the relationship between shear stress and the shear rate is illustrated. From equations 1 and 2, a definition for the shear stress in fluids follows:

Similar to Newton’s laws for classical motion, when a force is applied to a fluid, the result is motion. For fluids, this is called  fluid flow, which does not occur without resistance.

The Relationship Between Stress and Strain

From equation 2, we see that if the shear rate is constant, then the shear stress is zero, even under changing viscosity. It is also true that there are fluids where the viscosity remains constant irrespective of the shear force for constant temperature. These fluids, which include gasoline, alcohol, mineral oil, and water, are known as Netwonian fluids. There are, of course, non-Newtonian fluids where the viscosity changes with the application of shear force. These are classified as follows:

As viscosity defines a fluid’s physical state, and thus its susceptibility or resistance to flow, this is an important characteristic to understand and it influences the choice of lubrication, especially for mechanical systems.

In order for a fluid to resist shear stress, it must be in motion. In this case, viscosity is defined by the relationship between stress and strain, as shown in equation 3.

where     𝛾 is the shear strain and d𝛾/dt is the strain rate.

In the above equation, µ is referred to as the dynamic viscosity and is defined for different fluids as a factor of the kinetic viscosity.

where     ν is the kinematic viscosity and ρ  is the density.

If we assume fluid flow in one parallel direction, we can define the shear strain with the following equation for all layers--although each layer may be flowing at a different velocity--over a small time interval.

Now, for a small change in vertical position, we can express the strain rate as:

which is our equation for the shear stress from equation 2.

When designing systems that include fluids, it is important to understand the effects of shear stress in fluids, which depends greatly on the specific fluids’ resistance to flow in the face of these forces. Whether trying to find maximum shear stress, principal stress, plane stress, or apply shear flow and flow rate calculations to things like hemodynamic shear stress, you should be able to trust the tools you use. Doing so requires that you have tools, such as Cadence Omnis™ platform, that give you the ability to model fluid behavior in varying systems and applications including piping systems, automotive elements, and other challenging environments.

Subscribe to our newsletter for the latest CFD updates or browse Cadence’s suite of CFD software  to learn more about how Cadence has the solution for you.