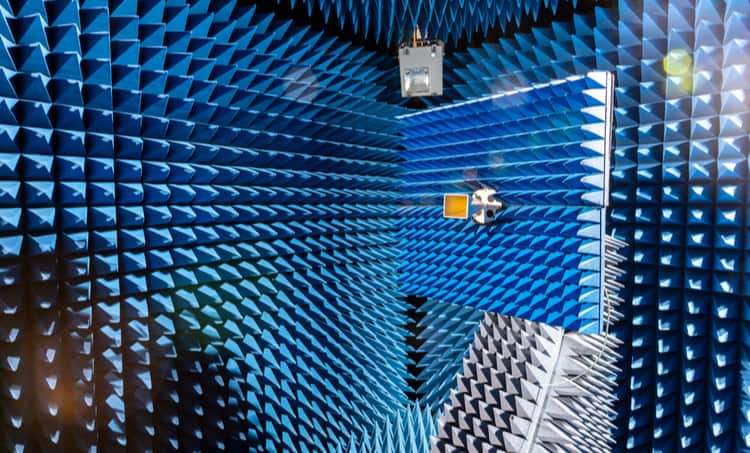 An antenna is an electromagnetic signal sensing element in many applications such as radio, local area networks, and telecommunication systems. Antennas transmit and receive electromagnetic signals between multiple wireless points and convert radio frequency signals traveling on a conductor into electromagnetic signals propagating through free space. Depending on the application, the size, shape, and type of antenna changes. It is imperative to test antennas to understand their nature and other specifications. Anechoic chamber antenna testing is one such testing procedure employed in the electronics industry to test and measure antenna parameters such as radiation pattern, gain, and efficiency. We will discuss anechoic chamber antenna testing in this article.

What Do Antennas Do?

The Importance of Understanding Antenna Characteristics

It is highly risky to employ an antenna without understanding its nature, specification, and characteristics. To choose an antenna for a given application, engineers typically inspect the radiation pattern, gain, and efficiency of the antenna by conducting antenna testing.

What Is the Purpose of Antenna Testing?

Antenna testing determines how the antenna performs and helps engineers understand whether the antenna possesses the desired characteristics. The location of antenna testing is also crucial, as the reflections from objects can lead to inaccurate antenna measurements. The outer space is the ideal location, but the next best testing location is an anechoic chamber.

The RF power transmitter injects RF energy into the antenna under test and outputs a stable known power level. The energy at frequencies other than the desired frequency should be minimum in the antenna testing transmitter system.

The positioning system controls the orientation of the antenna under test. The positioning system rotates the antenna under test and helps measure the radiation pattern of the test antenna. To determine the radiation pattern as a function of the angle, the test antenna is rotated with respect to the source antenna.