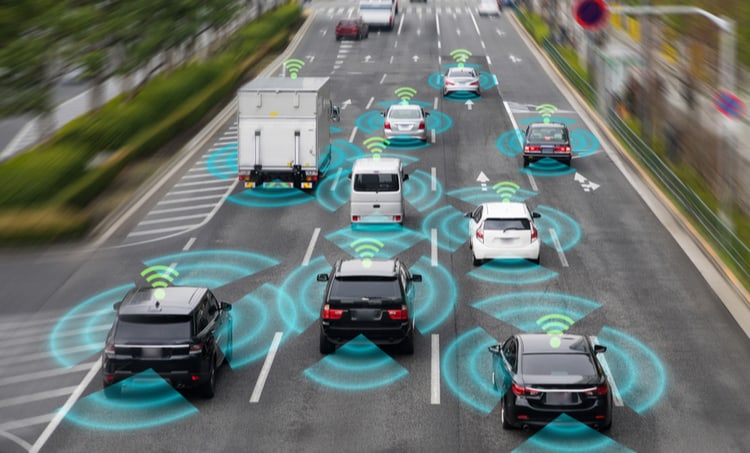 With the help of sensors, autonomous vehicles ensure no human interaction is needed while driving. A wide range of sensors are used in autonomous vehicles to build reliable vision. The sensors help the self-driving vehicle to detect hurdles or blockages in the driving environment and to move without causing fatalities.

Different sensors function together to form an accurate detection system in autonomous vehicles.  In most autonomous vehicles, the combination of cameras, LiDAR (light detection and ranging), and RADAR (radio detection and ranging) form the primary set of sensors that provide the functionalities of imaging, detection, ranging, tracking, and sensing of the drive location for a seamless ride. These sensor functionalities overlap, which helps in detecting the three-dimensional shape, distance, and speed of nearby objects.

Cameras are the best sensor solution to give an accurate visual representation of an autonomous vehicle’s surroundings. In autonomous vehicles, cameras are fixed on all four sides—front, rear, right, and left—to give a 360° view. These cameras use wide and narrow fields of view to perceive both short-range wide view and long-range arrow view. Super-wide lenses are used in autonomous vehicles for capturing a panoramic view that assists with parking.

Even though LiDAR can catch the position, shape, size, and depth of an obstacle, they can get glitched by fake echoes showing far objects as near objects and vice versa. LiDAR fails to distinguish between multiple copies of laser signals and shows non-existent obstacles to autonomous vehicles. LiDAR does not function well in rain, snow, or fog. Therefore, RADAR technology is the best and most precise sensor for autonomous vehicles.

The principle of operation for LiDAR and RADAR are the same, but instead of the light waves used in LIDAR, RADAR relies on radio waves. The time taken by the radio waves to return from the obstacles to the device is used for calculating the distance, angle, and velocity of the obstacle in the surroundings of the autonomous vehicle.

RADAR in autonomous vehicles operates at the frequencies of 24, 74, 77, and 79 GHz, corresponding to short-range radars (SRR), medium-range radars (MRR), and long-range radars (LRR), respectively. They each have slightly different functions:

There are two types of RADAR used in autonomous vehicles.

FMCW RADAR is dominant in autonomous vehicles due to its high resolution in range and depth perception. Extensive research studies by automobile manufacturers will continue to develop advanced variants of impulse and FMCW RADAR. Cadence software offers simulation tools to develop end-to-end radar systems not only for autonomous vehicles but also for aerospace, defense, and commercial applications.