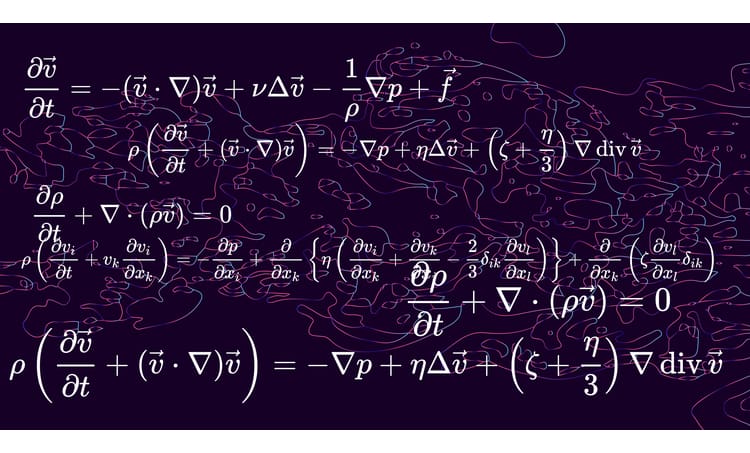 The equations shown in the above image come in many different forms, and it can be difficult to keep them all straight. These equations can describe any number of flow situations, such as viscous, inviscid, compressible vs. incompressible, solenoidal, turbulent, and many other flows. In this article, we will focus specifically on compressible and incompressible flow in fluid dynamics as well as the basic equations that describe these types of flow. As we’ll see, these sets of equations generally require a CFD simulation package to determine a flow solution.

This important distinction is what simplifies the incompressible fluid dynamics equations compared to the full Navier-Stokes equations. In either case, the goal in CFD problems is to calculate the flow velocity field as well as the density in compressible flow problems. The important equation relating density and flow velocity is the continuity equation:

Here, u is the fluid flow vector and ⍴ is the fluid density. The flow rate is generally expressed in Cartesian coordinates, although many systems can be simplified by transforming the Navier-Stokes equations into an alternative coordinate system (cylindrical, linearly scaled, etc.). This equation effectively expresses the conservation of mass flow rate flowing into and out of any region of the system.

In this equation, μ and λ are proportionality constants that define the viscosity and the fluid’s stress-strain relationship. The value of λ is generally a function of viscosity. In textbooks or other fluid mechanics guides, these values are related linearly to account for cases where fluids only undergo elastic deformation, which is typically the case for compressible fluids experiencing low body forces. This may not be the case for low-pressure gases, which could be easily compressed during flow.

Incompressible flow relies on two approximations to the continuity and momentum portions of the Navier-Stokes equations. Incompressible fluids have constant density in space and time, so all derivatives of the density are zero. The resulting continuity equation reduces to:

An inviscid approximation with μ = 0 can now be applied to the above equation as usual, giving the textbook form of the Euler equation of motion for incompressible inviscid flows.

There is one additional relation that relates streamline velocity, pressure, and density in a flow, known as Bernoulli’s equation. The following equation is valid for streamlines in incompressible flow:

This equation is effectively a statement of conservation of energy in incompressible flows. This equation is also system-specific, meaning different systems will have different values for the constant on the right-hand side.

The above equations don’t tell the whole story; there is also an enthalpy equation from thermodynamics that includes a dissipation term and accounts for temperature changes during flow. Thermal considerations are the basis for fluid behavior such as convective heat transfer, where a fluid is to facilitate heat transport. Stress-strain relations are also important for describing compressible fluids and would need to be incorporated into the above equations, further complicating descriptions of compressible flow.