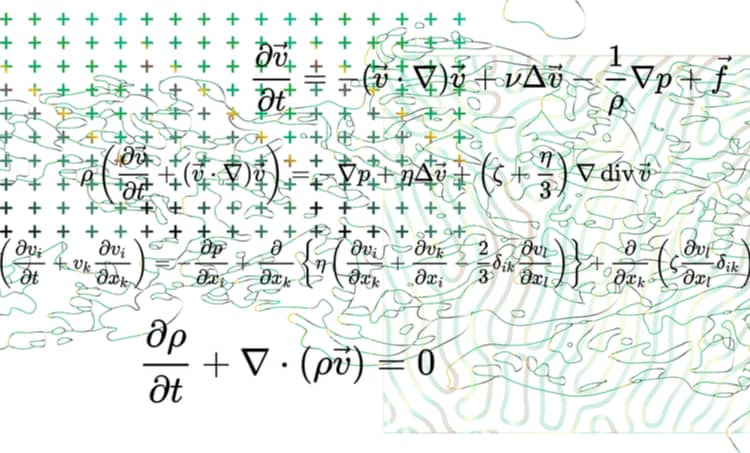 Just like in any other area of physics or engineering, fluid dynamics relies on several fundamental equations to describe fluid behavior, including turbulence, mass transport, and variable density in compressible fluids. In this article, we briefly explain fundamental fluid dynamics equations and their physical interpretations. The equations used to describe fluid flow have rather simple meanings, even if their mathematical forms appear complex.

In this definition, u is the fluid flow vector, which is generally expressed in Cartesian coordinates. In addition, due to conservation of mass, we have a continuity equation that expresses the change in fluid density ⍴ as a function of flow variation in space:

With this equation, we can immediately define the difference between compressible and incompressible flows. Assuming the density is constant in space and time (totally incompressible fluid), then the continuity equation reduces to:

Finally, there is a particular vector operator that appears in fluid dynamics equations, known as the outer product:

Definition of the outer product

With these basic definitions, we can now examine the main equations of motion that govern inviscid and viscous flows. These are the Navier-Stokes equations and Euler’s equations.

Momentum portion of the Navier-Stokes equations for compressible flows

In this expression, μ and λ are proportionality constants used to describe linear stress-strain behavior for the fluid. Note that, in general, fluids do not undergo elastic deformation for every value of stress they experience; such a case is related to the treatment of non-Newtonian fluids.

We also have a thermodynamic equation describing the flow:

Enthalpy portion of the Navier-Stokes equations

In this equation, h is enthalpy, k is the fluid’s thermal conductivity, and the final term describes dissipation due to viscous effects and the stress-strain behavior of the fluid under compressive forces:

Dissipation portion of the Navier-Stokes equations

For an incompressible fluid, we apply the constant density continuity condition shown above. Note that there is ongoing controversy as to whether the stress-strain proportionality constant λ should also be set to 0 for nearly incompressible fluids, but it is often ignored in standard treatments. These equations generally treat any case where viscosity and the internal forces it produces must be considered in fluid flow. If these forces are negligible, then we can reduce these equations to Euler’s equations.

The standard treatment of inviscid flow begins with Euler’s equations, where incompressibility is generally assumed. In the inviscid case, we have by definition μ = λ = 0; Euler’s equations are immediately derived by dropping any viscous terms from the Navier-Stokes equations. In other words, we assume one of the following conditions:

In any of these cases, this reduces the Navier-Stokes equations to the following form for compressible fluids with no viscosity:

For an incompressible fluid, we also apply the constant density continuity condition. For inviscid flows, it is also customary to set λ = 0, although, again, this remains a matter of controversy.

Finally, we have a different form for the enthalpy equation that includes a dissipation term proportional to λ:

Again, setting λ = 0 gets us back to the typical form of Euler’s equations found in textbooks on inviscid flow.

One useful relation for understanding incompressible steady flows is Bernoulli’s equation. This equation relates the energy (kinetic and potential) per unit mass of a fluid to its static pressure. For flows along a given streamline, the following equation is valid:

Obviously, the fluid dynamics equations listed above are very complex and cannot be solved by hand for every possible case. These equations are most easily treated in arbitrary systems using a commercial CFD simulation package. The complete set of fluid dynamics analysis and simulation tools in Omnis 3D Solver from Cadence are ideal for defining and running CFD simulations with modern numerical approaches, including compressible flows with turbulence. In Cadence’s simulation suite, physical design data is used for grid generation in CFD simulations—you won’t need to manually construct grids or create generation algorithms.