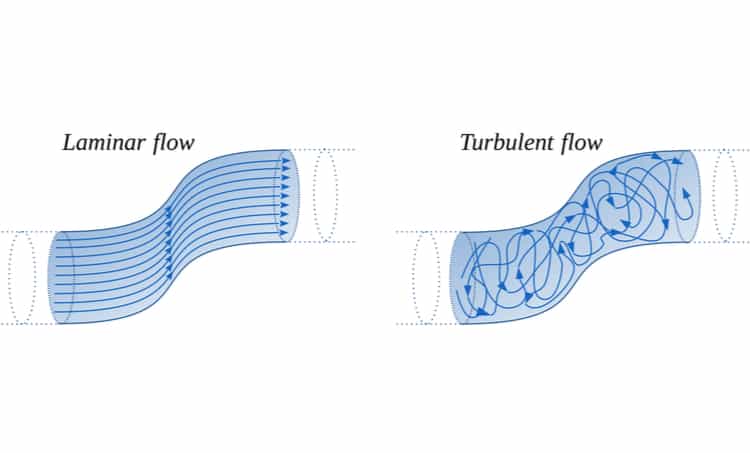 In systems influenced by fluid flow, it is important to analyze the fluid dynamics in order to quantify their effect. The flow behavior of such systems can be analyzed using computational fluid dynamics (CFD) simulations. With these simulations, a clear understanding of the flow regime as well as its paths and velocities can be obtained.

What Is Reynolds Number?

Reynolds number is the ratio of inertial forces to viscous forces, and this number categorizes fluid systems. It can also be interpreted as the ratio of dynamic pressure to shearing stress. It reveals the effect of fluid viscosity in controlling the flow pattern or velocity of the fluid. Mathematically, the Reynolds number can be given by the following equation:

Reynolds Number and the Viscosity of a Fluid

Fluid viscosity can be measured as:

There is a strong relationship between Reynolds number and kinematic viscosity, which we will examine next.

The higher the kinematic viscosity, the more efficient the fluid becomes at transporting momentum. The increase in momentum transport or momentum diffusion in fluids accounts for more laminar flow regimes. Highly viscous fluids and low-density liquids are good examples of high momentum diffusion with low Reynolds number values. Turbulent flow occurs at a relatively high value of Reynolds number, which means the kinematic viscosity of the turbulent fluid flow is less, and such fluids transport low momentum.

To resolve fluid flow problems, the Navier-Stokes equation can be utilized. However, the partial differential Navier-Stokes equations are usually scaled to form non-dimensionalized equations based on the Reynolds number. From the known values of fluid velocity, density, and viscosity, the Reynolds number of the fluid of interest can be calculated.

Understanding the relationship between Reynolds number and kinematic viscosity is critical, especially when solving complex fluid flow problems. You can characterize the flow regime in fluid problems using Cadence’s suite of CFD software. With these tools, it is easier to run CFD simulations in complex fluid-dependent systems that facilitate fluid flow modeling.