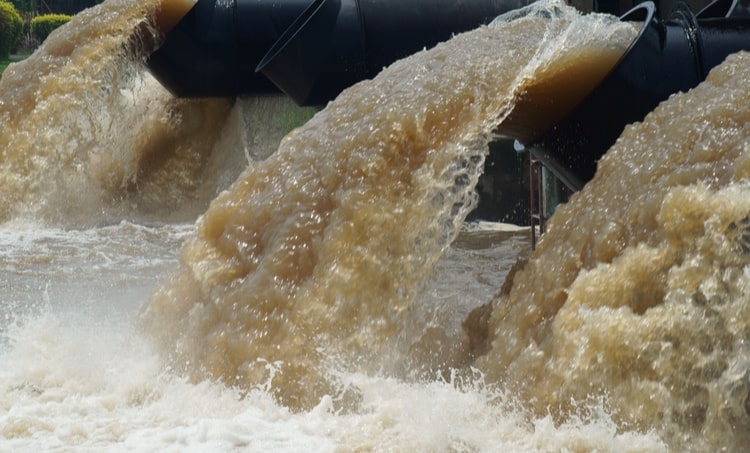 Fluid flow occurs in three possible regimes: turbulent, laminar, and a transition region. The flow characteristics in each fluid flow regime are easy to understand, but these can be difficult to simulate and will require specialized numerical techniques in general. In this article, we’ll examine these three fluid flow regimes and describe how the transition to turbulence can be quantified using some simple analysis techniques.

When a fluid is flowing in the laminar regime, its flow behavior is very easy to visualize and understand. Flow is driven entirely by external forces, which are usually just gravity and the driving pressure. Laminar flow is sometimes characterized as only occurring in incompressible inviscid fluids—this is incorrect. The Euler equations can be used to predict flow behavior in the case of inviscid incompressible flows, while the general Navier-Stokes equations would be used for other flow situations where turbulence may arise or the fluid is compressible.

In laminar flow, the fluid undergoes smooth linear flow that generally follows the boundary in the system. For example, for the flow in a pipe, the flow pattern is relatively linear and does not experience strong fluctuations. Eventually, when the Reynolds number for the flow gets large, the fluid flow behavior transitions from laminar to turbulent. 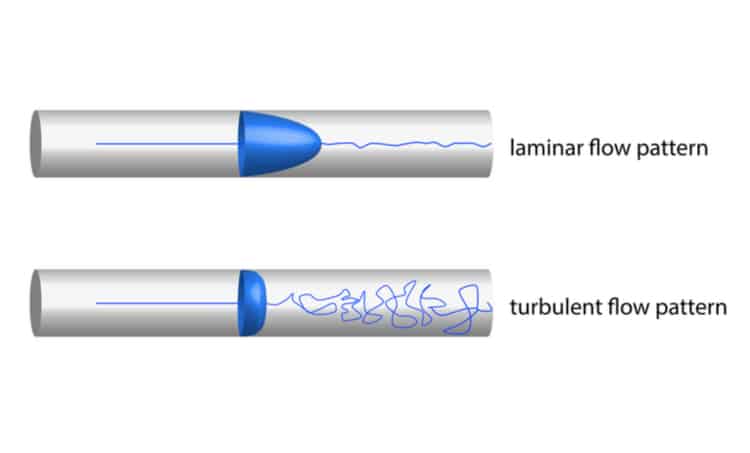 The turbulent flow regime is at the other end of the flow spectrum corresponding to very fast flow rates. Turbulence is one of the most mathematically complex areas of fluid dynamics, generally requiring numerical techniques and specialized models to examine flow behavior. When turbulence arises, fluid flow becomes convective (vortical) during flow, which arises in the boundary layer and begins growing in expanse along the flow direction. Turbulent flow behavior is not necessarily random, although statistical approaches can be used to quantify the amount of turbulence.

Instead of being random, the specific trajectory of turbulent flow is deterministic and can be predicted, but it is highly sensitive to initial conditions and boundary conditions. In addition, flow that is ostensibly laminar could quickly turn turbulent given small changes in the system parameter (orientation, density, flow rate, etc.). An excellent example occurs in aerodynamics, where airflow over an airfoil can become turbulent as the angle of attack changes, even though other flow parameters remain unchanged.

There is a region of Reynold number values called a transition region, wherein the flow behavior begins to change from laminar to turbulent. This should underscore that there is no sharp dividing line between the laminar regime to turbulence; the typical behavior observed in turbulent flow eventually becomes dominant at high Reynolds numbers. The exact range of Reynolds numbers is system-specific and fluid-specific, and even very similar systems could have very different Reynolds number values beyond which turbulence becomes dominant.

The underlying physics that causes a fluid to begin behaving turbulent versus laminar as a function of Reynolds number is still a matter of investigation. As a result, there have been many models developed that attempt to model and understand the mechanism governing the transition from laminar to turbulent flow. A good overview of contemporary transitional flow models can be found in the following reference:

For systems designers, the Reynolds number needs to be correlated with the level of turbulence in order to describe flow as being laminar, transitional, or turbulent. This can be done by calculating turbulent kinetic energy or a similar metric for various values of Reynolds number, followed by creating a plot that shows how turbulence develops as a function of Reynolds number. An example plot is shown below. 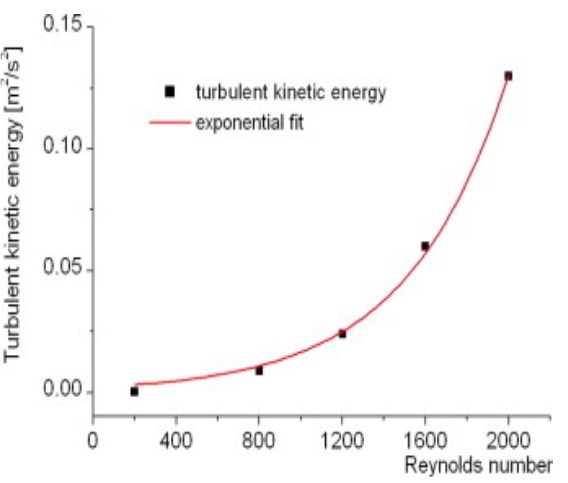 This type of plot is very important for determining the operating limits of a system where fluid flow behavior is an important consideration. From this type of plot, it is possible to specify some operating limits for the system. One typical example comes from aerodynamics; such a plot would allow a designer to potentially determine when turbulent flow along an airfoil produces excessive vibration. These more complex aspects of fluid flow in complicated systems can be determined with CFD simulation software and some additional analysis.

If you need to quantify system behavior in any of the three standard fluid flow regimes, you can investigate and simulate flow behavior with the meshing tools in Pointwise and the complete set of fluid dynamics analysis and simulation tools in Omnis 3D Solver from Cadence. These two applications give systems designers everything they need to build and run CFD simulations with modern numerical approaches.