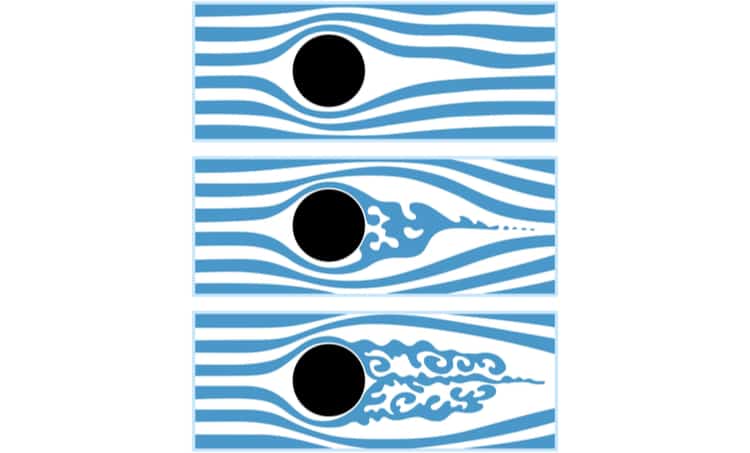 What path does fluid flow take? What effect does flow have on the boundary layer? How does Reynolds number affect flow? These are all important questions pertaining to the design of an aerodynamic or hydraulic system. CFD simulation models aim to provide a design solution to these questions, while the Reynolds number can simplify the process by predicting flow behavior.

So, how does Reynolds number affect flow? The range of Reynolds numbers is indicative of various flow regimes that can be observed along different regions of the flow. Based on this, designers can make the decision to optimize their system and improve performance efficiency. In this article, we will discuss how the Reynolds number affects flow and how this understanding is important for efficient fluid system design.

Reynolds number simply establishes the relationship between viscous and inertial forces during fluid flow. Mathamatically, this relationship can be expressed as:

ρ is the density of the fluid

V is the fluid velocity

D is the hydraulic diameter (of pipe, tube, or duct)

μ is the fluid viscosity

Based on this formula, most flows are distinguished as either laminar or turbulent. Influencing factors like the velocity, density, and viscosity of a fluid impact the effect Reynolds number has on flow. A low Reynolds number indicates the significant dominance of viscous forces over inertial forces, which keeps the flow in the laminar path. As the Reynolds number increases, so does the effect of inertial forces. Due to this change of balance, the velocity increases within the system and turbulence is created. In a closed system, a standard Re value reflects the flow pattern:

These effects can be seen when identifying a flow modeling strategy, which we will discuss next.

When simulating a flow model, the Reynolds number can affect the Navier-Stokes equation in the examination of the thermal and dynamic properties of a fluid. If we consider the value of Re to be large enough (Re→∞), the effect of the viscous force in the flow can be considered negligible. This greatly simplifies the solution and provides a greater understanding of the aerodynamic or hydrodynamic behavior of the fluid system.

Corresponding to this zero viscous shear stress, we can write the simplified Navier-Stokes equation (Euler equation) as: 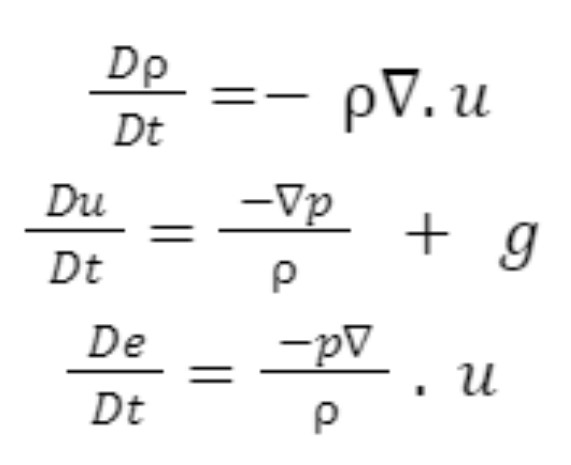 Where ρ is the density, u is the velocity, p is the pressure, g is the gravitational force, and e is the internal energy. The inviscid model thus formed is especially ideal when analyzing external flows.

For a small enough Reynolds number, (Re<<1), there is a small enough inertial force, but not of significant effect, thus, it can be neglected. The Navier-Stokes equation can then be simplified as:

Where ∇p is the gradient pressure, μ is the dynamic viscosity, and f is the applied force. This is also called the Stokes flow or creeping flow equation. Since this creeping flow is more concerned with viscosity, the equation can be used in the analysis of drag resistance when designing microfluidic devices or assessing the flow of lubricants or polymers.

Examining the Effects of Reynolds Number in a CFD Model

The question of how the Reynolds number affects flow is an important one to analyze during flow behavior simulation, given its varying effects on a fluid system. High and low Reynolds numbers infer how viscous and inertial forces take effect, influencing forces like lift and drag in a system. A similar analysis can be made for aspects of shear stress and heat transfer for varying Reynolds numbers. Reynolds-averaged Navier-Stokes (RANS)-based models can help system designers predict the effect of Reynolds number in laminar and turbulent flow simulations.

For a steady laminar flow or high-order turbulent flow, computational fluid dynamics (CFD) tools like Fidelity and Fidelity Pointwise can ensure high-quality mesh generation and precise simulation to capture every aspect of flow pattern, including that of transition and creep. The numerical computation and high-fidelity simulation capabilities of these CFD tools are what help in achieving the ideal design of a complex system for a range of Reynolds numbers.