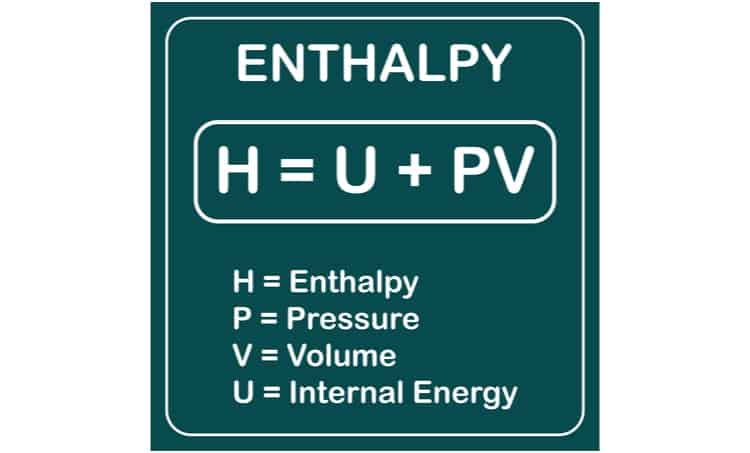 In any thermodynamic system, the energy content has a primary role, and this is expressed in terms of total enthalpy. Total enthalpy encompasses the internal energy and the heat content within a system. In day-to-day terms, we can observe this energy and heat in action during the combustion of fuels, the boiling or freezing of water, or any other chemical reaction. Understanding the physics behind enthalpy and its implications is an important part of thermodynamic system design. This can be made easier with the introduction of the total enthalpy equation in CFD analysis.

Before we dive into the total enthalpy equation and its use in CFD analysis, it is important to understand what exactly enthalpy is. In general terms, enthalpy is the sum of all energy content in a thermodynamic system. An enthalpy change is a change in enthalpy as a result of the release or absorption of energy during the formation or breaking of the bond during a chemical reaction.

Mathematically, the total enthalpy of a system can be expressed as:

The above total enthalpy equation indicates that the enthalpy (H) is the sum of the total internal energy (U) and the product of the pressure (p) and volume (V) of the system. When the pressure is assumed constant, the term pV is the work required in the system.

Given the extensive nature of enthalpy, mass, volume, or pressure changes in the system can have a significant effect on the enthalpy outcome. As such, the change in enthalpy (for constant pressure) can be expressed as:

When intensive properties are considered, the specific enthalpy can be measured. This can be calculated as:

In a uniform system, the above formula expresses the dependency of specific enthalpy (h) in comparison to system mass (m). Here, H is the total enthalpy in the system.

The Energy Equation and Enthalpy

We know for the conservation of energy, the equation can be expressed as :

I: Energy increase per unit volume

Implementing the enthalpy and internal energy relationship to the above equation, we ultimately get:

ρ is the density

H is the enthalpy

v is the velocity

q is the heat flux

p is the pressure

τ is the viscous stress

Q is the heat transferred to the system

F is the force per unit mass

This is the equation for the conservation of enthalpy. Oftentimes, the total enthalpy equation can be used as an alternative to the energy equation.

Using the Total Enthalpy Equation for CFD Analysis in Thermodynamics

In a complex thermodynamic system, the enthalpy calculation can be difficult. Solving for heat transfer or energy balance utilizing the enthalpy equation means dealing with different reaction types, pressure, and volume conditions, and in many cases, multiple stages of reactions, increasing the complexity of analysis. Because of this, rather than the manual methods, engineers and system designers now opt for commercial CFD solvers that can help simplify enthalpy analysis in a given system.

CFD simulation packages can provide in-detail analysis and interpretation of energy exchange, pressure, and volume requirements for a reaction as well as help identify power requirements when compressive or non-compressive forces are in action. Through simplified analysis of the total enthalpy equation with CFD tools from Cadence, high-fidelity simulations can be achieved with precise numerical accuracy in complex thermodynamic design and analysis.