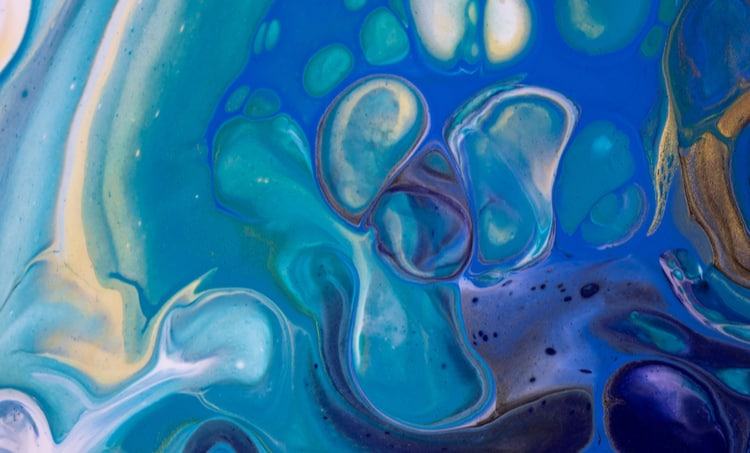 Fluid dynamics is a heavily mathematical discipline that requires careful attention to the physical meanings of differential equations. Among all the equations used in fluid dynamics, Euler’s equations are some of the simplest to work with, particularly within the limits where viscosity and compressibility for a fluid are negligible. Most classes on CFD start with Euler’s equations in fluid dynamics, as they can produce rather intuitive results and are easier to work with than the full Navier-Stokes equations for compressible fluids. Leonhard Euler and the complex numbers being worked with in these euler equation elements typically work with both exponential function and differential equation within this advanced field of mathematics to configure different fluid and fluid element necessities.

What Are Euler’s Equations in Fluid Dynamics?

Euler’s equations are the equations of motion and continuity that treat a purely theoretical fluid dynamics problem where a fluid has zero viscosity, known as inviscid flow. Real fluids are viscous, although some very low-viscosity incompressible fluids, such as water or alcohols, can be treated in certain flow regimes very accurately with Euler’s equations. Because of this fact, Euler’s equations are describing an ideal case where drag in the fluid and energy dissipation is negligible, something which is unphysical and will never be observed in reality. However, we can approximate the Navier-Stokes equations with very low viscosity to get to Euler’s equations.

Momentum portion of the Navier-Stokes equations for viscous compressible flows

In this equation of motion, the second and third terms on the RHS of this equation (proportional to μ and λ, respectively) describe the effects of viscosity on shear and energy dissipation. These are the viscous terms to be removed in order to describe inviscid flow. This brings about four cases where such an approximation is valid:

In this equation, we’ve set μ = 0 and λ = 0, although the latter condition is sometimes subject to debate for nearly inviscid flows. If both μ = 0 and λ = 0 were physically realizable, we would have a case where a fluid that was given some momentum would continue flowing forever and would never dissipate its energy and reach equilibrium. In reality, we may have very small values of μ and λ, which are needed to describe an approach to equilibrium, yet they are not critical to describe flow in high pressure gradients.

In addition to the above equation of motion, we still have the familiar continuity equation describing conservation of mass:

Finally, we have an additional thermodynamic equation that is related to the dissipation term:

Here, we have an equation describing the material derivative of the thermodynamic enthalpy h in terms of the fluid’s thermal conductivity k, the material derivative of the pressure, and dissipation brought on by viscosity. In the case where μ = 0 and λ = 0, the third term on the RHS of the above equation disappears, meaning there is no damping to the motion in the system.

If we take all of the above equations together, we can write them out in a common form, known as Eulerian form: 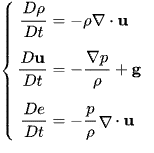 Here, e is an internal energy per unit mass of fluid. The above set of equations is valid for compressible or incompressible inviscid flows.

The aforementioned unphysical problem with dissipation, and one other problem, means that Euler’s equations are only an approximation and cannot easily treat a specific type of flow: turbulence.

A Note on Turbulence

This is where very lightly viscous approximations must be used to describe the flow, meaning the effects of viscosity are accounted for in some way by carrying specific values for μ and λ in some of the above equations. We can still derive a flow field and, for low-velocity flow situations, we will be able to determine a Reynolds number that might put the flow in the laminar regime. However, we might easily see turbulence in such a fluid, as a higher pressure gradient may be required to ensure the inviscid approximation is maintained in Euler’s equations.

While limiting cases of the above equations can be solved by hand in simple systems, 3D systems with complex geometry generally need to be treated with a numerical solver. Commercial CFD simulation packages provide several models and algorithms for calculating solutions to these problems. These applications can help expedite design and evaluation of complex flows, including nearly inviscid flows that might be appropriately described using Euler’s equations. Whether working with imaginary number or linear equation challenges, or working on fluid mechanics math like acceleration within the greater partial differenal equation set of the navier stokes equation, the complex plane of incompressible fluid flow can be account for with eulers equation.

The complete set of analysis and simulation tools in Omnis 3D Solver from Cadence are ideal for defining and running CFD simulations to solve Euler’s equations in fluid dynamics with modern numerical approaches. The Omnis system can also treat compressible flows with turbulence in complex systems, providing a deeper view into turbulence in nearly inviscid fluids. In Cadence’s simulation suite, physical design data is used for grid generation in CFD simulations; you won’t need to manually construct grids or create generation algorithms.