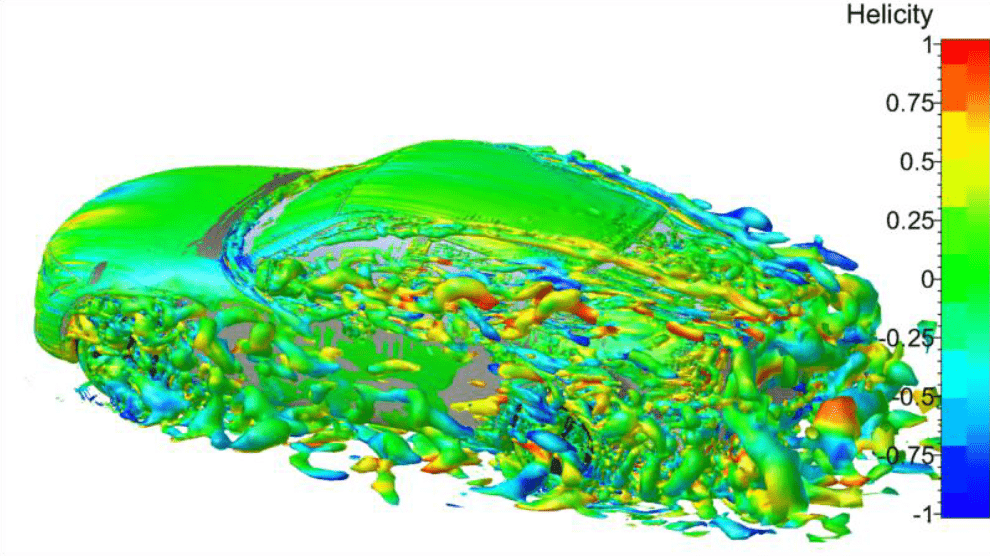 Fluid mechanics is often taught as a highly deterministic discipline, which is technically correct, even down to the molecular level. However, the flow of real fluids can become turbulent, where it is very difficult to predict the specific flow characteristics for every fluid. The study of turbulence is the study of stochastic processes, so we need to relate mechanical quantities like energy and flow rate to statistical quantities like averages and variances.

Turbulent kinetic energy is one such quantitative measure that defines flow behavior and can be used to measure whether a fluid’s kinetic energy is fully delivered to drive a load in a mechanical system. Similarly, for fluidic systems in electronics, such as cooling systems, the deviation from laminar flow in various flow regimes can be described by looking at turbulent kinetic energy versus the portion of fluid energy dominated by laminar flow. In this article, we’ll explore the mathematical processes involved in governing turbulent flow and some important results for quantifying turbulent flow.

The Definition of Turbulent Kinetic Energy

The above definition is provided in Cartesian coordinates and illustrates the role of random variations in the fluid flow rate. If the flow were purely laminar along all three orthogonal directions, then the turbulent kinetic energy would be zero, meaning all kinetic energy would be accounted for in laminar flow. To continue, we need the time-averaged velocity components u’, v’, and w’.

The overbar quantities are mean velocity values, which can be calculated statistically as expected values. The above definition applies to a single component and can be extended to the other velocity components readily.

Finally, knowing that we have these values readily available, we can calculate the material derivative of the turbulent kinetic energy for turbulent flow:

Given that the material derivative depends on some turbulent velocity distribution as a function of time, we can also calculate its rate of change if desired with the above equation. The result can be linked back to the turbulent transport term (div(T)) as well as the work and loss experienced by the fluid. By applying the above equation to flow rate data (measured or extracted from CFD simulations), the forces that are driving turbulent flow can be identified, and they can be reduced if laminar flow is desired.

For most problems involving turbulent flow, using the above statistical definitions is acceptable assuming the following points are true:

If the flow is divergent over the range of integration, such as might happen in an open system with a fluid undergoing simple Brownian motion, the magnitude of the flow fluctuations may increase over time. Because we can have statistical quantities that also change over time in response to a driving force or some characteristics of the system, we need to describe turbulent flow with a stochastic process.

The Underlying Stochastic Process for Turbulence

The above definition treats velocity components as time-dependent statistical quantities, which requires a specific underlying stochastic process to describe these variations. Stochastic processes can account for changes in deterministic and random variations in the mean flow rate (for time-dependent flows with time-averaged fluctuations) as well as the magnitude of fluctuations in the flow rate over time.

Anyone who is interested in examining turbulent flow from a stochastic viewpoint should study Ornstein-Uhlenbeck processes. Several theoretical and simulation studies have examined these processes in different types of systems as well as results for relevant statistical quantities. Two recent works are shown below:

The effects in a system that can drive or hinder turbulent flow, including dissipation, body forces, and system geometry, can be examined by solving the Navier-Stokes equations in a CFD simulation. A designer doesn’t need to know all of the points that will affect a system’s kinetic energy; instead these can be identified through simulations. For electronics systems, this is important for designing active cooling measures like liquid cooling or airflow, as these systems typically prefer laminar flow for efficient convection cooling.

The three major methods used to simplify and solve the Navier-Stokes equations in CFD simulations are direct numerical simulation (DNS), Reynolds-averaged Navier-Stokes (RANS), and large eddy simulation (LES). These methods apply no averaging, time averaging, or spatial averaging, respectively, each giving differing levels of accuracy or total simulation time. These techniques are available in many commercial field solvers, including single-equation models like the Spalart-Allmaras turbulence model. Systems engineers need varying levels of accuracy and speed at different scales and levels of detail to ensure they can fully evaluate their designs.

The simulation features in the Omnis 3D Solver from Cadence are ideal for defining and running CFD simulations with modern numerical approaches, giving you the ability to examine turbulent kinetic energy in your system. In Cadence’s simulation suite, physical design data is used for grid generation in CFD simulations; you won’t need to manually construct grids or create generation algorithms.