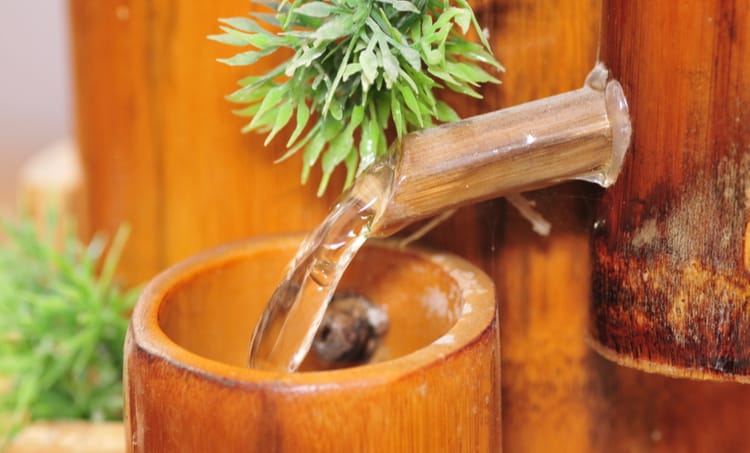 In fluid mechanics, Bernoulli’s equation is a fundamental relation between flow rate, driving pressure, density, and other forces driving fluid flow. This important relation reduces to a basic concept in mechanics, but it has broad applicability to low-viscosity flow fields, particularly to explaining some flow behavior within a system. In this article, we will look at some examples of Bernoulli’s theorem in fluid mechanics and we will walk through how the equation is used to predict changes in flow rates along streamlines or between streamlines.

The Basic Form of Bernoulli’s Theorem

The simplest form of Bernoulli’s theorem.

In this equation, U is the potential energy per unit mass of fluid due to body forces that are not related to pressure. If U is only defined by the gravitational force, then we would rewrite the above equation as follows:

Deriving the above equations from Euler’s equation of motion in fluid mechanics relies on some specific flow assumptions:

Dealing With the Constant

What is the “constant” on the right-hand side of the above equations? This number is equal to the total mechanical energy (kinetic plus potential) per unit mass of fluid, which should underscore the role of Bernoulli’s theorem in reflecting the conservation of energy in laminar flow. This constant is just a number; it is system-specific and does not necessarily need to be calculated. Instead, we care more about the fact that this number is the same along an entire streamline.

Example: Flow Along a Large Pipe

A common application of Bernoulli’s theorem is to predict flow along a pipe that experiences an increase in elevation. This situation is shown below, where the flow proceeds up an incline in the pipe, causing the flow rate to change. 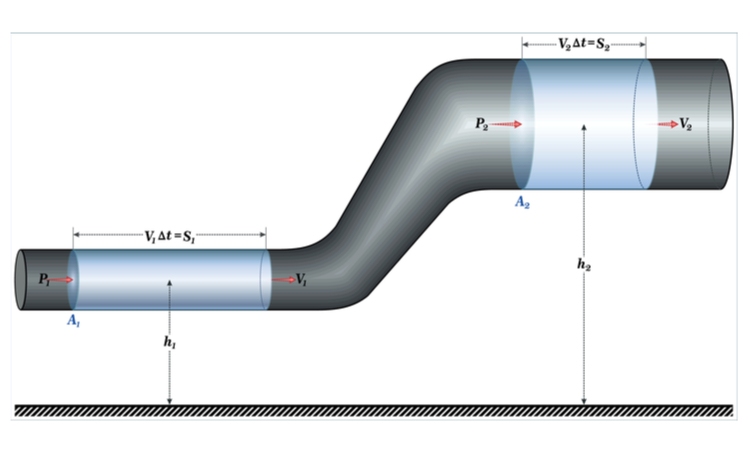 Because the fluid experiences gravity as it flows, we would expect the flow rate to change during the elevation change. The result is a decrease in the flow rate as the fluid moves up the pipe. The distances h point from some reference up to a streamline along the flow, so we can use these values to predict the change in flow rate. If we solve for u2 in the above equation, we would have the following:

If the pressures at the two points are equal, then we would have:

In either case, we can simply plug in numbers for the initial flow rate, the two height values, and the pressures to get the new flow rate. This same procedure is used in tasks like determining lift in aerodynamics, calculating efflux speed for a drain, open channel flow calculations, and much more.

Once the flow becomes excessively viscous or compressible, or once the Reynolds number is large enough that the flow transitions to turbulence, the above relations are no longer applicable. In these cases, the flow becomes unstable and time-dependent, so Bernoulli’s theorem would no longer reduce to a constant in the above relations. In addition, with appreciable viscosity, the frictionless assumption is no longer valid and mechanical energy will not be conserved. For more complex flow situations, CFD simulation tools may be needed to properly simulate flow behavior.

If you’re working with Bernoulli’s theorem in fluid mechanics and you want to verify flow behavior in your systems, you can investigate and simulate flow behavior with the meshing tools in Pointwise and the complete set of fluid dynamics analysis and simulation tools in Omnis 3D Solver from Cadence. These two applications give systems designers everything they need to build and run CFD simulations with modern numerical approaches.