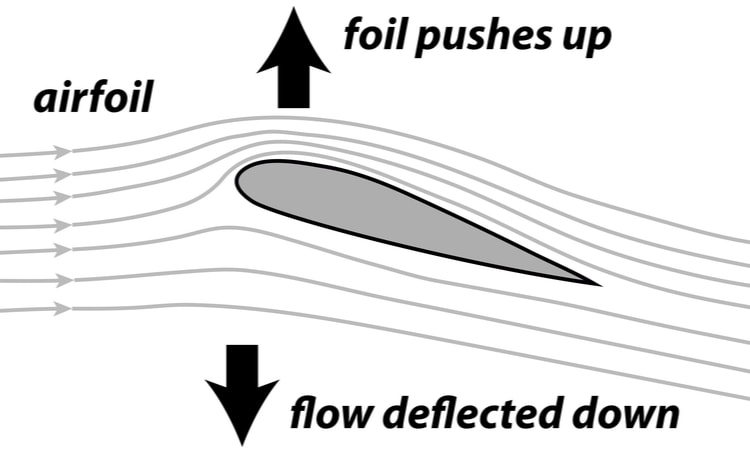 Airflow around a cambered airfoil

If you have ever wondered how planes are able to stay balanced in the air, you might be relieved to know that there is a science behind the seemingly precarious process. The amazing ability of a plane to balance the aerodynamic forces of lift, drag, thrust, and gravity is critical for air travel. Understanding how this is achieved requires knowledge of how air flows around the body and wings of a plane—the latter of which is often a cambered airfoil.

Understanding the Chords of Airfoils

Understanding airfoils or the shapes of aircraft wings begins with knowing the chords. In the case of an airfoil, there are two chords, as shown in the figure below.

Chord line and chord length of an airfoil. From SKYbrary.

A good way to remember the difference between these two chords of an airfoil is that the chord line has no dimensionality, whereas the chord length is a dimension (e.g., ft, m, etc.). Simple enough, right? Well, not so fast. Chord is also used to describe the width of a wing, stabilizer, or rotor blade--for helicopters or some unmanned aerial vehicles--in the direction of airflow. The same is true for the rudder, ailerons (typically used in pairs to prevent roll), and wing flaps (that help reduce the distance required for takeoff and landing). There is also the tip chord, which is the length of the chord at the wing’s tip, and the root chord, which is the length nearest the plane’s fuselage.

From the above, it is apparent that a single aircraft may have several chords. Moreover, chords may be dynamic. Fortunately, there is a standard used for aerodynamics that enables the comparison between different wings and/or airfoil types. 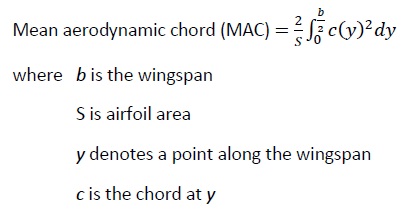 For aerodynamics, the mean aerodynamic chord shown above is the standard by which chords are determined. This equation is used for all airfoil shapes except for a basic trapezoid. For rectangular wings, an important parameter is the aspect ratio that gives the span to the chord length. This parameter is indicative of the amount of lift-induced drag--which is inversely proportional to the aspect ratio--that will be produced by the wing.

For tapered wings, which many cambered airfoils are, the chord is calculated from the equation below.

As shown above, the chord may be calculated for any point along the wingspan, provided the wingspan and airfoil area are known, which is important for aerodynamic study for aircraft with cambered airfoils.

What Is a Cambered Airfoil?

As shown above, there are basically two classifications for airfoils. For symmetrical airfoils, there is no camber and the camber line and chord line are the same. All airfoils that are not symmetric are cambered, which means that the top and bottom areas are not exactly the same and one surface is more convex than the other. Most often the top surface is more convex than the bottom, as this variation tends to create a favorable pressure difference above and below the airfoil that results in greater lift.

How Does Camber Affect Transonic vs. Supersonic Airfoil Design?

Most often camber is designed for maximizing the lift coefficient, as opposed to minimizing the drag coefficient. It is also advantageous to design the airfoil camber such that the tip will go into stall slower than the root. In a contingency, this delay in spinning may enable the pilot to maintain control of the plane.

Cambered airfoils have a virtually unlimited range of possible designs, which is a fantastic tool in the aerodynamic engineer’s toolbox. Practically, however, there are a finite number of common shapes from which to choose where good data is available. Making the best choice depends on the type of aircraft and, to a large degree, the airflow velocity.

For transonic, where airflow speed may be slightly lower and/or higher than Mach 1 or the speed of sound, supercritical airfoils are used. These airfoils are designed to delay the effects of wave drag, which comes into play at these speeds. For both transonic and supersonic speed ranges, common airfoil designs include bi-convex and double-wedge cambers, which are intended to mitigate the shock effect that often accompanies or signifies the presence of wave drag. These foils may be quite thin and have very thin leading and trailing edges. This is in contrast to subsonic airfoils, which may have rounded leading edges.

Whether designing for subsonic, transonic, or supersonic flight and/or fluid flow instabilities, a CFD analysis tool, such as Cadence’s Omnis, is necessary.