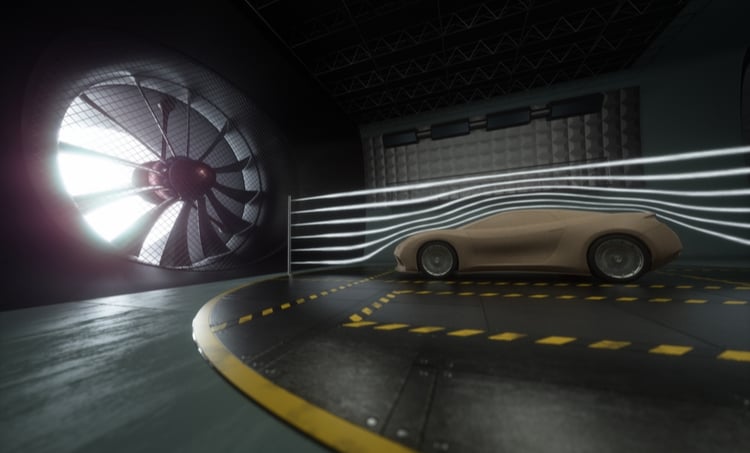 Measuring the drag coefficient of an automobile

When we talk about drag, we are not only referring to the force acting on aircraft. Any object moving through a fluid, or conversely fluid moving across a stationary object, will generate or experience a drag force that resists its motion. The drag force will then determine the amount of force required to maintain motion, thus it is normally preferable for an object to generate as little drag as possible during its motion.

Fluid flow occurs primarily in two regimes: laminar and turbulent. In each regime, the possible flow characteristics will be different, thus the amount of drag experienced by a moving object might be quite different in each regime. The relationship between the drag force and an object’s motion is summarized in terms of a drag coefficient, while the flow regime is summarized in terms of the Reynolds number. Because flow behavior is summarized in both regimes, the relationship between the drag coefficient vs. Reynolds number is important for understanding the operating limits of a vehicle, aircraft, or other object that will move through a fluid.

Drag is related to the relative velocity between the fluid surrounding a moving object. More specifically, the drag exerted on an object by a moving fluid will be some function of the fluid velocity, fluid density, viscosity, and the shape of the object or surface where the fluid interacts. In total, the drag force comprises the sum of two contributions:

This is summarized in terms of an integral relation as follows:

The integrand is a pressure, which might vary across the surface of an object that interacts with the fluid. The coefficient Cf in the integral is not always a constant. It is generally a function of flow velocity, although the flow velocity may itself be a function of space. If the surrounding fluid is compressible, the density can also vary as a function of space and velocity. Therefore, the total drag force exerted on the cross-sectional area must be defined as is shown in the above integral in order to determine the effect on the object’s motion.

Readers that are familiar with the Reynolds number will know this dimensionless quantity can be used as a predictor of laminar or turbulent flow. Once the flow makes a transition to the turbulent regime, the drag force will be larger than for laminar flow at the same fluid velocity. Therefore, when designing practical systems, it is important to examine the relationship between the drag coefficient vs. Reynolds number in each flow regime.

When designing a system that will move through a fluid, it is best to measure drag on the system or determine drag through a simulation. It is often helpful to regress the data back to an analytical model. The problem here is that one model does not normally describe all flow behavior in both regimes and the transition region. Instead, the standard practice is to use measured or simulated data to determine models in each flow regime and then examine where these models intersect to determine a transition region.

In the following examples, the expressions for Cf consider both skin friction drag and pressure drag:

The example below is a common model used to relate the drag coefficient vs. Reynolds number for laminar flow across a sphere:

Approximation for drag in laminar flow

This equation is known to be reliable for a broad range of Reynolds numbers in enclosed geometries. An important takeaway is the rough dependence of drag at low Reynolds number (Re < 36), particularly for incompressible or nearly incompressible flows—we find that the drag coefficient is a nearly linear function of velocity. This is the Stokes regime and it is often the starting point for understanding the effects of drag.

Eventually, the above equation will lose its predictive power as the flow transitions into the turbulent regime, and we need a new model to describe the turbulent drag coefficient vs. Reynolds number.

Turbulent flow, whether compressible or incompressible, requires a different model that is particular to the type of system being studied. One simple model relating the drag coefficient vs. Reynolds number is Prandlt’s power law. This simple model is defined below:

In general, the one-seventh power law described above is not applicable to every system, but it is applicable to a wide range of fluids in pipes or other enclosed systems. Drag exerted by turbulence may follow a more complex model with a different power defining the relationship between drag and turbulence. One article in the research literature that contains a review of models relating the drag coefficient vs. Reynolds number can be found below.

Where Laminar and Turbulent Flow Intersect

Eventually, as the flow rate increases, there is an intersection between laminar flow and turbulent flow, which we call the transition region. In the high Reynolds number regime, we eventually find that, although the drag coefficient is low, the total drag force is large and is a quadratic function of velocity. This is due to the flat profile of the drag coefficient vs. Reynolds number curve deep into the turbulent regime, as shown below. 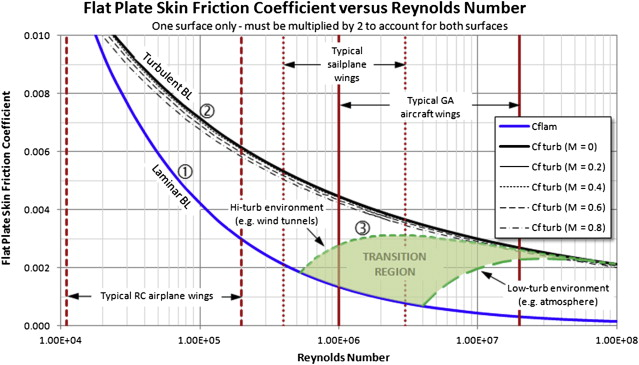