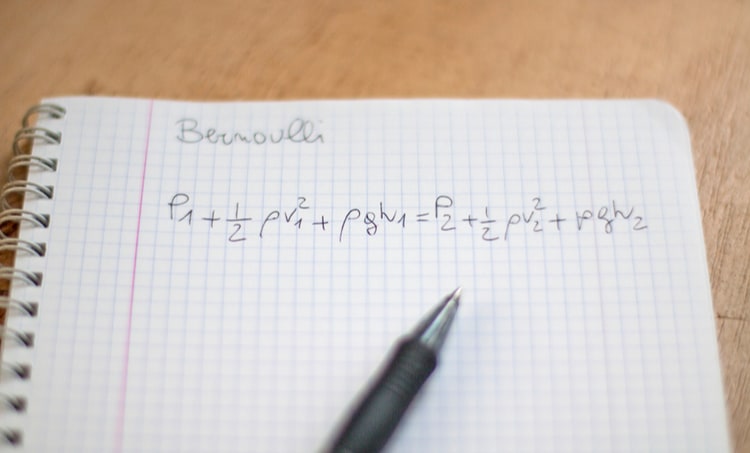 Bernoulli’s principle is a theoretical relation describing fluid flow behavior for incompressible laminar flows. In particular, Bernoulli’s equation relates the flow parameters along a given streamline to the potential energy in the system and the pressure that drives laminar flow. In effect, it is a statement about conservation of energy in incompressible inviscid laminar flow under some simple assumptions. These assumptions can be very nearly realized in many systems, giving Bernoulli’s equation wide applicability.

As Bernoulli’s equation is basically a statement on the conservation of energy for the fluid, we start with a few assumptions:

First, we begin with the quasilinear Euler equation in 3D:

If we now expand the flow rate dot product-gradient term in the Euler equation, we will have terms that vanish thanks to the irrotational assumption shown above. We can also substitute the scalar potentials into the equation. The Euler equation then reduces to:

Now we can collect everything on the LHS of the above equation and pull off the gradient operator from the equation to get the following result:

Applying the steady flow assumption reduces the time derivative term to zero. Here, we have a gradient of a scalar quantity being equal to zero, thus we pull off the gradient operator to arrive at Bernoulli’s equation:

In compressible flow, knowledge of the relationship between fluid density and pressure is needed to determine a form of Bernoulli’s equation for compressible fluids:

If we assume fluid deformation to be purely adiabatic, we would arrive at the following relationship using integration by parts:

Here, 𝛾 is the adiabatic index, which depends on the molecular structure of the fluid. The subscripted density and pressure quantities are stagnation (static) terms. The above relationship allows Bernoulli’s equation to be extended to laminar flows involving gases.

Extending Bernoulli’s principle to unsteady flows requires rewriting the potential energy in terms of small fluctuations about a mean as follows:

If we go back to the gradient equation above, apply this mean-variance transformation, and remove the gradient operator, we have the following equation:

After integrating away the gradient operator, we have a set of constant terms plus a set of time-dependent terms; the latter set of terms is equal to zero. Therefore, we arrive at the following relationship between the potential energy fluctuations and the flow rate fluctuations:

The compressible relationship shown above can also be applied when deriving the compressible form of Bernoulli’s equation, however, this will be left as an exercise for the reader.

The primary task that must be completed before using Bernoulli’s equation in any of its above forms is to determine the flow rate profile for your system. In particular, your CFD simulation software should allow you to visualize streamlines that follow Bernoulli’s equation. From here, you can infer how flow behavior will change when system or fluid parameters are changed, which may eliminate the need to run multiple simulations to understand laminar flows.

When you need to investigate flows and verify the standard application of Bernoulli’s principle, you can build and run high-accuracy CFD simulations using Omnis from Cadence. Modern numerical approaches used in aerodynamics simulations, turbulent and laminar flow simulations, reduced fluid flow models, and much more can be implemented in Cadence’s simulation tools.