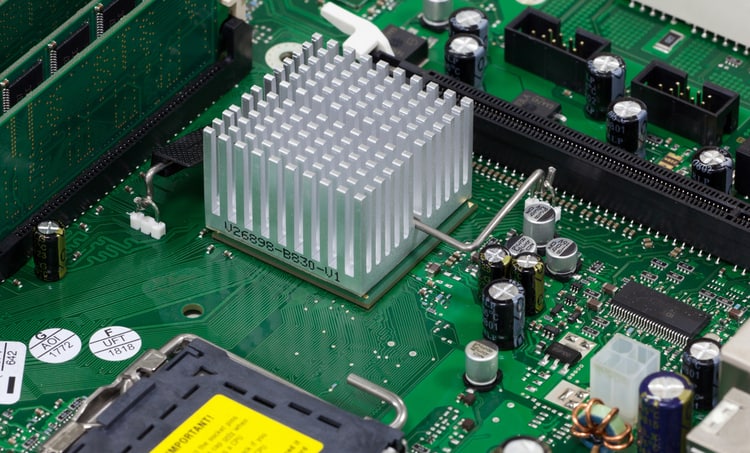 Convection heat transfers can be either natural or forced. Natural convection doesn’t require any external stimuli for initiating the heat transfer process. The temperature of the critical component induces density variation in surrounding fluids, causing fluid flow, which results in natural convection. In forced convection, external forces such as pumps, fans, or wind induce fluid flow.

Let’s look at an example of electronic cooling where combined conduction and convection co-exist.

A heat sink is one of the main thermal management devices used for electronics cooling. Heat sinks are passive heat exchangers that utilize conduction and convection heat transfer modes for heat dissipation from electronic circuits. They transfer heat from critical components to the surrounding medium using conduction and convection, thus helping to regulate the component temperature below the failure thermal limit.

The absence of moving parts is an important factor that directs the dissipation of heat energy from electronic components to heat sinks. The internal distribution of heat energy from the critical component to its surface takes place via conduction. The heat sink attached to the critical component surface transfers heat from the component surface to the heat sink surface also via conduction. At the heat sink surface, extensions, called fins, are arranged for enhancing the heat transfer beyond the plain surface. The heat sinks often come with different fin arrangements such as plain fins, extruded fins, bonded fins, brazed fins, etc. It is the fin arrangement that initiates convective heat transfer around heat sink boundaries.

It can be concluded that fin arrangements are crucial for achieving effective combined conduction and convection heat transfer rates in heat sinks. Celsius Thermal Solver or Future Facilities software can help you in designing your heat sinks for electronics cooling.