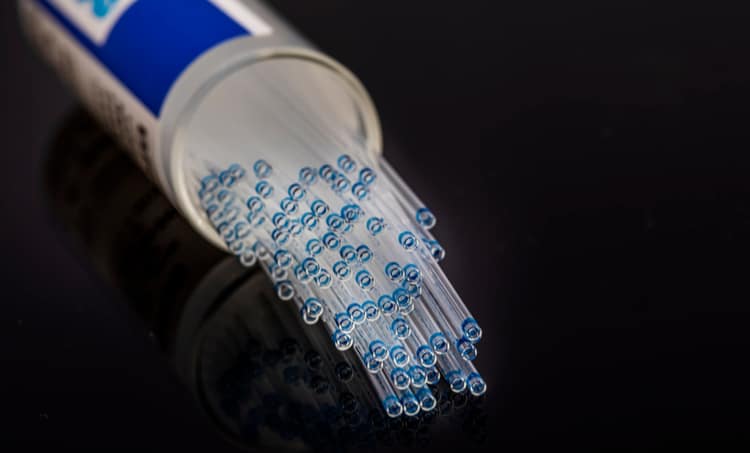 Poiseuille’s law states that the flow rate through a circular pipe is:

This is summarized in a simple equation for the volumetric flow rate:

The various parameters in Poiseuille’s law are shown graphically below. The above equation technically describes the increase in flow rate along a pipe due to an applied pressure gradient, which is assumed to be constant along the length of the pipe.

To derive the above result for Poiseuille’s law, we start by reducing the derivative terms in the Navier-Stokes equation of motion given incompressible laminar flow (i.e., using the divergenceless property of the flow velocity). This gives a simple relationship between the radial component of the flow velocity and the pressure gradient along the direction of the flow.

Since the differential element in the gradient on the LHS is rdr, we can integrate over the pipe radius to get the following function:

This assumes that the pressure gradient in the pipe cross-section is constant (not a function of r). A final integration through the cross-sectional area gives the volumetric flow rate as described by Poiseuille’s law:

In general, because the Navier-Stokes equation of motion is a nonlinear partial differential equation, it could produce a flow rate result that is nonlinear in terms of the pressure gradient, viscosity, and pipe geometry. Therefore, to proceed from dimensional analysis, we simply assume that the flow rate is proportional to some power of the flow parameters:

Given the SI unit definitions of dynamic viscosity, pressure gradient, and flow rate (volume per second), one immediately finds that we must have 𝛽 = -Ɣ in order to eliminate force from the result. Finally, we would have 𝛼 = 4 in order to reach the units for flow rate on the LHS of the above equation. This elementary exercise omits the proportionality constant (π/8) because that value is particular to a circular cross-sectional area. In general, for a non-circular cross section, the proportionality constant could be different and will depend on the coordinate system used to describe the cross-sectional area of the pipe.

From here, a relationship between the differential elements can be determined and substituted into the derivative relationship shown above.

The use of dimensional analysis and Poiseuille’s law fails in two situations that are not mutually exclusive:

For example, gases are compressible, so they might not have the same strict fourth power dependence between flow rate and pipe radius. Similarly, the flow rate may not be a linear function of pressure gradient; this is known to be the case for gases undergoing isothermal compression. The gas could compress without a significant increase in dynamic viscosity, so we would not have a fourth-power change in flow rate. In turbulent flow, we would, at minimum, have a gradient defining the velocity change across the pipe cross section. Accounting for both factors requires CFD simulations to determine the flow rate and its dependence on pipe cross section in enclosed flows.