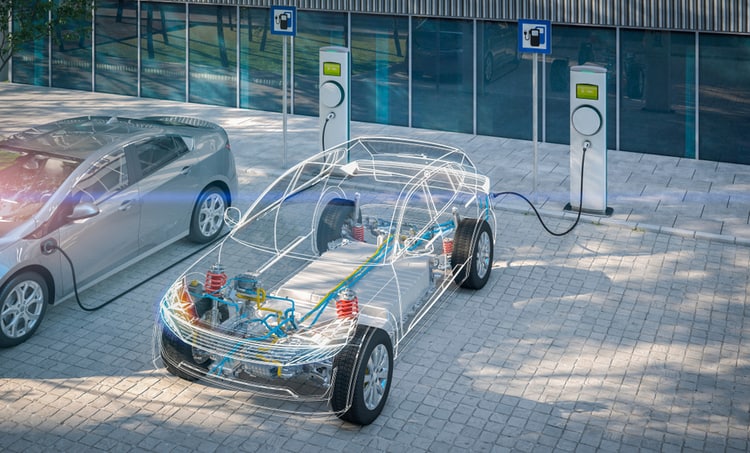 Let’s discuss the two types of EMI in electric vehicles.

The conducted EMI in electric vehicles can be linked to inverters. The DC-AC converter or inverter in electric vehicles usually uses insulated gate bipolar transistors (IGBT) or metal-oxide-semiconductor field-effect transistors (MOSFETs) as switching devices. These devices are switched on and off at high frequencies. High-frequency switching is employed for reducing the size of the magnetics (associated elements such as transformers, inductors, filters, etc.), current ripples, and acoustic noises. However, this fast switching causes sudden changes in voltages (dVdt) and currents (dIdt), which result in the generation of conducted EMI.

The conducted emissions in electric vehicles are characterized by high spectral content within a frequency band starting from the fundamental switching frequency. Conducted EMI in electric vehicles can be summarized as any electromagnetic disturbance that is transferred to the target from the source via conducting path. A conducting path can be the DC power bus, AC power bus, cables, wires, or traces. In the case of conducted emissions generated from inverters, the EMI spreads through the DC power bus.

The voltage fluctuations in an electric vehicle during the fast switching of power electronic devices in the inverters produces conducted emissions. Usually, conducted EMI causes common-mode currents in the vehicle’s metallic chassis. The common-mode currents in the chassis induce radiated EMI. From the vehicle chassis, the EMI radiates to interfere with the internal system as well as external vehicles and electronic equipment.

As aforementioned, conducted emissions from the inverters propagate through DC power bus cables and AC power bus cables to the battery and motor, respectively. This conducted EMI couples with electronic circuits in the form of crosstalk and interferes with signal interconnects. The digital signal systems utilized in vehicular electronics architecture typically use isolation between high and low voltage domains. The high impedance path offered by the isolation hinders conducted EMI from reaching the secondary side, and currents are made to travel back to the source. These currents cover large loop areas and initiate the generation of radiated EMI affecting signal electronics.

Irrespective of the type, EMI in electric vehicles impairs the normal functioning of the electronic systems in them. The most common malfunctions are experienced in audio systems, engine control units, GPS navigation systems, antilock braking systems, air-bag controls, car alarms, collision warnings, and avoidance controls. As the strength of the EMI field in electric vehicles increases, the severity of the electromagnetic compatibility issues also increases. Cadence software can help you implement EMI mitigation techniques and EMI shielding methods in your electric vehicle design.