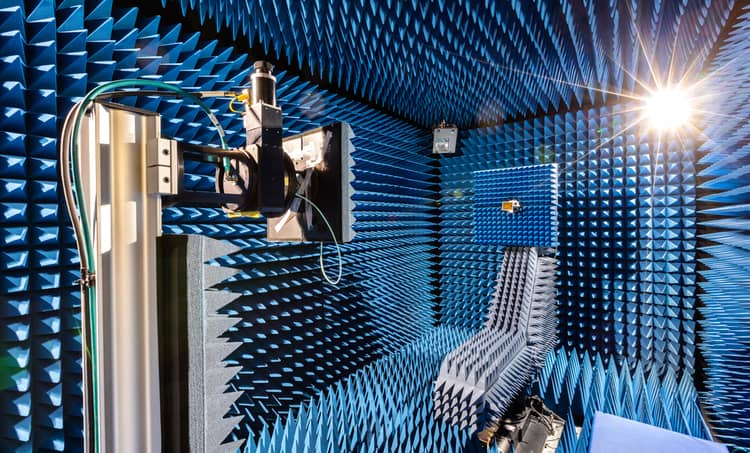 Designing compact electronic circuits that are electromagnetically compatible is one of the biggest challenges for engineers. With the increasing demand for high power density designs and circuit miniaturization, circuits are downsized by placing active and passive components in close proximity. This compact arrangement of components makes them viable to electromagnetic interference (EMI) coupling mechanisms such as conducted EMI, capacitively or inductively coupled EMI, or radiated EMI.

In this article, we will discuss different EMI coupling mechanisms while emphasizing the measurement setups for radiated EMI.

Electromagnetic interference is any unwanted signal that is injected into an electronic circuit from a source and impacts the normal workings of the circuit. An electronic circuit is a victim of EMI when its working is affected by EMI. The same circuit can act as a source, thereby disrupting the operation of nearby devices and equipment.

In electrical and electronic circuits, conductive coupling happens when EMI emissions are transported from the source to the victim via conductors, wires, or cables. The coupling path in conductive coupling is characterized by impedance and is responsible for the voltage drop associated with conducted emissions.

There are two types of EMI conductive coupling:

When two devices or electronic circuits are connected and there is a varying voltage source, the charge is capacitively transferred from the source to the victim. This is called capacitive coupling.

Other than anechoic or semi-anechoic chambers, GigaHertz transverse electromagnetic (GTEM) cells can be used to conduct radiated emission testing. A GTEM cell is a tapered double conductor transmission line with a constant characteristic impedance of 50 Ω. The inner walls of a GTEM cell are covered with microwave absorbers. The smaller end of a GTEM cell acts as an input-output port and is connected to the spectrum analyzer. Compared to OATS and anechoic chambers, the GTEM cell is a compact, affordable, and appropriate option for 0 Hz to 20 GHz.

A high-quality factor (Q factor) metallic enclosure where the transmitting antenna, receiving antenna, and EUT are placed forms a reverberation chamber (RC). An inhomogeneous electric field is created inside the RC due to the standing waves arising from the metallic boundary. Metallic paddles, called stirrers, placed inside the RC can modify the boundary condition of the chamber. The RC is accurate and reliable compared with its counterparts and gives results in a shorter period.