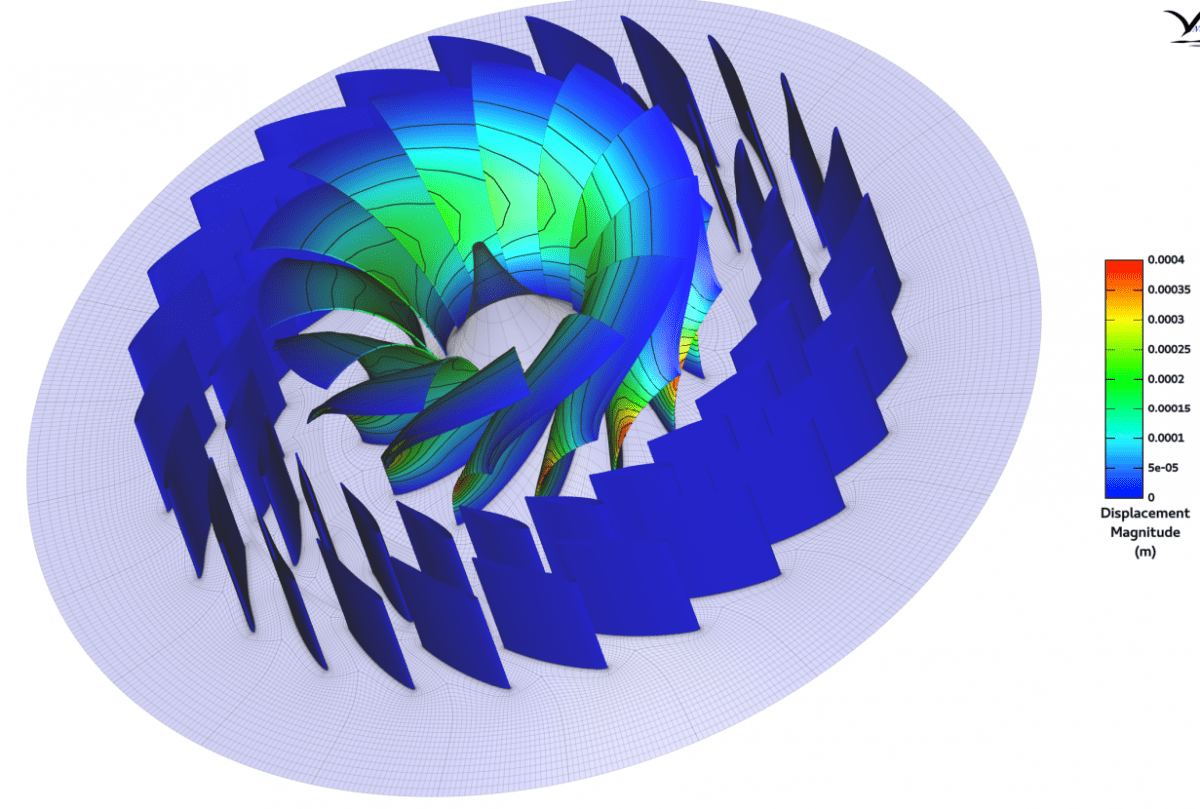 Turbulence is difficult to describe mathematically, as it deals with randomness, complex flows, high sensitivity to initial and boundary conditions, and much more. Most students get a gentle introduction to turbulent flow from the Navier-Stokes equations and Reynolds number. It’s easy to see that excessive flow velocity, large length scales, surface roughness, and low viscosity are ingredients for a transition from laminar to turbulent flow, but what happens to the fluid once turbulence begins?

CFD problems are difficult to solve analytically, thus numerical techniques and simplified models have been created to describe fluid flow in any regime, including turbulent flows. The Spalart-Allmaras turbulence model is useful in that it helps make the Reynolds-averaged Navier-Stokes equations solvable, and it is available in some commercial field solvers. In this article, we’ll explore this alternative model and some of its advantages in numerical simulations.

The main governing equations in fluid dynamics that describe fluid flow under the effects of externally applied forces are the Navier-Stokes equations. These equations are powerful in that they have the capability to describe the effects of any force acting on a fluid and the resulting flow behavior. However, they cannot be solved in closed form for every system or flow situation. Therefore, a few numerical approaches have been developed to reduce the complexity of CFD simulations:

The Spalart-Allmaras turbulence model is a RANS approach that involves a single governing kinematic equation to describe viscous eddy current flow. The model was specifically derived for use in aerodynamic applications involving wall-bounded systems as well as in turbomachinery applications. The model includes multiple parameters and coefficients as part of a simulation, but because there is only one dynamic differential equation to solve, it is computationally much simpler than a DNS approach. In particular, this one-equation model allows simpler resolution of the eddy viscosity near a system boundary (such as a wall).

Advantages of the Spalart-Allmaras Model

Some advantages of the Spalart-Allmaras turbulence model include:

Despite its advantages, it has some limitations in that it is unreliable for describing decay of turbulent flows and its applicability beyond wall-bounded systems is still questionable. However, research into variations of Spalart-Allmaras turbulence models remains a contemporary research topic and its applicability in broader systems with turbulent flow continues to be investigated.

The goal in this equation is to determine the turbulent eddy viscosity, which is determined from:

In these equations, the molecular kinematic viscosity is 𝜈 = μ/⍴, the fluid density is ⍴, and μ is the fluid’s molecular dynamic viscosity. The other parameters in the model are given in terms of the distance from the field point to the nearest wall d, and the vorticity magnitude

. We have the following definitions:

One can see several constants in the above definitions. These constants are defined as follows:

As the system under consideration is bounded by a wall, we have a stationary boundary condition along the surface of the wall. Other boundary conditions might be imposed elsewhere in the system, although it may be doubtful whether these will interfere with resolving the eddy current away from the wall itself. Finally, we have the following condition on the far-field Spalart–Allmaras variable:

Various references will have these equations shown in different forms, where some simplifications may be applied to omit some constants or simplify the presentation. The form of the model shown here was provided by NASA and is considered a “standard” form of the model. More information on this form and corrected forms of the Spalart-Allmaras turbulence model can be found here.

Variants of the Spalart-Allmaras Model

In the linked page from NASA, there are 18 variants on the “standard” Spalart-Allmaras model, all of which are intended to extend the model’s validity into domains where curvature, rotational flows, excess vorticity, roughness, and other effects govern flow characteristics. Two important extensions that are not mentioned by NASA include:

As is the case with model variants in many fields, these approaches provide alternative strategies for specific situations in various systems, generally yielding more accurate results.

Usage of the Spalart-Allmaras Model and Its Variants

Although the Spalart-Allmaras model is designed for specific cases of wall-bounded incompressible flows, it continues to be researched for its applicability in other systems. Many examples can be found on the aforementioned page from NASA. In addition, it can be applied to compressible turbulent flows with a simple correction term that modifies the turbulent dynamic viscosity. Such a modification does not substantially increase the complexity of these computational models. Many of today’s commercial field solvers can be used to solve this model and its related forms.

The simulation features in the Omnis 3D Solver from Cadence are ideal for defining and running CFD simulations with modern numerical approaches, including the Spalart-Allmaras turbulence model. In Cadence’s simulation suite, physical design data is used for grid generation in CFD simulations; you won’t need to manually construct grids or create generation algorithms.