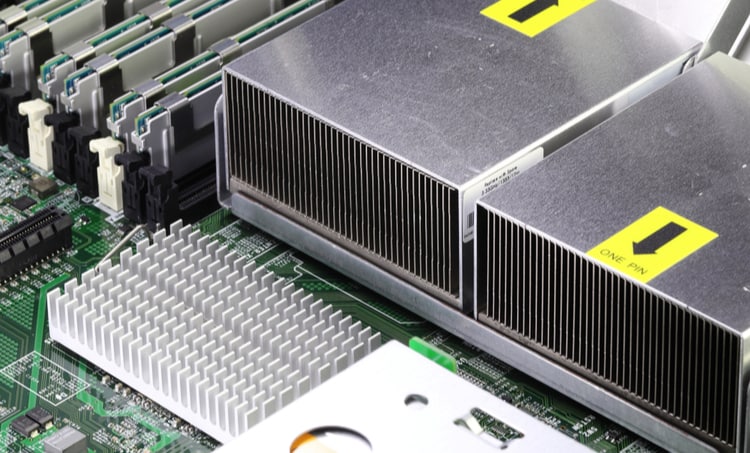 In electronics, qualitative estimation of heat flow is helpful for conducting a feasibility analysis of electronic components. The design of a component varies with the heat generation in a circuit. Proper electronics cooling mechanisms are required for removing heat from components. Various engineering approaches can be utilized for estimating the heat generated in each component and to plan the best cooling method.

Note that ΔT is the temperature difference driving the heat flow and P is the power dissipated in Watts.

Thermal resistance can be conveyed using several expressions. The expression varies with the dependency of the heat flow with temperature and the mode of heat transfer. The thermal resistance of an electronic component is different when the heat is transferred via conduction, convection, radiation, or a combination of them.

Let’s consider a one-dimensional (1-D) steady state heat transfer problem in electronics where heat flow is proportional to the temperature difference. Heat flow can be given by the following equation:

In the above equation, Q is the heat flow, k is the thermal conductivity, A is the area perpendicular to the heat flow, and Δx is the heat flow distance. Applying Ohm’s law on the electrical analogy of the component of interest, the temperature difference analogous to voltage can be expressed as:

From the above equation , thermal resistance can be written as:

Substituting the second equation in the fourth equation, thermal resistance can be expressed as:

Per the last equation, the value of thermal resistance varies with the size, shape, and area of the electronic component under consideration. It is important to design electronic components with  the thermal power dissipation, voltage, and current rating in mind.

Heat generation is critical for the functioning and lifespan of a component. Implementation of a proper cooling mechanism is mandatory in electronic circuits where the excessive heat generated can damage the circuit when left unattended.

Junction to Ambient Thermal Resistance, ΘJA: The thermal resistance from the junction to ambient is the measure of the semiconductor component’s ability to dissipate heat energy from the surface of the die to the ambient via all paths.

Junction to Case Thermal Resistance, ΘJC: The thermal resistance from the junction to the case (package) represents the resistance to the flow of thermal energy to the semiconductor  package surface through a specific conductive thermal path.

It is hard to find electronic circuits without semiconductor components such as integrated circuits, solid-state relays, and power electronic switches. Thermal resistance equations can be utilized for finding out the thermal resistance of these components to model the electrical analogy for thermal performance analysis.

Cadence’s suite of design and analysis tools can simplify the thermal performance analysis of any type of electronic component. Subscribe to our newsletter for the latest updates. If you’re looking to learn more about how Cadence has the solution for you, talk to our team of experts.