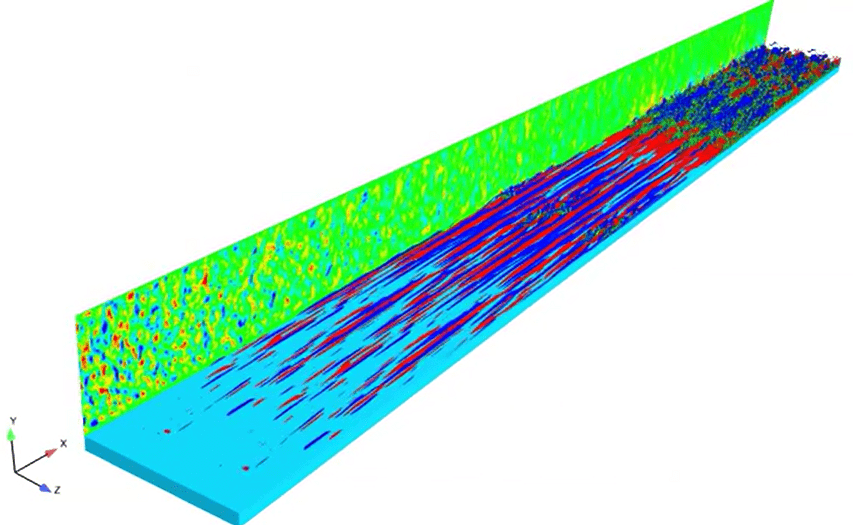 The transition of flow from laminar to turbulence along a closed channel. Transition can be seen in effect at various points during the flow.

The nature of flow and the representation of its attributes is a matter of utmost importance for engineers and system designers working on a fluid flow system. Usually, the flow involved can be classified as either laminar or turbulent. However, there is a phase where the flow shifts from laminar to turbulent but doesn’t completely exhibit either flow behavior. This is called the transitional phase of the flow.

During flow analysis, it may be difficult to point out exactly when this transition starts. During CFD simulation, the computation of the Reynolds number can help in determining the progression of the flow behavior from laminar to turbulent. The measurement of the transition Reynolds number can be beneficial in adjusting to velocity and pressure variations that a fluid system may encounter.

The Transition From Laminar to Turbulent Flow

In any fluid system, there can be various stages to a flow depending on the flow velocity, fluid viscosity, or structural complexity. Most flows are observed to be in laminar or turbulent regimes.

Laminar flow is associated with low velocity and high viscosity, which promotes streamlined and parallel-layered flow. The flow deviates from its streamlined path when the velocity of the flow increases to cause turbulence. The state of flow between laminar and turbulence is considered to be a transition flow, which can commence at a random point during the flow.

As a predicter of flow, the Reynolds number is helpful in indicating these different flow regimes during fluid system analysis. Reynolds number can be mathematically expressed as:

ρ is the density of the fluid

𝑣 is the fluid velocity

μ is the fluid viscosity

D is the hydraulic diameter (of pipe, tube, or duct)

In a closed flow system, such as in a pipe, the transition Reynolds number is between 2300 to 3500. Below 2300, the flow is fully laminar, while above 3500, the flow is fully turbulent. The transition Reynolds number indicates that the flow has encountered a change in momentum. This can happen due to a range of factors—like surface roughness, change in viscosity due to heat transfer, or disturbances like noise or vibration—affecting the stability of the flow.

The Transition in Boundary Layers Over a Flat Plate

When considering Reynolds number for flow over a boundary layer, it is important to note that most flows are laminar; however, they transition to turbulence with the influence of the overall flow. This is also true in the case of boundary layer flows over a flat plate. Instability can be observed starting at the point where the transition Reynolds number (Re) is greater than 500,000.

The scale of transition is influenced by surface roughness, which has a direct impact on the shear stress. A rough surface means the turbulent forces are much more prominent than the viscous forces closer to the wall. The viscous and laminar boundary layers thereby convert into turbulent ones, influencing the heat transfer properties of the flow.

The roughness effect calculation can be done using the following formula:

In the above equation, ks is the length scale of the roughness element, u is the friction velocity, and v is the kinematic viscosity. Using this formula, we can deduce the smoothness of the flow in the boundary layer. The following can be inferred:

Computational fluid dynamics (CFD) has been used in a wide range of flow studies. At different Reynolds numbers, designers can use CFD to determine the flow behavior and its attributes in relation to boundary layer characteristics. This includes accounting for shear stress, surface roughness, and heat transfer during laminar or turbulence modeling. CFD modeling involving turbulent or transition Reynolds numbers can be done using a large eddy simulation (LES), direct numerical simulation (DNS), or the Reynolds-averaged Navier-Stokes (RANS) equations.

The computation and simulation capabilities of Fidelity and Fidelity Pointwise can help simulate flow behavior at each point to identify variations in flow parameters. By running high-fidelity CFD simulations, an ideal flow design can be achieved for complex geometries.