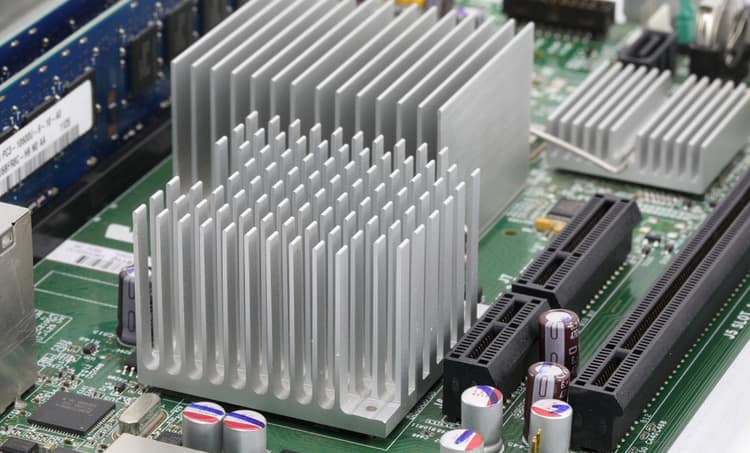 Highly populated circuit boards are often incorporated into complex systems to increase profitability. To improve the performance of such high-density boards, electronics cooling is employed to transport heat. Electronic thermal management using heat sinks for cooling depend on the heat dissipation, airflow, cost, and size of the design.

Finned heatsinks and heat exchangers are common thermal management systems used for heat transfer from electronic components. The performance of heat sinks is influenced by the material, heat sink geometry, fin spacing, and the Reynolds number of airflow or any coolant fluid flow. In this article, we will discuss the role of the Reynolds number of airflow in heat sink performance.

Airflow or fluid flow is a major factor that influences heat sink performance, especially in forced convective heat transfer. Reynolds number of airflow plays an important role in bringing out the optimal performance of a heat sink.

Reynolds number is the ratio of inertial forces to viscous forces and this number categorizes fluid systems. It reveals the effect of fluid viscosity in controlling the flow pattern or velocity of the fluid. Mathematically, the Reynolds number can be given by the following equation:

The Relationship Between Reynolds Number of Airflow and Heat Sink Performance

Flow type is an important factor in increasing the cooling efficiency and performance of a heat sink. As an example, let's consider an impingement airflow heat sink with pin array fins. A jet of air impinges through a nozzle onto the heat sink for fast heat removal. In the above-mentioned thermal management system, the Reynolds number can be defined as: