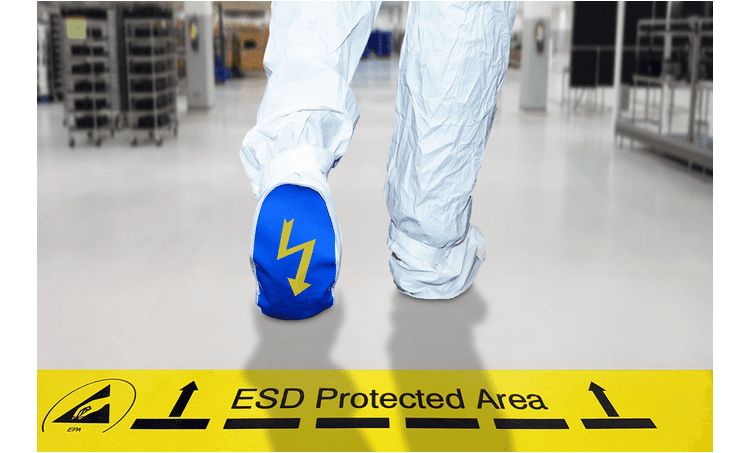 To control ESD, electronic components and circuits must be handled in an electrostatic protected area

The impact of ESD on electronic components varies. In integrated circuits, ESD may cause contact damages, burnouts, interface damages, or ruptures. The effects of ESD on capacitors or resistors can be a variation in the tolerance values.

Irrespective of the component type, ESD is harmful to the life and performance of electronic components. Sometimes, the consequences of ESD are catastrophic. Other times they cause parametric failures or latent damages. Hardware engineers need to be aware of the basic principles of electrostatic discharge control to prevent these damages. In this article, we will discuss some fundamentals of ESD as well as basic principles of ESD control.

What Is Electrostatic Discharge?

Electrostatic discharge is the release of static electricity between two electrically charged objects in contact. In ESD, there is a build-up of charges between two surfaces. When the surfaces rub against each other, the charges move, causing excess charges on one surface and deficiency on another. The movement of charges due to electrostatic discharge causes current, called ESD current, to flow in objects.

Besides ESD currents being caused by contact with charged conductors, there are a few other ways in which ESD-sensitive components can be affected by ESD. The human body or packaging materials may discharge through electronic components and cause ESD. In rare cases, field-induced ESD also occurs in electronic circuits.

How Electrostatic Discharge Is Generated

The three mechanisms through which ESD can be generated in electronic circuits are:

When two charged bodies of different electric potentials come in contact, ESD is generated by conduction. The charge flows from the body at the higher potential to the one at the lower potential, continuing until the two bodies become equipotential.

When there is a conducting path, the capacitors formed through inductive charging in the conductor discharge, and the accumulated charges decrease. Usually, ESD due to inductive charging is characterized by high current pulses lasting up to microseconds. This high level of current is capable of damaging sensitive electronic circuits.

The Principles of Electrostatic Discharge Control

Controlling ESD in electronic circuits is a very challenging task, especially with circuit miniaturization. The task of ESD control needs to begin right from circuit design. Here are some basic principles for ESD control.

The principles of electrostatic discharge control can be customized depending on the susceptibility of the electronic circuit to ESD. As the number of ESD-sensitive components increases with circuit miniaturization, more care needs to be given to preventing ESD.

Cadence can support you in developing ESD control methods for your circuit. Subscribe to our newsletter for the latest updates. If you’re looking to learn more about how Cadence has the solution for you, talk to our team of experts.