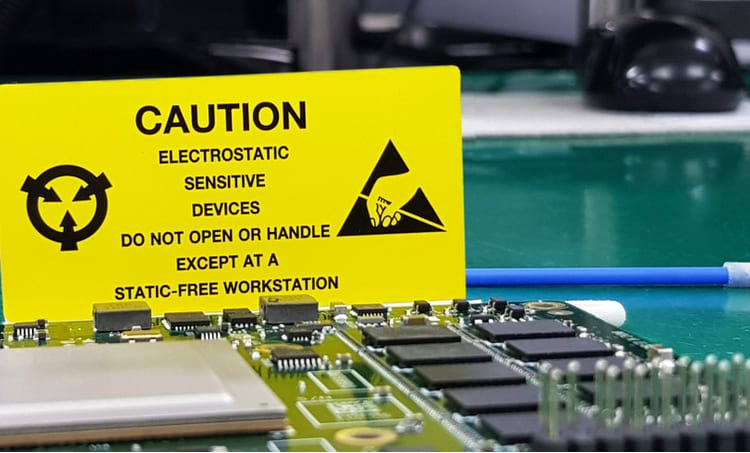 Electrostatic discharge (ESD) is one reason electronic circuits or devices might malfunction. Generally, the environment where circuits or devices are placed is prone to static electricity, and the effects of ESD on electronic systems can be catastrophic. The effects of ESD include memory corruption, temporary failures, unexpected latch-ups, or, at times, complete damage to the electronic system. To some extent, the unreliability quotient of electronic circuits can be linked to ESD. That is why it is important to take precautions against ESD.

In this article, we will explore ESD and its effects on electronic circuits in further detail.

Electrostatic discharge is the release of static electricity between two electrically charged objects in contact. In ESD, there is a building up of charges between two surfaces. When surfaces rub against each other, the charges move and cause excess charges on one surface and deficiency on another.

All objects are capable of generating electrostatic charge. Usually, the contact and separation of the objects contribute to ESD. A common example of ESD is the static discharge generated by the human body. When a person touches an electronic component, the voltage pulse generated in their body gets transferred to the component.

The mechanisms responsible for ESD are triboelectrification, conduction, and inductive charging.

Triboelectrification results from two different materials coming in contact and then separating. It is a contact charging process where there is a transfer of charges from one object surface to another. The amount of charge generated in this kind of static discharge depends on the area of contact, friction, and pressure, and the material property influences the polarity of charges on the contact surfaces.

In ESD generated by conduction, two charged bodies of different electric potentials come in contact. The charge flows from the body at the higher potential to the one at the lower potential. This process continues until the two bodies become equipotential.

Capacitors formed through inductive charging in the conductors discharge when there is a conducting path and the accumulated charges decrease. Usually, electrostatic discharge is characterized by high current pulses lasting up to microseconds. This high level of current is capable of damaging sensitive electronic circuits.

The Effects of ESD

ESD is a mini version of lightning. As static charges get a conductive path, ESD currents travel to the ground via all available paths in electronic circuits. The paths may involve semiconductor junctions, integrated circuits, or sensitive electronic components. Let’s take a look at how ESD affects each.

The two principal device technologies in semiconductor electronics, bipolar and metal oxide semiconductors (MOS), are vulnerable to ESD. This sensitivity to ESD appears as insulation breakdown, thermal overstress, metallization failure, or the migration of materials in MOS and bipolar semiconductor devices. ESD is capable of developing failure modes in PN junctions both at forward and reverse biased conditions.

ESD current flow in ICs forms holes in chips. ESD can increase the heat generation in ICs above the temperature limit and cause thermal damage to all components and systems in the vicinity.

The effects of ESD are detrimental to the reliability and shelf life of electronic circuits. ESD currents take all possible paths to reach the ground, and, in that process, damage the components and systems in their path. Some ESD damages are catastrophic and others are latent failures. It is always advisable to incorporate ESD protection in electronic circuits to ensure longevity and reliability during manufacturing, testing, freight, and handling. Cadence software can help you design ESD protection circuits for sensitive electronic systems.