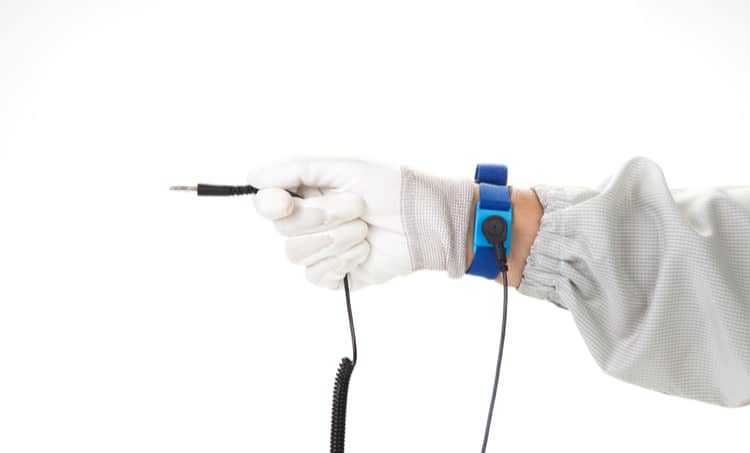 Failing to adhere to ESD precautions and proper handling procedures as requested by component manufacturers can result in performance degradation or, in extreme cases, failures. As electronic parts get downsized, their sensitivity or susceptibility to ESD increases. Ignoring the ESD susceptibility of electronic components and circuits can result in monetary losses. Therefore, everyone, from the personnel working in inventory to engineers who are using the components for hardware realization, must follow proper ESD precautions and handling instructions to prevent ESD damages. In this article, we will discuss a few recommendations and procedures that can limit the failures caused by ESD.

ESD is the release of static electricity between two electrically charged objects in contact. In ESD, there is a building up of charges between two surfaces. When surfaces rub against each other, the charges move and cause excess charges on one surface and deficiency on another.

All objects are capable of generating electrostatic charges. The movement of charges due to electrostatic discharge causes current to flow in objects. In sensitive electronic circuits, ESD induces ESD currents when a charged conductor comes in contact with it. Otherwise, the ESDS component discharges to the human body or packaging materials and causes ESD. In rare cases, field-induced ESD also occurs in electronic circuits.

Electronic Failures Due to ESD

Electronic circuits, devices, or components fail due to ESD in two ways:

To avoid these failures, it is important to consider ESD precautions and proper handling procedures when dealing with sensitive electronics. Let’s discuss some of the recommendations to avoid the ill effects of ESD.

Some of the important ESD precautions and proper handling procedures are below:

Careless handling of ESDS components can degrade their reliability and life expectancy. While handling ESDS components, ESD precautions and proper handling procedures should be followed to prevent ESD failures. In mission-critical circuits, ESD control recommendations are strictly followed, as ESD-induced failures in such circuits cannot be tolerated at any cost. Cadence software offers ESD analysis tools that help with electrostatic discharge prevention in mission-critical electronic systems.