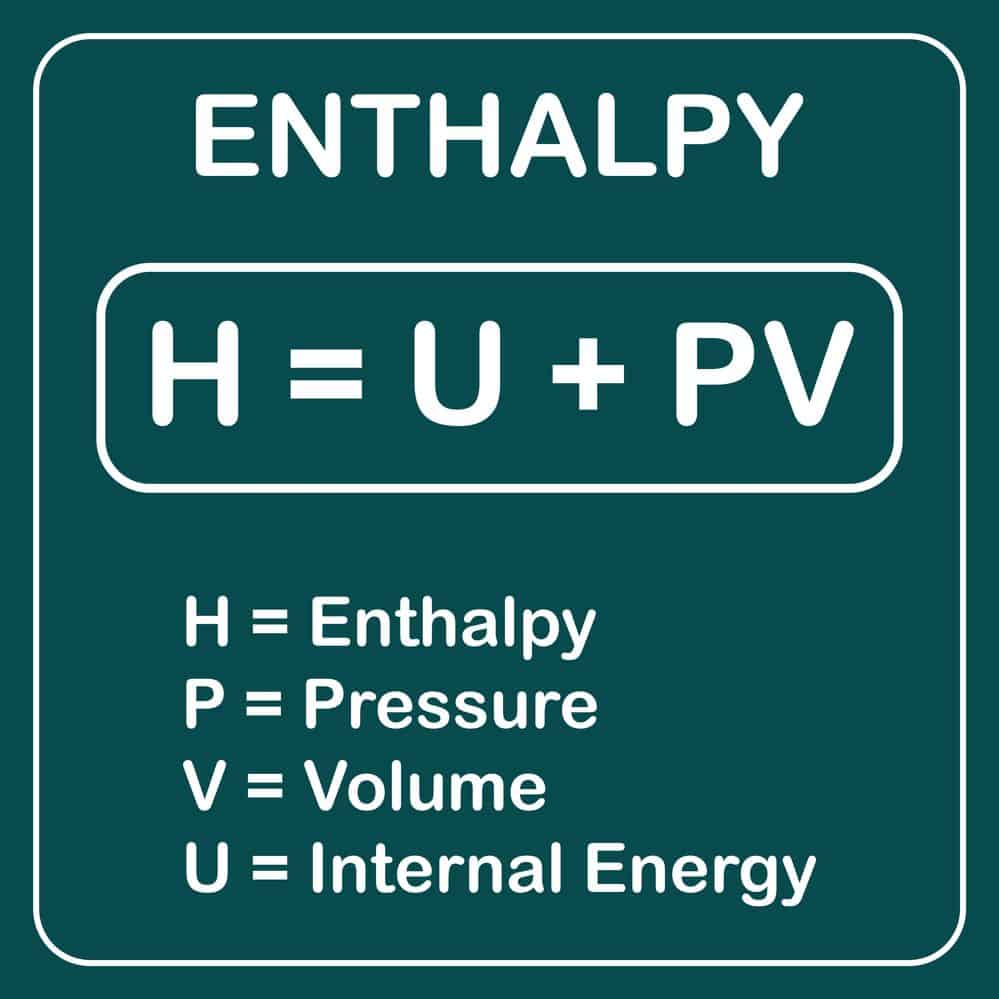 The general law of thermodynamics deals with quantities like temperature, heat, work, internal energy, and their relation. These relations often establish the interlink between the science of thermodynamics and fluid dynamics, where concepts such as fluid flow and heat transfer can be utilized to perform the work within a system. An example where this can be observed thoroughly is in engines or heat transfer machines where working fluid can drive the thermodynamic cycle.

Discussing Change of Enthalpy in Thermodynamics

Enthalpy is the total heat absorbed or released in a thermodynamic system. Mathematically, it is often described as the sum of the internal energy and the work performed:

H is the enthalpy, U is the internal energy, p is the pressure, and V is the volume of the fluid system. The product of pressure and volume is the work performed. Generally, the enthalpy change in the system is the desired calculation, as it simplifies the energy transfer analysis. As such, the above equation can be written as:

For a closed system, the first law of thermodynamics holds true, according to which the total energy remains constant. This can be expressed as:

Q is the heat energy supplied to the system and W is the work done.

The relation between enthalpy and internal energy can also be established by studying temperature relations. According to the second law of thermodynamics, for absolute temperature T and entropy S:

The above equation for change in internal energy can be written as:

This can be further simplified to get:

The increase in temperature of the system induces kinetic energy, which changes the internal energy of the system. This also influences the enthalpy change within the thermodynamic system.

When the fluid and its thermodynamic properties are the driving factors of energy transfer in a system, the calculations of variables like enthalpy, internal energy, and temperature become critical. The enthalpy equation establishes the understanding of heat transfer and power requirements for the system to operate. The numerical solution for temperature requirements can be determined for the enthalpy and internal energy changes to occur. In the case of compressible flow, pressure and power requirements can be calculated from the enthalpy equation. The calculation can be complex for incompressible flow given the challenge to establish the relationship between temperature, pressure, and density of the working fluid. In such a case, the Navier-Stokes and continuity equation can be applied.