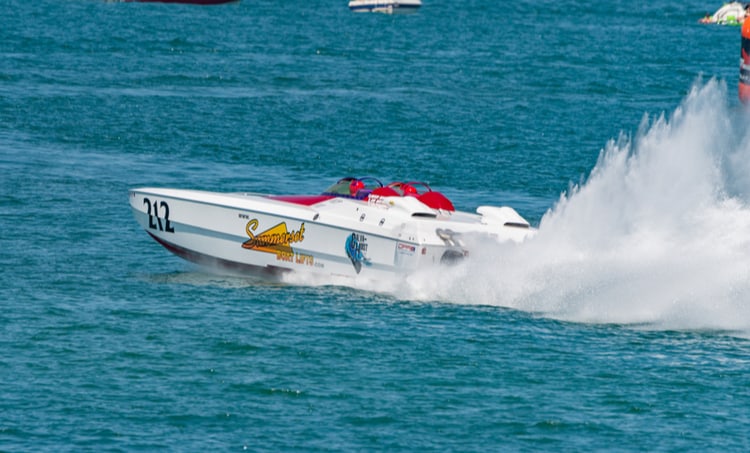 Any object that moves through a fluid with non-zero relative velocity will experience drag through multiple mechanisms. Drag will be affected by the fluid flow regime across the body (laminar vs. turbulent) as well as the surface characteristics of the body. However, the cross-sectional geometry of the body is also important, as this will affect the pressure felt by the object during its motion. Both contributions must be considered in hydrodynamics problems.

In practical problems involving aircraft or watercraft, hydrodynamic drag will be the major contributor to drag on an object. Below, we’ll outline the causes and effects of hydrodynamic drag and provide a comparison to skin friction drag.

The term “hydrodynamic drag” is often used to refer to the drag on watercraft that opposes the direction of motion. However, it generally refers to any situation where a body moves in a fluid and the resulting drag force opposes the direction of motion. More specifically, the hydrodynamic force depends in some way on the cross-sectional area of the body moving in the fluid, as outlined below. There are different types of drag that depend on the Reynolds number for the flowing fluid as well as the fluid properties and dimensions of the body.

There are two principle types of drag: friction (Stokes) drag and quadratic (hydrodynamic) drag. The former arises entirely due to the viscosity of the fluid in which an object moves, thus we call it a type of friction due to fluid flow along the surface of a moving body. Friction drag has a linear dependence on velocity as defined below:

The negative sign here simply indicates that drag always opposes the direction of the body’s motion. The proportionality constant implied in the above expression is also a function of the area along which the flow occurs.

Hydrodynamic drag, also called quadratic or pressure drag, has a quadratic dependence on the velocity of a moving body. Quadratic drag does not depend on the viscosity of the fluid; instead, it depends on the density of the fluid and the cross-sectional area of the body exposed to the flow. Different bodies will experience different levels of drag depending on their shape, which is quantified using a drag coefficient as described below. In general, quadratic drag can be defined as follows:

The above formula arises due to conservation of momentum and is derived by considering collisions between the moving body and the surrounding fluid. The effect of these collisions is to exert pressure on the moving body and thus act to slow down the body. Therefore, it is reasonable that hydrodynamic drag depends on the cross-sectional area of the body. We can see this more clearly in the definition of the drag coefficient.

To define the total hydrodynamic drag force acting on the body, we have to define a drag coefficient, which will account for variations in drag as a function of geometry and the Reynolds number. This is summarized in terms of an integral relation:

From this integral, we can determine the drag coefficient at a given velocity if the pressure acting on the object is known. The coefficient Cf is not always a constant; it may be a function of flow velocity (Reynolds number) and a function of space because the flow velocity varies across the body’s exposed cross section. The above equation does not preclude compressible fluids, so the density can also vary as a function of space and velocity. Finally, the drag force and the drag coefficient will be different depending on whether the flow across the body is laminar or turbulent.

A popular approximate model for the drag coefficient in laminar flow

In turbulent flow, the drag coefficient is more difficult to obtain along the surface of complex shapes. This is partially due to the inability to easily compute forces along arbitrary contours as well as flow behavior being highly sensitive to initial and boundary conditions in a system in the turbulent regime. A common model relating the drag coefficient to Reynolds number is Prandlt’s power law as defined below:

The above model is not universally applicable to every system. Aircraft or watercraft are two examples where the cross-sectional area of the system can be complicated, and determination of the hydrodynamic drag force will require a calculation of pressure across the front face of the body. If performed at multiple velocities and in transitional or turbulent flow, the drag coefficient vs. Reynolds number trend can be determined. This type of problem is intractable and requires CFD simulation to solve in a reasonable period of time.

The first place to start studying hydrodynamic drag acting on a complex body is to use a CFD simulation application. When you need to study these effects in complex systems, use the complete set of CFD simulation tools in Omnis from Cadence. Modern numerical approaches used in aerodynamics simulations, turbulent and laminar flow simulations, reduced fluid flow models, and much more can be implemented with these tools.