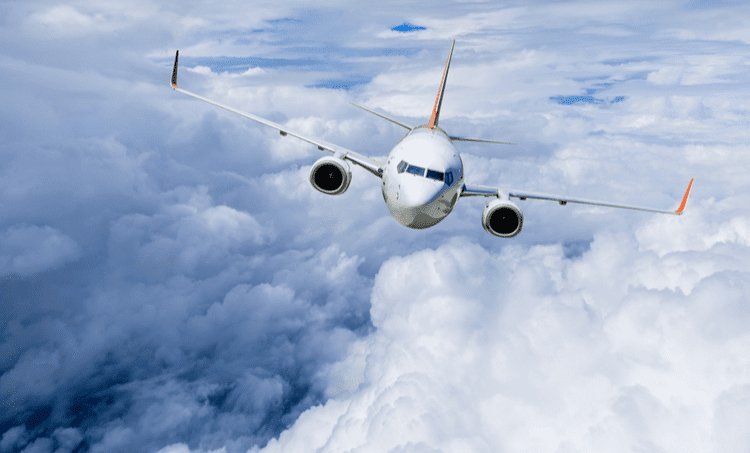 At some point, an airfoil’s angle of attack can become too large, leading to flow separation and stall. Aircraft designers who want to prevent stall and ensure a craft can achieve desired lift need to carefully design the shape and angle of attack of an airfoil. CFD simulations can help qualify a design and ensure it can access enough lift during flight while also preventing excessive drag and stall.

Effects of Airfoil Angle of Attack on Flight

The angle of attack of an airfoil can be visualized by looking at the airfoil’s cross section and the direction of oncoming wind during flight. The image below shows a free body diagram for an airfoil as viewed looking into the cross section.

Although only lift and drag are shown above, there are four forces acting on an aircraft during flight:

The direction of oncoming wind (airflow) is marked above to illustrate the definition of an airfoil’s angle of attack; as air flows over the airfoil, it should be clear that it will form streamlines across the top and bottom surfaces. The shape (radius of curvature) and velocity of these streamlines will determine the amount of lift acting on the airfoil, while the velocity and shape of the airfoil’s surface will determine drag acting on the aircraft.

Even if it is not obvious from the above discussion, it should be intuitive that the shape of an airfoil will determine both the angle of attack (due to the chord length orientation shown above) and the forces acting on the aircraft. Lift and drag exerted on the airfoil during flight can both be calculated in terms of two coefficients, namely the lift coefficient and skin friction coefficient, respectively.

Pressure gradient as a function of streamline radius of curvature. The lift coefficient for an airfoil can be calculated by integration as long as the velocity and pressure vs. streamline functions are known.

Pressure gradient as a function of streamline radius of curvature. The lift coefficient for an airfoil can be calculated by integration as long as the velocity and pressure vs. streamline functions are known.

Eventually, the velocity gets large enough that the Reynolds number for the flow corresponds to turbulent flow rather than laminar flow, and drag will begin increasing. At an excessive attack angle, flow separation occurs and the flow on the top surface of the wing becomes heavily turbulent, leading to a sudden loss of lift and resulting stall. Airfoil design requires considering the limits of attack angle for an airfoil so that the aircraft will not stall and fail during flight.

Airfoil design problems involve more than just calculating lift and drag given the airfoil’s angle of attack—they also require determining the transition to turbulent flow as the angle of attack increases. This involves the use of CFD simulation applications to predict the transition to turbulent flow from the Navier-Stokes equations or a reduced turbulence model. This transition can be determined by generating a lift coefficient vs. attack angle graph from multiple simulations, or by calculating turbulent flow above the airfoil directly at multiple attack angles.

Once the transition to turbulence is noticed, the wing could be redesigned to accommodate a larger attack angle or to reduce drag and change the aircraft’s performance while cruising. These important considerations in aircraft design and simulation will affect all other mechanical and structural aspects of an aircraft and will determine the overall efficiency and top speed of the aircraft during flight.

Advanced CFD simulation suites can be used to investigate the best airfoil angle of attack and shape to help maximize lift and minimize drag during flight. The complete set of fluid dynamics analysis and simulation tools in Omnis 3D Solver from Cadence are ideal for defining and running CFD simulations with modern numerical approaches, including aerodynamic lift explanations in complex aircraft.