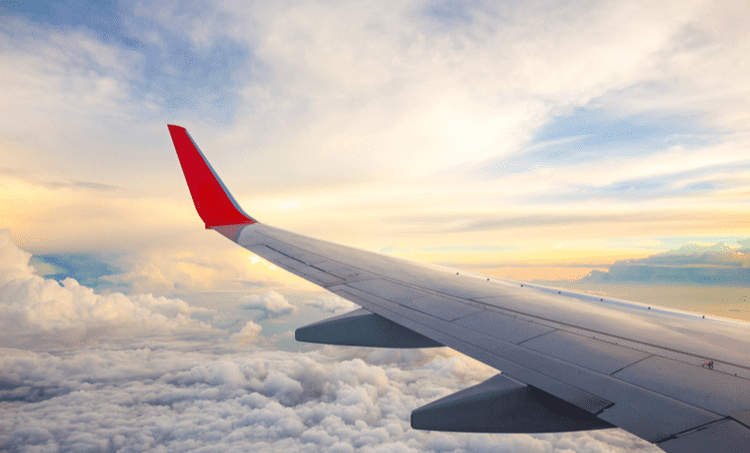 If you’re a student who is learning about fluid mechanics and aerodynamics, you intuitively know that aircraft wings are responsible for keeping a plane in the air. But how do they generate lift during flight? If you’re new to aerodynamics and you’ve never received a good introduction to the main aerodynamic forces, keep reading to see how an aircraft wing works. The principles are quite simple and, at a basic level, complex mathematics isn’t involved in explaining flight. Going further and understanding more complex behavior requires CFD simulations to calculate and visualize fluid flow in a complex system.

How an Aircraft Wing Works

All aircraft wings operate under some simple principles that involve fluid flow over the top and bottom surfaces. During flight, airflow over the wing of an aircraft will generate two of the four main aerodynamic forces. To get started, we need a simple free body diagram showing the forces acting on an airfoil. In the diagram below, two of the main aerodynamic forces are shown acting on an airfoil. Lift and drag are directly related to the attack angle (orientation of the airfoil), the shape of the airfoil, and the flow rate of air across the airfoil. 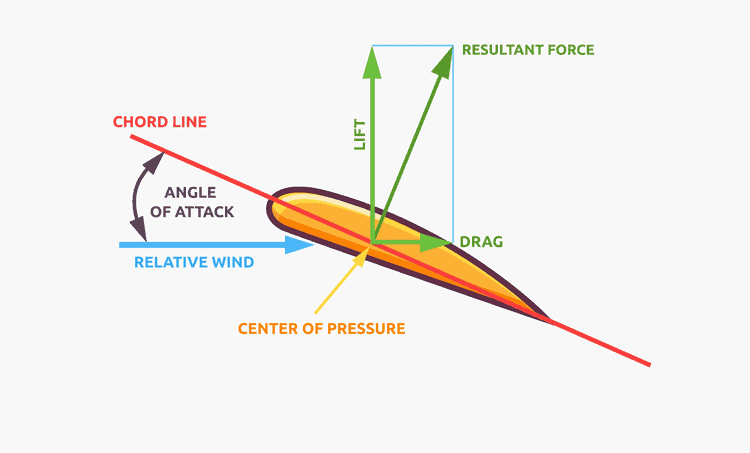 In total, there are four main aerodynamic forces acting on an aircraft during flight. These are:

Now that the four forces are defined, we have to understand two of them in terms of fluid flow: lift and drag. These two forces relate to the relative velocity of the surrounding air across the wing. As air flows over the airfoil, its flow rate and flow density will determine the main forces acting on the craft.

The force acting to slow down an aircraft is drag, which arises in two forms: pressure drag and skin friction drag. Pressure drag is based on the shape of the aircraft and is related to the speed at which the aircraft collides with oncoming air, which creates a high pressure region at the front of the aircraft. This acts to counteract thrust, and it is reduced by enforcing a low-profile design on the body of the aircraft.

The more prominent form of drag acting on an aircraft wing is skin-friction drag. This force exists due to the formation of a boundary layer on the top and bottom surfaces of the craft. Ideally, we would prefer the fluid flow in the boundary layer to always be laminar. However, as the aircraft’s speed increases, fluid flow in the boundary layer will become turbulent, forming vortexes along the back edge of the airfoil. Depending on the attack angle and the air speed, the formation of turbulent flow will create excessive drag that greatly impedes thrust and lift.

Fluid flow across an airfoil will generate lift because the flow rates are different on the top and bottom sides of the wing. The slower wind speed along the bottom of the wing creates a high pressure region below the wing. This generates a vertical net force due to the pressure gradient through the wing’s cross section. This is visualized below for a simple airfoil. 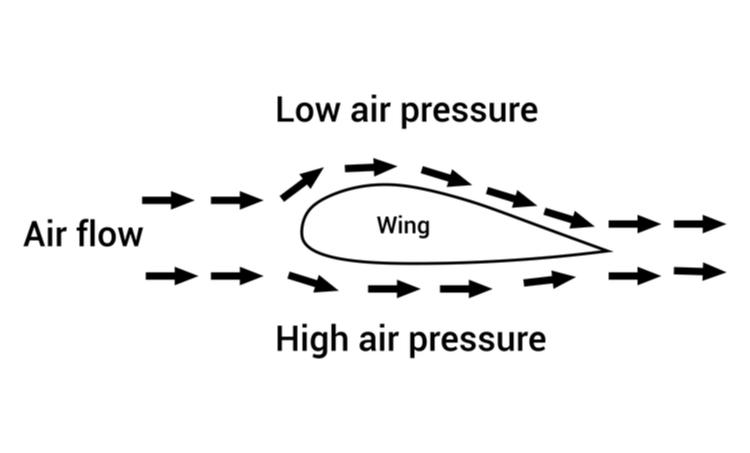 Air pressure differences across the body of an airfoil produce lift.

Simulations Are Needed in Airfoil Design

Airfoils can have various sizes, cross-sectional shapes, and orientations that will create different amounts of lift and drag. In addition, the attack angle will determine the amount of lift as well as the maximum rate at which an aircraft can climb before stall occurs. Because there are so many parameters involved in aircraft wing design, and because the governing equations can be quite complex, CFD simulations are normally used to simulate airflow and lift acting on an aircraft. This is an important part of aircraft design and it requires the right simulation software to implement modern numerical techniques to solve the main equations in fluid dynamics.

Whether you’re just learning how an aircraft wing works or you’re designing advanced aeronautical systems, you can simulate flow behavior and the resultant aerodynamics forces using the complete set of CFD simulations from Cadence. The meshing tools Pointwise help you generate numerical meshes from your physical design data, and the Omnis 3D Solver simulation application implements modern numerical approaches to determine flow behavior in your system. These two applications give systems designers everything they need to build and run CFD simulations.