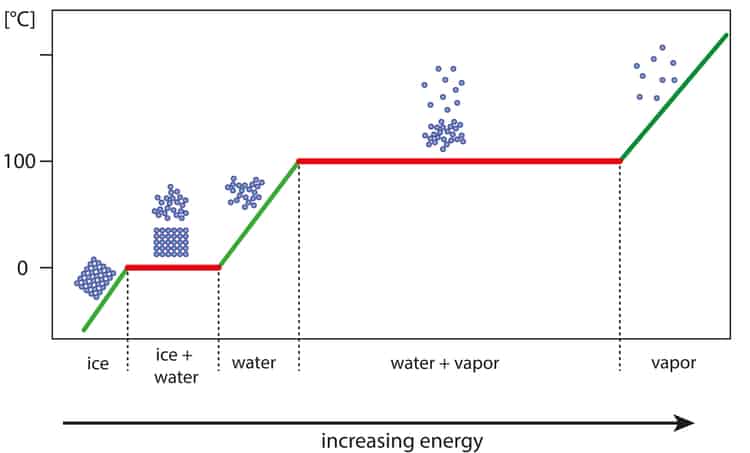 Phase change materials (PCMs) are an integral part of thermal energy, heat pumps, solar power, and conditioning systems where the phase transition influences heating and cooling applications. Phase transitions deal with the change in the state of a medium, i.e., when a liquid changes to a solid (or vice-versa) at a specific temperature. The energy associated with the phase change of such PCMs is a critical aspect of system analysis and design.

The heat of fusion follows a similar principle, whereby the energy associated with the phase transition is calculated in a system. Heat of fusion analysis with computational fluid dynamics (CFD) can further explain the solidification and melting phenomenon using numerical analysis and simulation to describe the thermal properties of a system. In this article, we will briefly discuss the heat of fusion and its application in thermodynamic system design.

The Heat of Fusion

In a thermodynamical system, the heat of fusion indicates the amount of energy required to change the state of matter, i.e., from solid to liquid or from liquid to solid. The heat of fusion is also known as latent heat of fusion or enthalpy of fusion. The energy used is “latent heat” because the phase transition occurs at a specified temperature without changing. The most common example for this is the melting of ice to water. When the ice reaches its melting point, no further temperature change is required for the additional ice to melt.

The heat required for the phase transition to occur depends on the type and amount of medium being melted. This can be expressed in mathematical terms as:

Hf is the enthalpy of fusion

q is the amount of heat that is absorbed or released

The formula for heat of fusion can be expressed as:

Because the temperature is constant, the entropy change is equal to the difference between the entropy of the two phases:

Predicting Solubility With the Heat of Fusion

For an ideal solution, the energy absorbed or released during the phase transition can be considered equal when at equilibrium:

The same equation can be written as the following, given that R is the gas constant and the temperature is T:

However, we know that at chemical equilibrium, Gibbs free energy is:

Correlating this with the above energy equation for phase transition, we get:

This equation indicates that the heat of fusion is equal to the difference of the energy absorbed/released between pure liquid and pure solid. Since,

We can apply the Gibbs-Helmholtz equation to get:

Finally, we can solve for solubility as:

When PCMs are used in a thermodynamic system, CFD can be an important tool to solve the governing equations and simulate their behavior. Through numerical methods, commercial CFD packages can facilitate the calculation of the pressure, volume, temperature, and velocity associated with the material. With enthalpy modeling, heat transfer analysis can be made for complex systems. By using tools, such as Omnis from Cadence, high-fidelity simulations can be achieved for all types of phase transition operations.