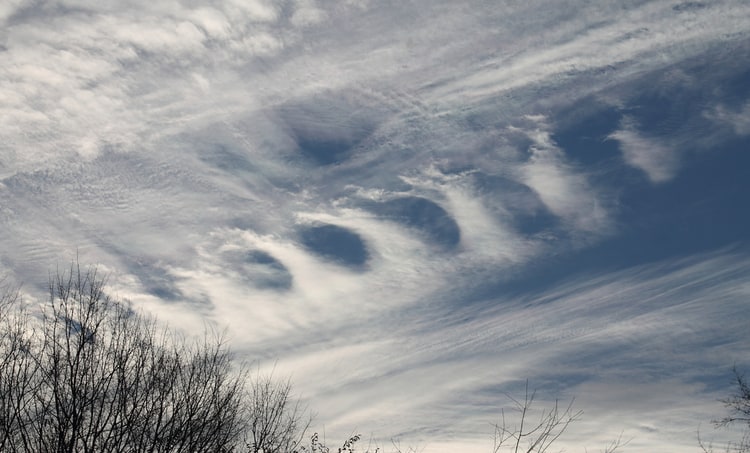 Kelvin-Helmholtz instability is commonly observed in the atmosphere

It is well known that real fluid flow problems involve turbulent flow, where fluid flow instabilities may create excess drag, pressure, or mixing where it might not be desired. In some cases, mixing is desired, and designers intentionally build systems that will encourage mixing at lower velocities (Reynolds numbers). In some flows, an interesting turbulent phenomenon may occur, known as the Kelvin-Helmholtz instability. This flow behavior refers to a mixing tendency between two layers of fluid or between two different fluids.

The resulting flow pattern is quite fascinating, and this phenomenon is known to appear in nature, as is the case with many interesting physical phenomena. Although the Kelvin-Helmholtz instability is typically observed in atmospheric phenomena, it is also observed in flows of magnetized plasmas. In this article, we will discuss the Kelvin-Helmholtz instability and the interesting mathematics behind this flow phenomenon.

Where the Kelvin-Helmholtz Instability Occurs

Particular types of flows have the capability to exhibit the type of mixing and rolling motion embodied in the Kelvin-Helmholtz instability. The two major types of flows include:

The Kelvin-Helmholtz instability produces rolling or vortical motion between the two fluids, as shown in the image below. In this image, the density gradient is nearly vertical (pointing downwards), and there may be some shear force that exists between the two regions of the fluid. The resulting wave motion, or rolling motion, is often observed with a repeated pattern, as can be seen in the cloud cover in the image below. 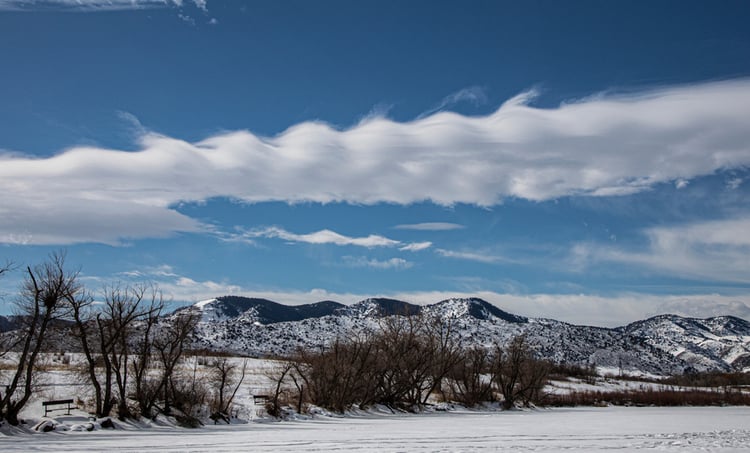 Kelvin-Helmholtz instability gives rise to wave-like vortical motion, as shown in this image. The motion is seen in the cloud layer due to density/velocity differences above and below the cloud layer.

Onset of the Kelvin-Helmholtz Instability

What drives this kind of instability and the resulting flow behavior? The transition from laminar to turbulent flow is driven in part by shear that drives vortical flow. The cause of a transition to turbulence in a free-stream, one-dimensional flow is still a subject of study and debate, although it is clear that some stochastic behavior with high sensitivity to initial/boundary conditions is related to the onset of turbulent flow. In the type of turbulent flow exhibited in the Kelvin-Helmholtz instability, the onset of turbulence is also driven by some random perturbation while being moderated by viscosity/surface tension.

Just as an example, consider the flow of two incompressible inviscid fluids in parallel (horizontal direction). For the moment, assume the fluids are immiscible, although a similar argument applies to miscible fluids. The fluid parameters and random perturbations drive the formation of an interface between the two fluid regions, as shown in red below. 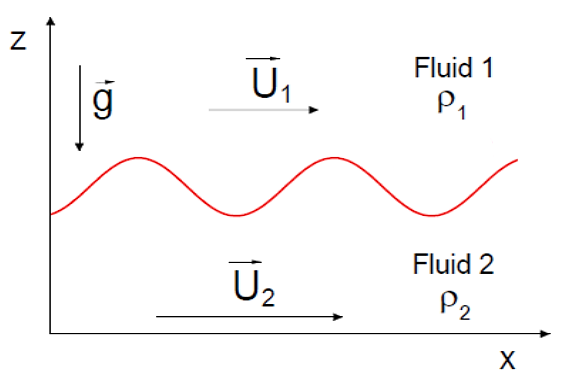 If the viscous force between two air masses, which move at different speeds, is too small to dampen any vortical motion development, then the Kelvin-Helmholtz instability can develop. The length scale of the wave/rolling motion depends on the differences between the density and velocity in the two fluid regions. The direction (clockwise or counterclockwise) of the resulting vortical flow between these regions also depends on the densities and velocities involved.

The velocity potential in each region is defined by imposing unsteady flow into Bernoulli’s equation, as defined below: 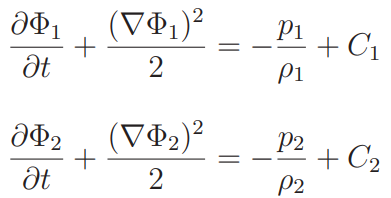 Given initial and boundary conditions, we have a clear coupled nonlinear stability problem, which one would expect to produce the type of cycling behavior seen in the Kelvin-Helmholtz instability. The growth or decay of the instability can be predicted by determining the eigenvalues of the differential operator defining this set of coupled equations, which will depend on the velocity and density in each region.

While some constitutive results regarding the growth or decay rate of the Kelvin-Helmholtz instability can be gained analytically, the onset of the instability in more complex systems or flows is best studied in CFD simulations. In particular, the interaction between this flow behavior and other bodies near the flow requires CFD simulations due to the geometric complexities in these problems. These situations often involve other factors, such as heating and convective flows that also drive the onset of the instability, and these are best included in a commercial CFD application.

Whenever you want to study the Kelvin-Helmholtz instability or other interesting fluid flow phenomenon, use the complete set of CFD simulation tools in Omnis from Cadence. Modern numerical approaches used in aerodynamics simulations, turbulent and laminar flow simulations, reduced fluid flow models, and much more can be implemented with these tools.