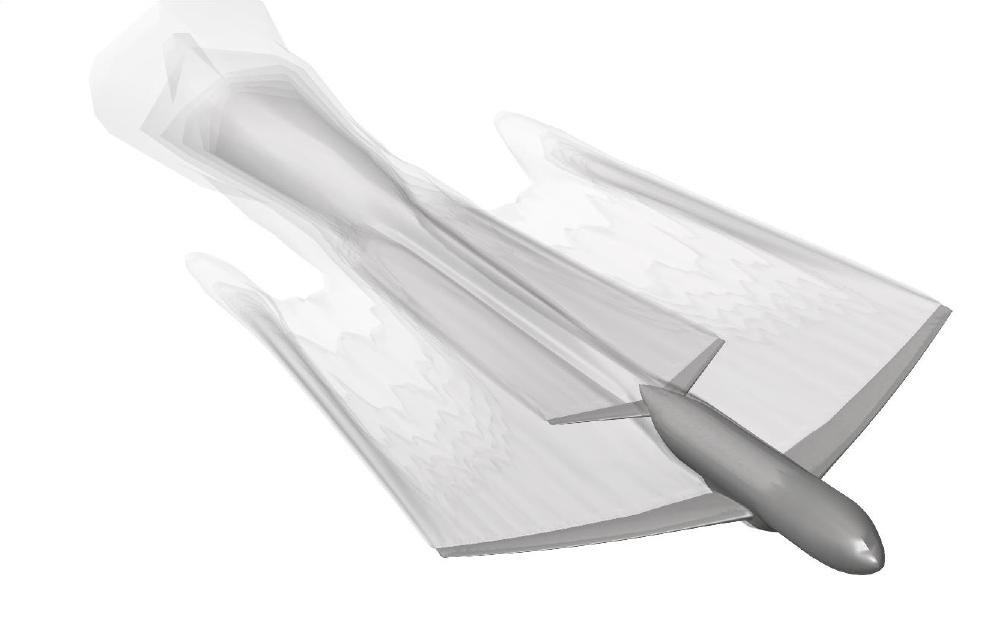 Whether you’re designing a commercial airplane or a fighter jet, fluid dynamics will govern how a craft can move and maneuver. This important area of continuum mechanics accounts for the macroscopic behavior of fluids and focuses exclusively on fluid flow in complex systems, different flow regimes, and various material properties. This rich area of physics and engineering has seen major advances over the past century, and many complex systems can now be designed and analyzed with the aid of powerful CFD simulation applications.

As a rigorous area of scientific study, aerodynamics focuses on understanding the behavior of fluids when disturbed by a solid body, such as a wing or rotor. As an engineering discipline, airplane aerodynamics is a generalized area of CFD that focuses on predicting and analyzing the flight dynamics of aircraft. The goal in using CFD simulations is to simulate the forces acting on an airplane during flight, which then governs and limits how a craft can safely maneuver during flight. In this article, we’ll look at some of the high-level areas where CFD simulations are used in airplane aerodynamics, including the prediction of aircraft forces and flight behavior.

Here, airflow plays a dual role of enabling lift and producing drag on the craft, both of which depend on the flow behavior (laminar, turbulent, or transition regions) and the material properties of the fluid. Environmental factors (temperature, pressure, weather conditions) also play a role in determining lift and drag, as they can influence the material parameters of the surrounding air as well as how the surrounding air might enter turbulent flow during flight.

The orientation of an aircraft along its three principal axes is described using three angles, called roll, yaw, and pitch. These are displayed below: 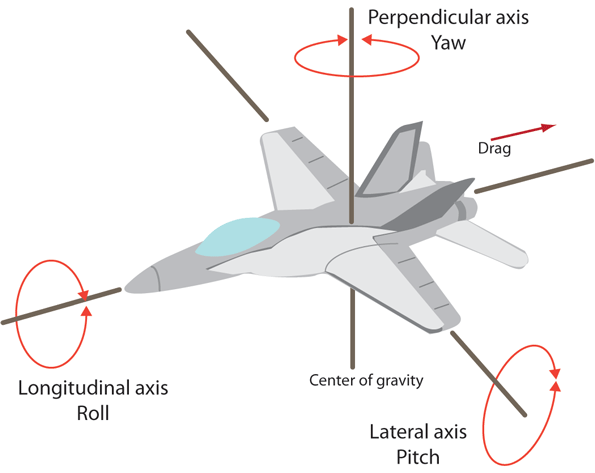 In the list of forces above, we haven’t considered how to intentionally apply torque on an aircraft to induce, prevent, or correct roll. The four aerodynamic forces can also produce rotational motion about an aircraft’s three principal axes if there is a mismatched pressure gradient across the wings or body of the aircraft. This is important in aileron designs, as these modify the lift and drag on the aircraft, which can create or compensate for yaw, roll, or pitch.

The final parameter that influences the orientation of an aircraft is its angle of attack. This particular angle defines the orientation of an aircraft’s wings relative to the oncoming air. This is sometimes confused with pitch, but they are not the same thing; the angle of attack is defined for the wing with respect to oncoming air, while the pitch angle is relative to the plane’s longitudinal principal axis.

The angle of attack will determine how much lift is generated on the wings. As fluid flows over the wing, a pressure gradient between the wing’s top and bottom surfaces is created. This pressure difference acting on the surfaces of the wing will produce a net upward force if the angle of attack is high enough (usually about 5°). 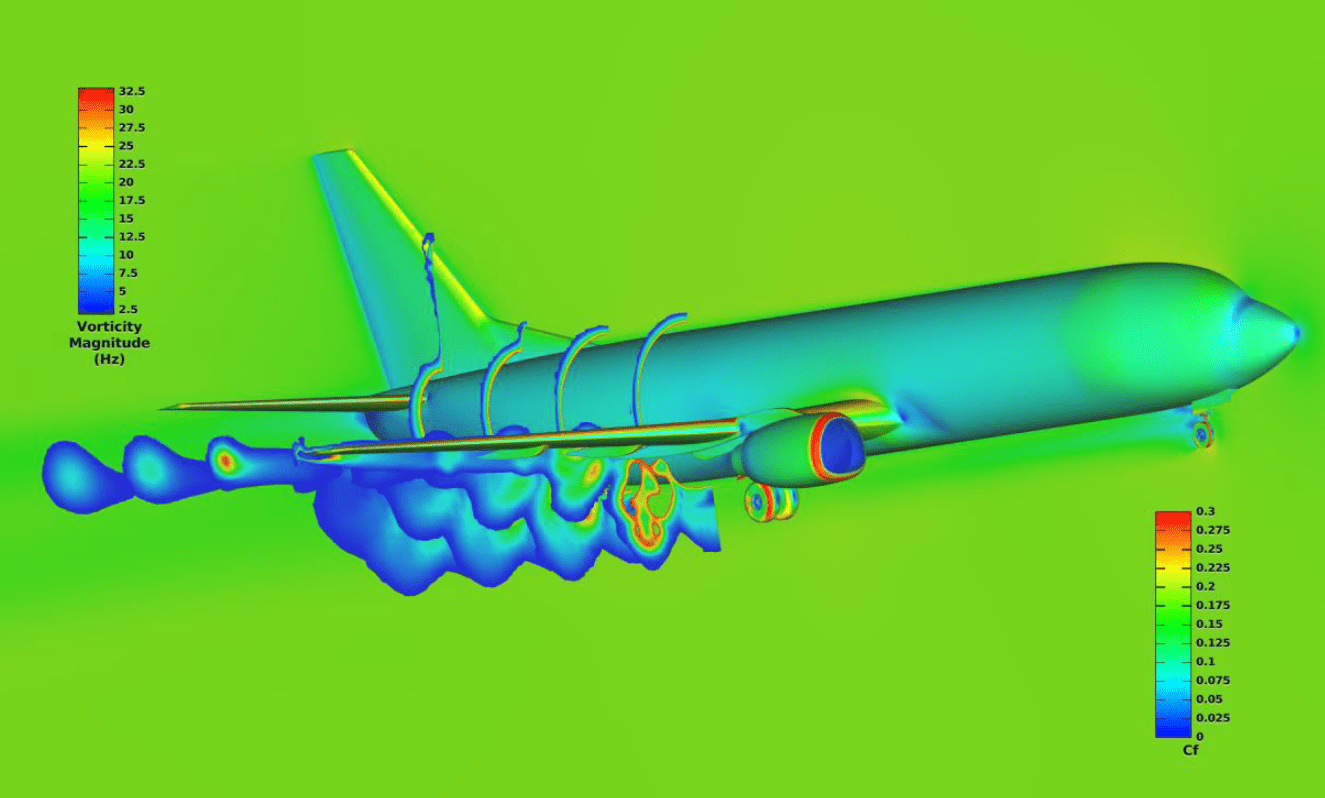 This simulation result shows slow-moving air beneath the wing of an aircraft, which creates a vertical lift force on the aircraft

If the aircraft pitch is too high such that the aircraft’s angle of attack is also large, airflow across the wing can experience flow separation, producing turbulent flow along the back side of the wing. This creates a condition called stall, where lift on the aircraft wing suddenly decreases. This transition between flow regimes during flight effectively limits how the aircraft can maneuver at different speeds.

Because fluid flow is so critical to the ability of an airplane to maintain altitude and maneuver during flights, aircraft systems designers need computational tools that can help them accurately model fluid flow across the aircraft.

The Role of Simulations in Airplane Aerodynamics

Fluid dynamics simulations, or more specifically CFD simulations, are used in a broad range of systems, but they are the cornerstone of aircraft aerodynamics simulations. Aerodynamics CFD simulations focus on determining the flow regime for fluid across an aircraft as well as the pressure gradient produced by the flow in various operating conditions. With these parameters, wing and body designs can be qualified, and the maneuverability limits of an aircraft can be determined.

Systems engineers that need to understand the influence of aerodynamic forces on their designs should use the complete set of CFD simulation software from Cadence. The mesh generation tools in Pointwise can help designers create accurate simulation grids with high mesh order in complex geometries, such as unique wing designs in airplane aerodynamics. Once a mesh is created and ready for further analysis, the set of CFD simulation tools in Omnis 3D Solver can determine the flow solution in your system accurately and efficiently.