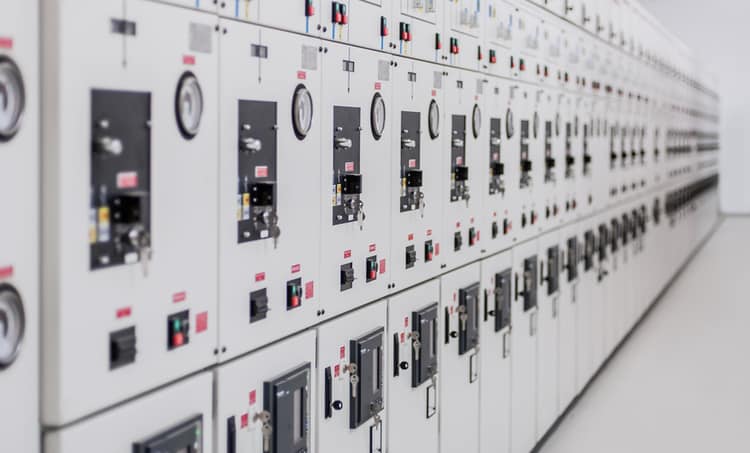 As much as we would like the AC waveform that comes from a wall outlet to be a perfect 50 Hz/60 Hz sine wave, this doesn’t happen in reality. Real power systems, particularly in North America, are known to occasionally deliver “dirty” power, where additional noise is present in the AC signal that comes from the wall. Industry standards in North America, Europe, and elsewhere place limits on noise content in power systems with the goal of ensuring any device that plugs into a wall outlet can function properly.

Like other noise sources, the extracted noise from an input AC waveform in a power system might appear to be random, but it actually has a well-defined power spectrum that is made up of its harmonic content. Harmonics in electrical power systems are, in some ways, more difficult to address than random noise. This is partly because of the way power converters operate and due to the essential need for nonlinear components in power conversion systems. In this article, we’ll look at how these effects generate harmonics in electrical power systems and how harmonic content can be reduced.

Point #3 is the reason the industry has developed standards limiting harmonic content returned to the grid from the point of common coupling (PCC) in some other grid-connected facility. The IEC 61000-3-2, IEC 61000-3-12, and IEEE STD 519-1992 define harmonic current emission limits using total harmonic distortion measured at the PCC as an evaluation metric.

The presence of harmonics can be observed in the time domain or the frequency domain, using an oscilloscope or spectrum analyzer, respectively. An example time-domain waveform for a 50 Hz AC input for a power converter is shown below. 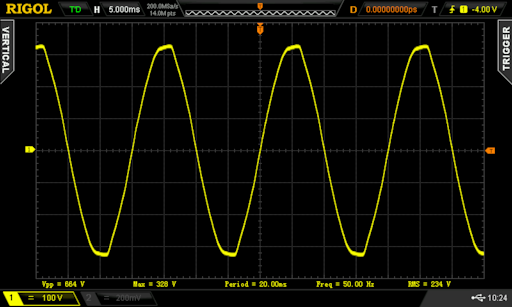 The shape of this 50 Hz AC waveform is clearly not truly sinusoidal, so it will contain some harmonic content

Typically, all of the above effects will be present in a power conversion system. Consider a high current switching regulator with an AC input as an example. The AC input will have the desired fundamental frequency plus some harmonic content. During AC-DC conversion (through bridge rectification) and later DC-DC conversion (through switching regulation), the input AC waveform will interact with diodes, and the nonlinear impedance of a semiconductor diode will generate harmonics of the input AC waveform.

The switching action in a switching regulator forces current to pass through a power MOSFET to generate a DC output. As a result, the DC output will have some harmonics superimposed on the DC output due to the frequency content in a square wave (in the PWM signal). The MOSFET itself can also generate harmonics when operated near saturation, something that is definitely problematic in power amplifiers. In other words, the switching stage in a DC-DC converter generates its own set of harmonics, which propagate to the DC output.

What to Do About Harmonics in Electrical Power Systems

While you can never completely remove harmonics from electrical power systems, they can be minimized with these design approaches:

In general, there is no single strategy that will solve all problems with harmonics in power systems. The key for power systems engineers is to judiciously implement the harmonics suppression techniques that are objectively best for their designs. For high current systems, the general approach is to use nearly all of the above measures to reduce or eliminate harmonics in electrical power systems. When adding elements like more efficient MOSFETs or common-mode filters, SPICE simulations will be the starting point for evaluating noise reduction in a design.

Cadence’s Allegro PSpice Simulator application is among the industry’s best PCB design and analysis software for circuit design and simulation. Harmonics in electrical power systems due to nonlinearities, switching, rectification, and any other effects can be easily identified in the time and frequency domains with this simulator. Cadence’s software suite can also be used to perform a range of power and signal integrity simulations and evaluate your system’s functionality before you start your physical layout.