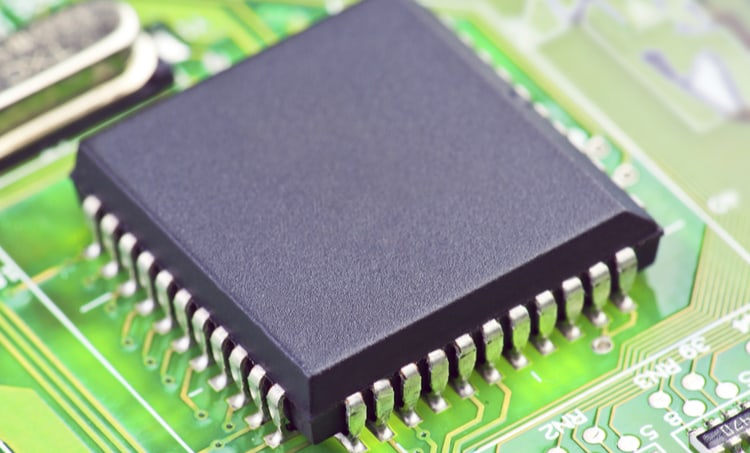 Electromigration is a problem that can occur in any IC, including this component

Electromigration is a failure mechanism that needs to be considered in VLSI physical design. Inside an integrated circuit, atoms in traces that make up interconnects can experience diffusion, where they are transported along the direction of the voltage drop and settle into hillocks on the edge of the conductor. Eventually, the interconnect fails when an open circuit forms, leaving the IC useless and forcing replacement.

Although electromigration is unavoidable, the mean time to failure (MTTF) in a device can be increased to long lifetimes with some simple design choices. The design aspects are both physical and electrical, with the ultimate goal of reducing temperature and ensuring long lifetime for an interconnect.

If you’re looking for guidance on how to design IC interconnects to have long lifetime and high reliability, keep reading to learn more about electromigration in VLSI physical design.

An Overview of Electromigration

Example failure in an interconnect due to electromigration. [Source]

Electromigration in an integrated circuit is a runaway process that eventually leaves behind an open circuit in an interconnect. This process is driven by the current density and temperature of the conductor that makes up an interconnect. One important aspect of reliability engineering as part of VLSI layout is to maximize MTTF by trying to minimize current density, minimize temperature, or both. The goal in this type of engineering is to minimize the diffusion rate.

All of these processes have some common characteristics:

The main equation used to describe the effects of electromigration in VLSI physical design is Black’s equation. This equation relates the MTTF value to the current density using an Ahrennius function:

In the above equation we have the following definitions:

This equation is empirical, although versions can be derived from thermodynamics by considering individual diffusion processes. The primary conclusion that is reached from this equation is that an interconnect with a larger cross-sectional area and shorter length will have a longer MTTF. This is normally the starting point for considering how to maximize the lifetime of an interconnect. However, other design choices will help minimize the temperature of the interconnect, which will then help maximize MTTF.

In addition to opting for wider and shorter interconnects, one task in interconnect design is to adjust the switching frequency and rise time to reduce the average current density in the interconnect, which then reduces the total heat dissipation during operation. Between the signal rise time, switching frequency, temperature, geometry, and current amplitude, there are many variables to consider in VLSI design. Trying to balance all of these factors to minimize electromigration is a complex physical layout problem in VLSI. The right circuit design and physical layout software can help you analyze a complex reliability problem like electromigration in VLSI physical design.