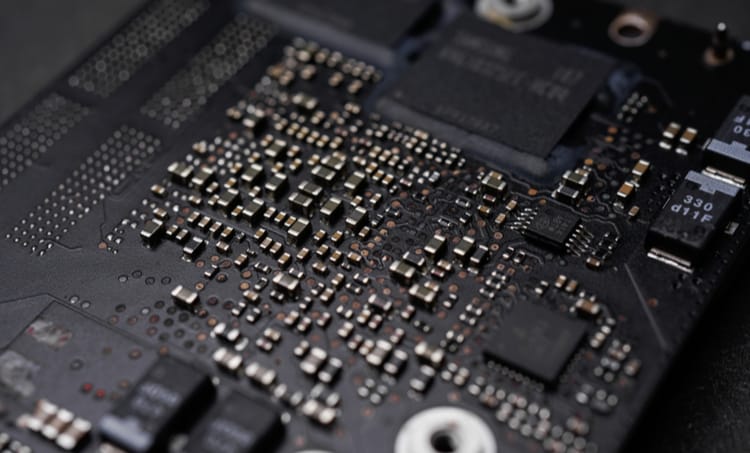 Any PCB will have a complex geometry due to the arrangement of components, traces, vias, pads, planes, and much more. The PDN in a PCB can be quite complex due to the use of multiple plane layers, power rails, vias leading to components, and decoupling capacitors used throughout. Each of these elements contributes some PDN loop inductance to the total impedance of the structure, and it’s important to see how inductance plays a role in determining total impedance as part of power integrity design.

Unfortunately, there is no single formula for determining PDN loop inductance or impedance. Instead of using simple formulas to determine the inductance and impedance in a PDN, measurements and field solvers can be used to determine these values and better understand transient behavior on the PDN. Once these are determined, designers can take a transfer function approach to understand the PDN impedance and predict how different components will create ripple noise 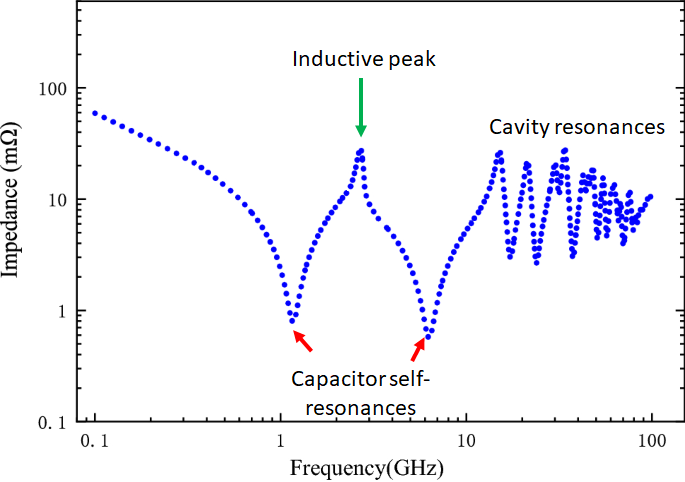 If you look at the structure of a PDN in a high-speed PCB, the typical structure consists of adjacent power and ground planes that act like a very large capacitor. The capacitance of adjacent planes and decoupling capacitors on the board collectively act like a large charge reservoir, which can supply charge to digital components during switching events. Unfortunately, this ignores several sources of inductance in the PDN structure, which will produce the resonances shown in the above impedance spectrum:

In engineering the impedance of a PDN, the goal is not to calculate individual inductances and try to reach certain design values. Instead, the goal is to determine where to add decoupling capacitors that can target specific peaks in the impedance spectrum, thus keeping overall impedance low. By keeping the PDN impedance low, the ripple voltage on the power bus can be kept within acceptable limits.

In addition, there is the need to quantify impedance and predict how it will affect the transient ripple response seen on the power bus. This can be done with standard PDN impedance measurements and an impulse response calculation.

The structure of a PDN is effectively a set of non-ideal capacitors in parallel, which are connected by parasitic inductances, as shown in the circuit diagram below. The impedance of this phenomenological model is not calculated. Instead, it can be measured on a test board with a TDR measurement, impulse response measurement, or a network analyzer (Z-parameters or S-parameters).

Predicting Transients on the PDN

Once the PDN impedance is known, the impulse response on the PDN can be calculated using the convolution theorem. All that is needed is the PDN impedance spectrum function and the time-domain waveform for the input transient current drawn into the PDN (typically modeled as a square wave). This is defined with the following Fourier transform and convolution integral:

Impulse response calculation for ripple voltage measured on the PDN during switching events. Note that ‘*’ is the convolution operation

There is no formula for determining total PDN loop inductance, and you can’t simply model the PDN as having a single equivalent loop inductance. For this reason, SPICE simulations also cannot be used to calculate PDN impedances directly from the structure of the PDN and PCB layout; the geometry of the system is just too complex. The complex structure of a PDN creates a very high order filter that cannot be reduced beyond a large RLC circuit with multiple poles and zeros. Although impedance is the important factor that determines power bus ripple on a PDN, looking at the impedance as something to calculate directly is the wrong approach to power integrity design.

Instead, you can calculate the electromagnetic field, potentials, and current directly from Maxwell’s equations, and you can use Ohm’s law to calculate the PDN impedance. To get the impedance spectrum, this is done with a finite-difference frequency domain (FDFD) numerical scheme, and using Ohm’s law with the calculated electric potential and current gives the PDN impedance. Advanced PCB layout tools will include a powerful 3D electromagnetic field solver that can be used for these calculations, as well as other important analysis tasks in your electrical system.

Whether you need to determine the PDN loop inductance of specific traces in your system or perform important signal integrity simulations, use Cadence’s PCB design and analysis software. Only Cadence provides the industry’s best CAD utilities for PCB design and power integrity analysis that help automate many important tasks in systems analysis. Cadence’s suite of pre-layout and post-layout simulation features gives you everything you need to evaluate your system.