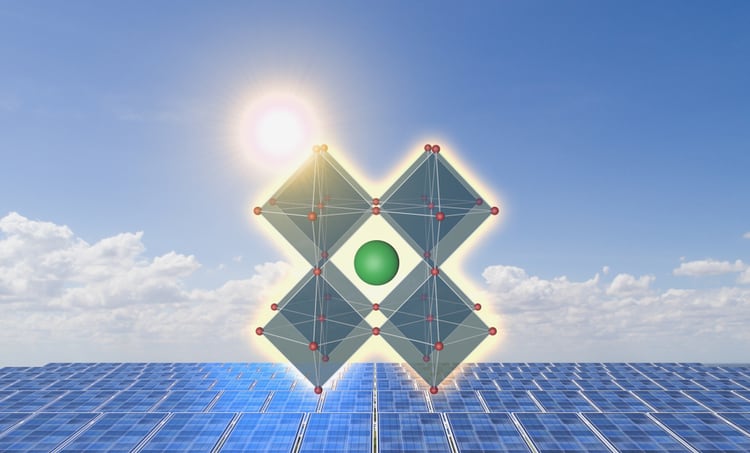 Although the prefix “ferro” refers to iron, it’s used to describe certain electrical effects in materials that do not contain iron. Ferroelectric materials exhibit spontaneous polarization and are an electrical analogue of ferromagnetic materials. Solar cells can take advantage of spontaneous polarization effects to produce favorable charge carrier dynamics in thin films, but thin-film solar cell fabrication has remained challenging over the past few decades.

As hybrid semiconductor materials, ferroelectric perovskites provide numerous advantages over other materials for thin-film solar cells, with high absorption and power conversion efficiency that is competitive with the best silicon devices. Although these materials are rather exotic for most designers, integration into conventional power management systems is straightforward and will be necessary to drive broad commercialization of perovskite solar cells. There are other areas where device designers and systems designers can incorporate non-ferroelectric and ferroelectric perovskites in unique ways.

The Advantages of Ferroelectric Perovskites

Perovskites are optoelectronic materials with tunable properties, making them very useful for optoelectronic applications where silicon is unsuitable. A great example is light emitting diodes, where building a silicon LED with any appreciable efficiency is challenging due to the indirect optical bandgap in silicon. The spectral responsivity can be tuned across the visible range and into infrared wavelengths, and tuning will also influence the carrier dynamics. Both parameters are critical for solar cells, where the carrier dynamics and responsivity combine to determine the power output from a solar cell.

The typical structure of a perovskite optoelectronic device is shown in the stacked structure below. In photodetectors and solar cells, the perovskite is engineered to act as an absorber by tuning its chemical structure, and the surrounding layers are used as buffer/transport layers for excited carriers.

Ferroelectric materials are already widely used in thin-film piezoelectric sensors, accelerometers, capacitors, and other commercially available electronics. Their broader use in optoelectronics has remained a contemporary research topic, and the use of perovskites in commercially available solar cells is being investigated by some larger companies. There are a few reasons ferroelectric perovskites are receiving such focus.

The Advantages of Ferroelectrics in Optoelectronics

The role of ferroelectricity in optoelectronic devices, and particularly in solar cells and photodetectors, relates to the built-in electric field generated in a heterojunction device. Due to the naturally-occurring remnant charge density in the ferroelectric perovskite, the heterojunction structure behaves like a pn junction, exhibiting band bending and rectifying transfer curve behavior. The relationship between band structure, optical excitation, and current modulation was investigated in a recent review, and the effects of the built-in potential in the heterojunction device are shown below. 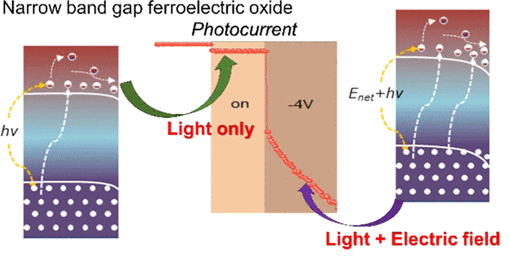 From the charge carrier’s perspective, the absorbed photon provides energy to an electron, and the remnant polarization in the perovskite provides some additional potential energy, driving current into charge transport layers. Taken together, there is greater photocurrent in devices that use these perovskite absorber materials, thanks to the higher built-in voltage.

The first observation of ferroelectricity in an yttrium barium cuprate ceramic when it was not in the superconducting state. Since then, other ceramics with metal cations were found to exhibit ferroelectricity, sometimes called polar metals. In particular, titanate ceramics have received significant focus, as they occur naturally as perovskite minerals.

The most recent development is in metal-free perovskites, where all components in the perovskite chemical structure are free of metal atoms. Barium titanate (BaTiO3) is often cited as a benchmark, as it provides among the highest charge densities of ceramic ferroelectric perovskites. The move to metal-free perovskites is beneficial, as the design strategy is straightforward and synthesis can be executed in solution. This new class of perovskites may be more easily integrated into areas outside of solar cells, such as flexible electronics and printable electronics.

If you’re working with ferroelectric perovskites in solar cells or other devices, you’ll need PCB design and analysis software to help integrate perovskite devices into your system. Cadence provides powerful software that helps automate many important tasks in systems analysis, including a suite of pre-layout and post-layout simulation features to evaluate your system.