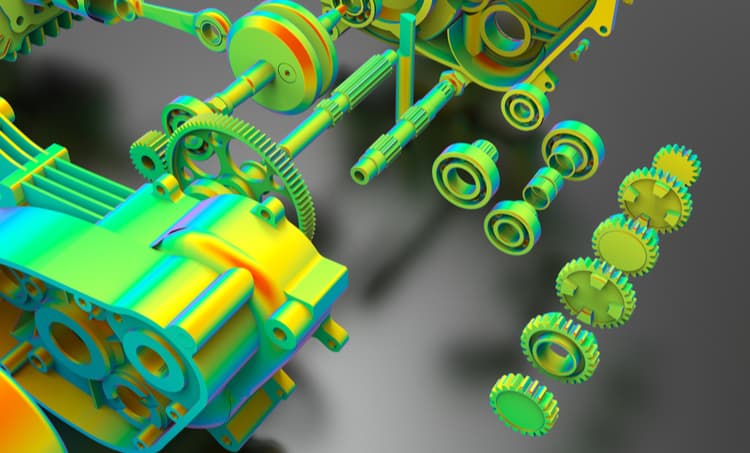 Electromagnetics, CFD, mechanics, and thermal problems can all be solved using numerical techniques with field solver applications. These software applications originally grew out of academic research and are now commonplace in many engineering organizations. To solve these problems, a numerical discretization scheme and solution scheme must be selected. Field solvers can perform a standard set of numerical procedures, and it’s a designer’s job to understand when different schemes are applicable and how they generate numerical solutions.

The choice of which numerical scheme and discretization scheme to use depends less on the geometry of the system and more on the information you want to gather about the system. Three of the standard numerical schemes in electromagnetics problems are finite-difference time-domain (FDTD), finite element method (FEM), and method of moments (MoM). If you’ve never worked with all of these, keep reading to learn the difference between FDTD vs. FEM vs. MoM.

If you can answer these questions, you can make a clearer decision as to which method to use to solve your specific problem.

The Differences Between FDTD vs. FEM vs. MoM

FDTD is a very common method for computational solving electromagnetics problems that have some time dependence. This method is used to solve general problems where a system is driven with an arbitrary sourcing function in time. The time dependence can appear in two ways (often simultaneously):

Just like any other partial differential equation, the system’s initial conditions and boundary conditions must be specified.

FEM is useful in systems when there is no time dependence (steady-state) or purely harmonic time dependence in a linear medium so that there is only a single frequency to consider. Nonlinear problems can be examined using FEM as long as the time variable can be separated from the equations as follows:

In time-variant systems, FDTD should be used instead of FEM. The main challenge in FEM is to derive a numerically stable set of equations to be solved when eliminating the time derivative. In other words, the transient behavior must be shown to converge to a steady state, which can be derived using any of the methods in stability analysis (Poincaire-Bendixson theorem, eigenvalue analysis, etc.). As long as the equations to be solved can be demonstrated to be stable, then FEM can be used to determine a convergent solution in space.

The MoM should not be confused with the statistical method of the same name. This numerical solution scheme forms a discretized mesh for the solution along the boundary of the solution domain and is used to solve for the current density (J) and the charge (Q, or charge density ⍴) using an iterative matrix formulation. Because a matrix formulation is used to solve for these quantities, the computational time involved in these problems grows as a power of the dimensionality, i.e., of order O(LMNM), where L is a length scale, M is the number of spatial dimensions, and N is the number of mesh points. In addition, increasing the mesh density does not guarantee more accurate convergence. In some cases, low-density meshes are more accurate than high-density meshes.

Using a matrix formulation has its advantages; important results like network parameter matrices can be immediately determined along the boundary (ports) in the system. This is why PCB design applications will use MoM in their graphical impedance visualizers. An example for DDR4 lines in a high speed layout is shown below.

Each Method Has Its Advantages

There are several important points to note about each of these techniques, and many designers simply default to their preferred method without considering the advantages of an alternative method. The table below shows a summary of the ideal situations in which to use FDTD vs. FEM vs. MoM:

Fusion of these standard numerical techniques with coupled nonlinear equations describing dispersion, material properties, and even semiclassical effects is a contemporary research topic. In addition, there are other numerical methods besides FDTD, FEM, and MoM used to discretize complex geometries and solve systems of differential equations, including in electromagnetics problems. Some examples include topics in lasers, nonlinear optics, wideband signaling in nonlinearly dispersive media, and time-variant systems. Today’s field solver applications can be used to select from a range of possible solution methods for computational electromagnetics problems.