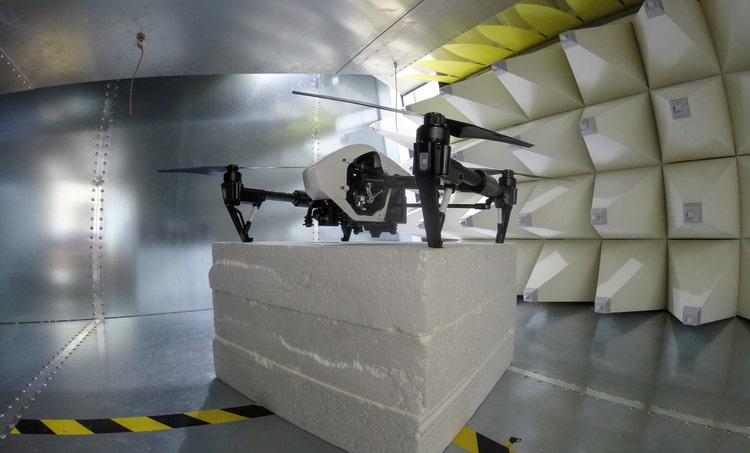 This dipole source is used as a radiator during EMI testing

Take a look inside just about any embedded system, microcontroller board, or similar digital board. You’ll find a host of ICs that run on single-ended bus protocols like I2C, UART, or SPI. These protocols are multi-wire protocols, meaning they require lines that run together along the PCB to route signals and transmit/receive data. Other important portions of the system are power blocks and any front-ends that interface with analog sensors or other components. These systems have an important quality in common: they may not create much crosstalk, but they are still susceptible to the same type of interference from external sources.

Common-mode EMI can be caused by a variety of sources, but the fundamental mechanisms that cause noise introduction into a circuit or interconnect are rather simple. Common-mode EMI appears as an unwanted current measured on two conductors with respect to a common reference ground. When the two currents are measured, the currents will be found to have the same power spectrum (magnitude) and phase. In other words, these noise currents appear to be identical (or nearly identical), even though the desired signals being sent along the interconnect may not be identical.

The image below shows an example of common-mode currents measured on two microstrips carrying different signals. In this schematic, we can see the cross-section of two microstrips and the noise voltages V1 and V2. The desired signals carry a voltage Vs1 (greater than 0 V) and Vs2 (exactly 0 V). The total voltage on each interconnect will be the sum of the signal voltage and noise voltage. Finally, we can define a common-mode voltage between the two interconnects, which is the sum of the two voltages.

In this case, because the noise on both interconnects is in-phase, the two noise signals add together. This noise can be picked up by a receiver or analog circuit, where it can then interfere with other components or mask the intended signal on each interconnect.

There are two principle ways common-mode EMI can be induced into the above arrangement of conductors:

Generally, we worry about how these mechanisms can induce common-mode currents, which will interfere with everything in a system except differential pairs. Common-mode currents are abnormal in electronic systems, so it’s important to see where these currents arise and how they can be eliminated.

How to Find and Fix Common-Mode Noise

The go-to solution for removing common-mode currents that originate as conducted EMI is to use a common-mode choke. There are commercially available common-mode chokes that are designed for a range of frequencies, ranging from simple coupled coils for DC power supplies to smaller chokes for ultra-high-speed parallel interconnects. 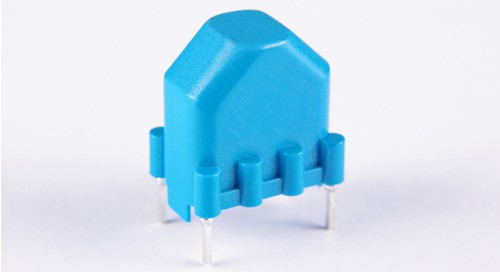 The primary direct cause of common-mode currents is a non-zero potential difference between different ground regions in a system, particularly in a system with multiple grounds. This can create a parallel path for noise currents propagating on a power bus, as shown in the example below. Note that this current path is mediated by parasitic, such as parasitic capacitance back to a chassis ground or another type of ground on the PCB, as shown below. 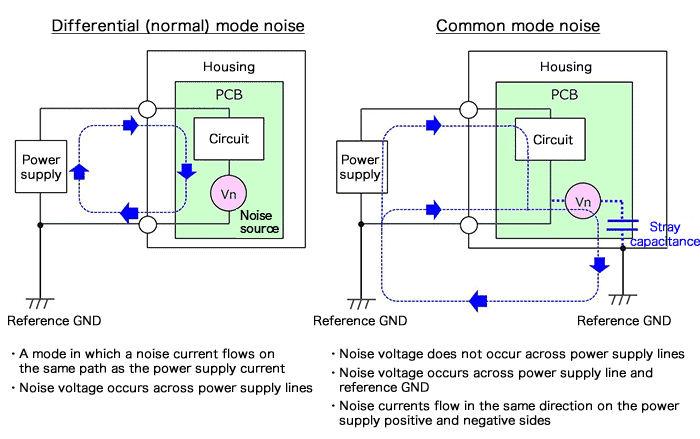 Comparison of differential-mode and common-mode noise between a power supply and a PCB [Source: ROHM]

Common-mode noise is normally discussed as a problem of unwanted conducted currents, which is not incorrect. However, common-mode noise is also its own EMI source, just like any other source of current. In the example shown in the previous image, the parallel currents each generate a  magnetic field, and the fields add away from the center region between the two wires. This radiated EMI can be a factor 100x larger than the field emitted from a differential-mode current following the same path. Such strong emission and its source in a system can be easily identified with a 3D field solver that integrates with your PCB layout application.

When you need to identify common-mode (CM) electromagnetic interference in a physical layout, use PCB design and analysis software with an integrated 3D EM field solver and a complete set of CAD tools. Cadence provides powerful software that helps automate many important tasks in systems analysis, including a suite of pre-layout and post-layout simulation features to evaluate your system.