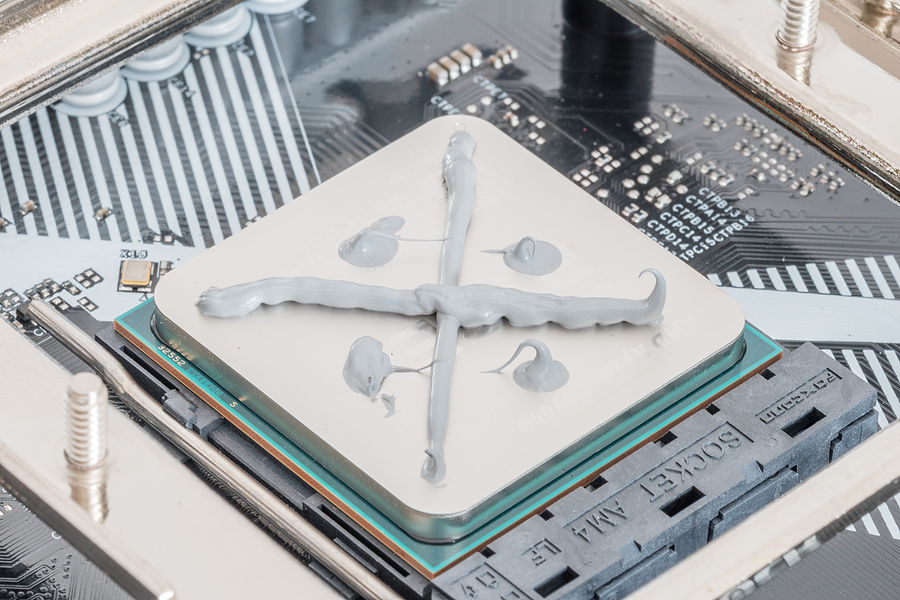 Whenever you apply a thermal compound material to an electronic component (such as a thermal paste or thermal grease), the intent is to speed up the rate at which heat is transferred away from a hot component. In this way, the intent is to lower the device’s temperature rise per unit of power dissipated in the device. This measure of temperature rise per unit of power dissipation is known as thermal resistance, and the goal in applying a thermal compound to a component is to lower that component’s thermal resistance.

Thermal compounds are called thermal fillers, or thermal gap fillers, based on the function they perform when applied to a component. When one of these materials is applied to a component, and the heatsink is attached to the component under mechanical pressure, the material fills in microscopic gaps at the component-to-heatsink interface. In other words, any air at the interface is replaced with a high thermal conductivity material that can efficiently transfer heat to a heatsink. By creating a high thermal conductivity path between the component and its heatsink, the heat flux between the component and the heatsink will be maximized.

Next, if we take the difference between these two values, we can see the degree to which the thermal compound (TIM layer) decreases the thermal resistance:

The challenge in using this formula is in determining the filler:air volumetric ratio, which can range anywhere from 10:1 to 1000:1 or even larger. This will also vary based on the type of filler material; some porous thermal pads will have low ratios, while a thermal grease can very efficiently fill microscopic gaps in the component-heatsink interface and can have much higher ratio.

From the above 1-D model, it should be clear that there are three factors determining which thermal compound might be best suited for thermal resistance reduction:

With this many variables at play in any given system, it can be difficult to make generalized comparative statements about the effectiveness of every thermal compound. Typically, the material selection consideration is not based on the change in thermal resistance, but rather on other engineering aspects like reworkability, cleaning, assembly costs, outgassing, etc. Once a compound is chosen, it will then be validated in a prototype assembly before production is scaled.

There is nothing wrong with this process until you find that the initially chosen thermal compound does not provide enough heat reduction. Instead, a comprehensive set of thermal simulations involving heat transfer and airflow should be performed to determine a target thermal resistance reduction value for important components. This way, you can specify a new criteria the system must meet and use this as a performance target, rather than focusing on cost or assembly. This may be a better strategy for high-reliability designs.

When you need to examine thermal characteristics of your system at every level, make sure you have the complete set of system analysis tools from Cadence. Only Cadence offers a comprehensive set of circuit, IC, and PCB design tools for any application and any level of complexity.