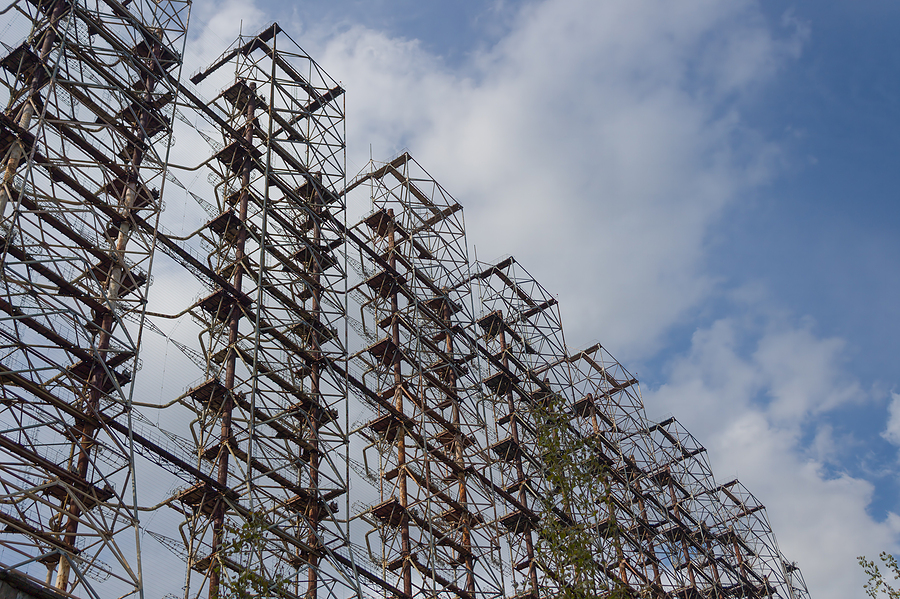 The old Soviet radar system at the Chernobyl nuclear plant is an ancient relic compared to the radar systems of today. Radar systems have become smaller and more efficient, while also providing higher resolution through more accurate beamforming and signal processing. Today’s newest radars are integrating advanced features to perform important tasks like imaging and object recognition in smaller packages and with lower power requirements.

As some designers start to move into this area of systems design, we hope this overview will help designers find their place on a team and better understand the newest development trends in radar systems. Like many advanced applications, the technological development process spans across disciplines and involves a diverse team of engineering professionals.

Early radar systems were very simple, essentially being a form of echolocation. These early systems were also very large and were only placed in large ground-based or ship-based installations, and later in aircraft. Later radar systems would evolve to include beamforming capabilities with phased arrays to direct their emission in specific directions. One driver of the development of smaller radar systems is in drones and automotive, where small radar modules were needed due to space constraints.

No matter which type of radar we look at from the past or today, all radars operate with a specific process and capability that enables object identification and tracking:

Through this process, the radar system can acquire range and heading information for multiple objects within its field of view. Large mechanically scanned arrays (such as you would see on ships) can have a 360° field of view. Smaller, more advanced radars for sensing and automotive use electronic steering with a phased array. 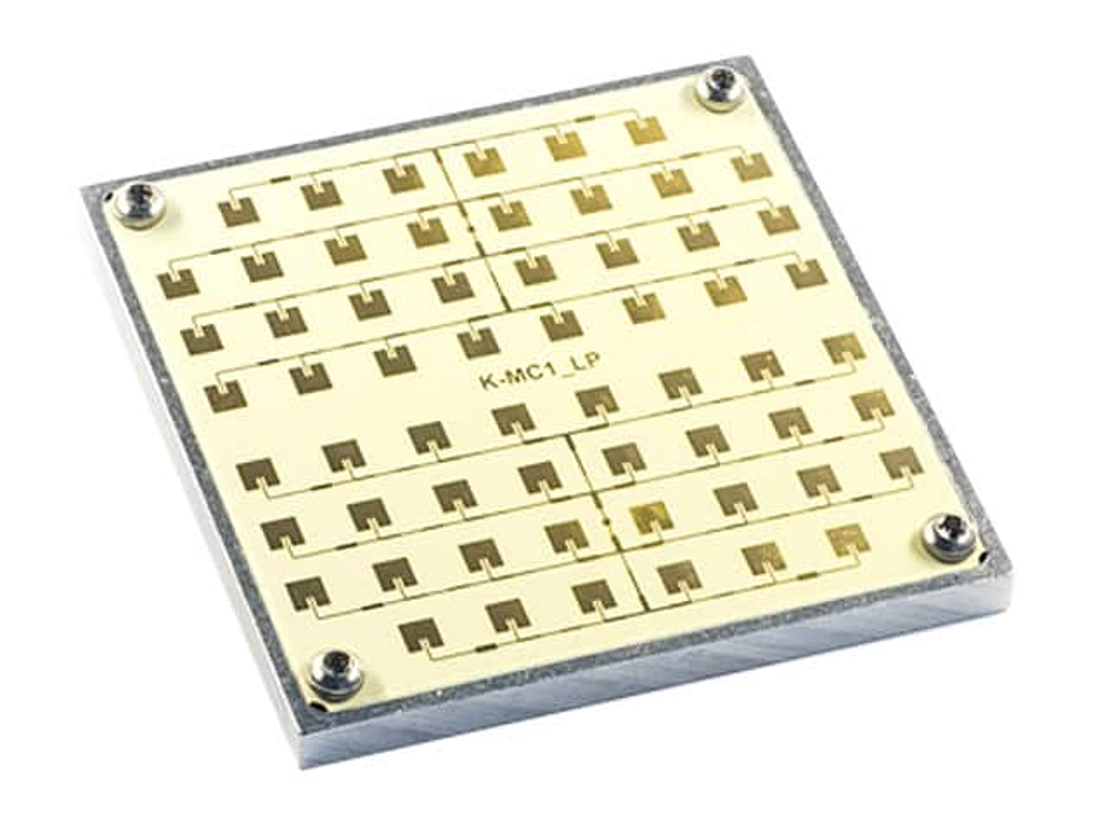 As the emitted signal interacts with an object in the nearby area, the object can induce a Doppler shift in the reflected wave if the object is moving. Once the signal is received by the radar’s RX channel, the Doppler shift and time-of-flight measurement are used to determine the range and heading of the object. Much of the signal processing performed in a radar system will attempt to determine range and heading, as well as direction of arrival and suppression of multipath reflections that create false objects. The standard algorithm used to distinguish real objects is the constant false alarm rate (CFAR) algorithm.

Large radars have always provided relatively high resolution and complete field of view. Smaller radars like those used in automobiles tended to have quite low resolution and variable field of view. However, to enable totally autonomous vehicles, imaging capabilities are needed with sensors. In other words, a range-velocity image can be formed in a very dense point cloud if the resolution of these systems can be increased.

The system resolution for radars in small assemblies or on a PCB can be increased in three ways: 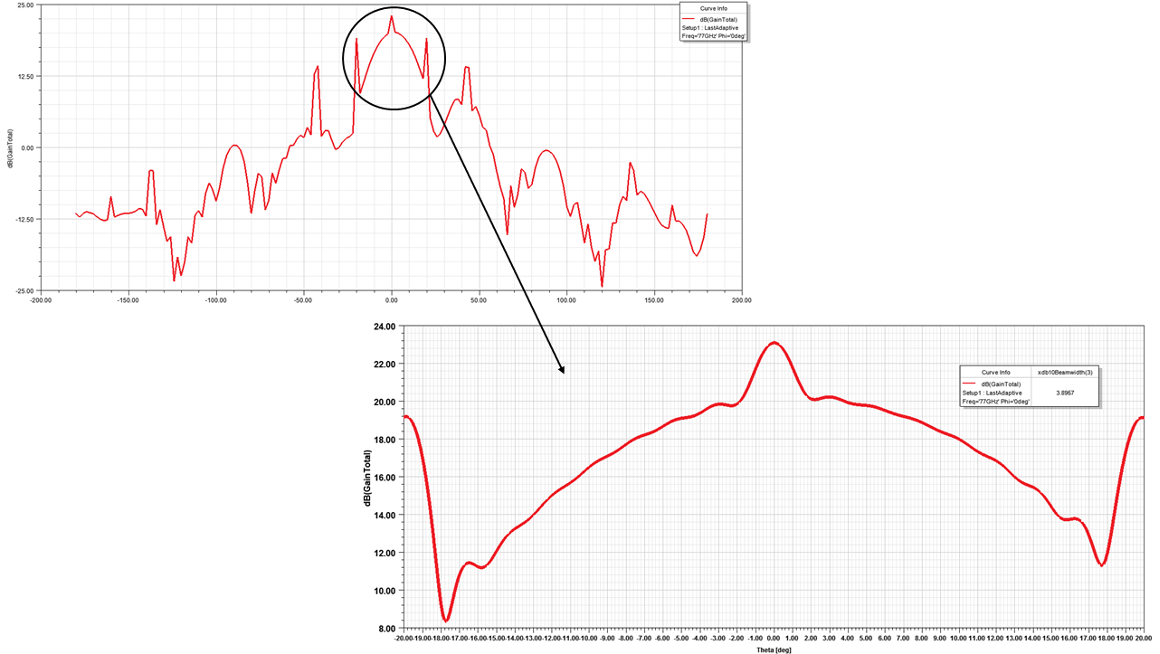 Example gain distribution from a large array of 20 transmit antennas in the azimuth operating at 77 GHz for automotive radar. Note that the -3 dB resolution limit is less than 1°.

Sub-degree resolution is sufficient for radar imaging at ultra-short range (less than ~30 meters), and the point cloud images generated from these systems could then be used in an AI model for object recognition and tracking in the surrounding scene. This type of radar system is known as cognitive radar due to the fusion between a traditional radar approach with high resolution and an AI model stack. An overview of these systems can be found below.

When a radar system becomes an imaging system, it now needs to supply a huge amount of data to a DSP controller at high speed. The standard protocol to use for this would be LVDS, although some evaluation products are using CSI-2 as the data transmission protocol. LVDS is a simple 2-wire interface and data streams from multiple transceivers could be transferred in parallel.

Once the data is received by a host controller and DSP is performed, the processed image data, and the command + control data needs to be transferred elsewhere using a very high speed protocol. For automotive, this will likely shift to 10G Ethernet or faster in the newest vehicles. Currently this is available over copper, but the excessively large amount of image data needs to be given to a vehicle host controller in real time, requiring a 28G or faster Ethernet connection, possibly over fiber.

Several roles for an embedded application are listed or implied above; these have been compiled in the list below for convenience: