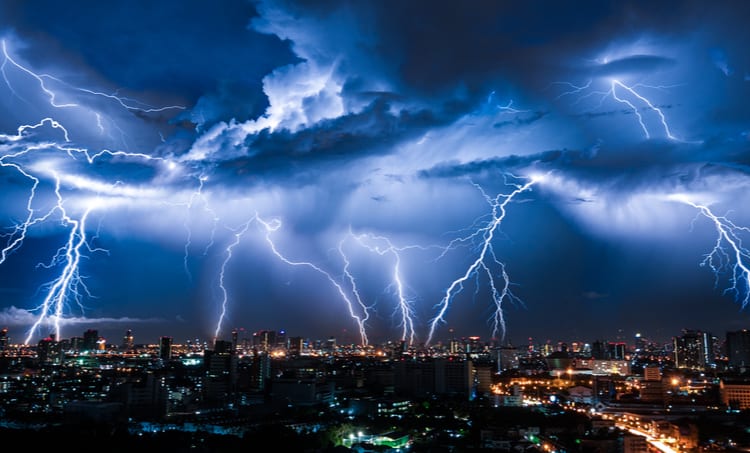 Lightning is an external source that generates transients in electrical circuits

Whenever the electrical power supplied to a circuit changes momentarily over a short duration of time, it is called transients. Transients invariably affect the voltage and current. AC and DC circuits are equally vulnerable to transients, and steady-state values are reached after the transient period. According to ANSI standards, transient duration is about 1/16 times the time period of the voltage or current waveform, or about one millisecond. The typical duration of voltage transients is 50 microseconds and current transients occur for about 2 microseconds. The transients generated in a circuit can be unipolar or bipolar.

Transients are the shortest power quality disturbance with a burst of energy in the circuit. The energy of transients can be additive or subtractive to nominal steady-state waveform energy. Generally, additive energy is experienced during transient conditions with a rise in voltage or a current several times greater than the nominal steady-state value. Under transient conditions, it becomes difficult for the components present in a circuit to withstand voltage spikes and the current surges as it is rated for the steady-state voltage and current values. Transients are also associated with abnormal changes in frequency, which can go up to 5MHz.

The Types of Transients in Electrical Circuits

Transients in electrical circuits can be classified as:

Both impulsive and oscillatory transients are further categorized based on frequency. The table below gives the classifications.

Classification of transients based on frequency

Sources of Transients in Electrical Circuits

There are several sources causing transients in electrical circuits. Sources can be either internal or external to the circuit. The table below outlines these sources.

Internal and external sources of transients

The Effects of Transients in Electrical Circuits

The generation of transients in electrical circuits cannot be stopped until there are energy storing elements, semiconductor switches, relays, circuit breakers, transformers, etc. present in the circuit. Cadence software can help you implement transient suppressing techniques in your circuit design.