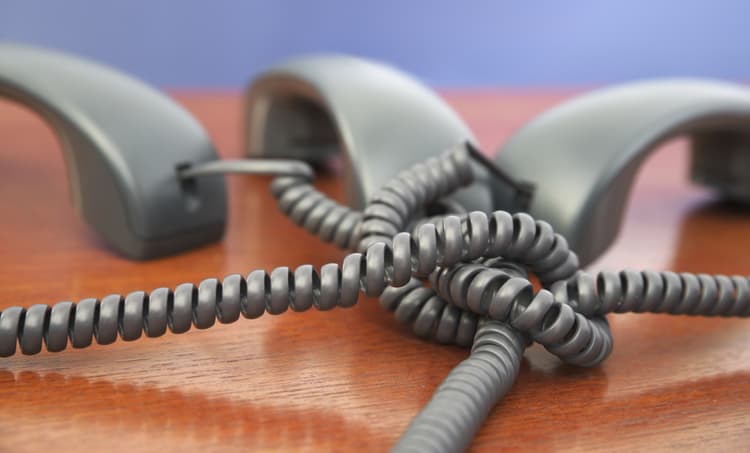 Remember those old phones that plugged into the wall? Before the phone system went digital, it was possible to hear faint echoes of someone else’s conversation during a phone call. This noise, where signals bleed between different wires in a cable, is better known as crosstalk, and the experienced electronics designer should be familiar with this phenomenon.

Near-end and far-end crosstalk both arise when a driven signal couples some of its power into a nearby interconnect on a PCB, in a cable, or in an IC. Crosstalk is undesired, as we want to ensure interconnects only carry power launched from the driver component. In general, you can never totally eliminate crosstalk; you can only reduce its strength to the point where it is un-measurable.

In understanding these types of crosstalk, we need to consider where the crosstalk is measured and what direction it travels once induced in an interconnect. 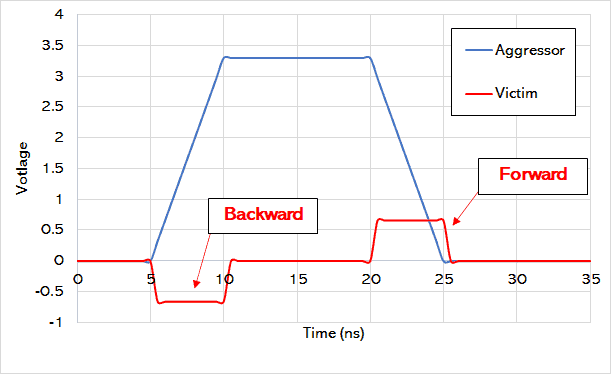 Example showing crosstalk induced on a victim interconnect, leading to backward and forward crosstalk on the rising and falling edges, respectively

All crosstalk is created inductively (through parasitic mutual inductance) or capacitively (through parasitic mutual capacitance). Inductive crosstalk is only induced when the aggressor signal changes levels, thus higher speed signals create stronger crosstalk. Capacitive crosstalk is created due to a changing potential difference between the two interconnects. In circuit models describing interconnects, the mutual inductance and capacitance are used to describe coupling between the aggressor and victim interconnects.

In this cross-section, we can see how parasitics between two traces produce mutual capacitance and mutual inductance, which are responsible for coupling noise between traces as crosstalk

Other Types of Crosstalk

The telecommunications world has taken to naming multiple types of crosstalk beyond near-end and far-end crosstalk. Note that these different types of crosstalk do not have special coupling mechanisms, coupling of noise between aggressor and victim interconnects always occurs inductively or capacitively. Just like in a PCB, IC, or cable assembly, crosstalk can appear as forward or backward crosstalk. Here are other terms often encountered in the telecommunications industry that are used to describe crosstalk:

Of these terms, only one describes a particular situation involving crosstalk: alien crosstalk. On a PCB, this is less common than crosstalk between traces and may not be noticeable for several reasons. First, cables may include some ground wiring, which creates some isolation between traces and other cables. Second, cables in PCBs tend to be located far from a trace that can induce crosstalk, so any crosstalk would be quite weak. Finally, the signal level in digital PCBs is often too low to produce a strong crosstalk signal, regardless of the position of the cable.

One possible exception can occur at very high frequencies, such as in wireless/RF systems that carry high power. In these systems, the frequency is high enough and the power in a cable assembly might be strong enough to produce strong crosstalk to a nearby trace. RF systems with unique cable or connector assemblies often need to be simulated with a 3D field solver utility to properly quantify crosstalk and identify when it will exceed allowed limits. When you need to evaluate near-end vs. far-end crosstalk in your PCB and implement solutions to reduce crosstalk, use PCB design and analysis software with an integrated 3D EM field solver. Cadence provides a powerful set of software tools that help automate many important tasks in systems analysis, including a suite of pre-layout and post-layout simulation features to evaluate your system.