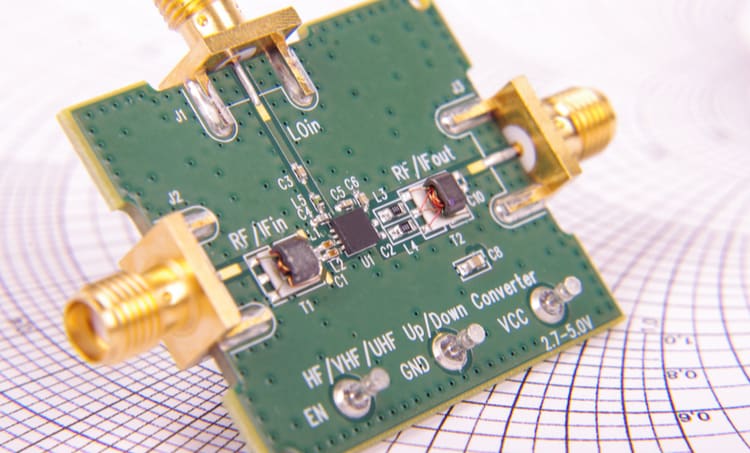 The characteristic impedance of most RF circuits is 50 Ω

Characteristic impedances in RF and microwave systems most often take the fixed value of 50 Ω. Power amplifiers and antennas in RF systems have both an input and output impedance equal to 50 Ω. To achieve higher output power in RF systems with various load impedances, the insertion of an extra network made of inductors and capacitors is required. The intention behind this insertion is for the extra network to possess impedance transforming properties and convert the 50Ω into a smaller value at specific frequencies. If the impedance transforming network is lossless, the power delivered to it reaches the load impedance directly, and higher power is achieved.

L-match circuits usually consist of an inductor and/or capacitor placed in the shape of the letter ‘L’. However, this placement can be changed according to the given input. There are several configurations of L-match circuits. The insertion of the L-match network between the source and load impedance converts the 50 Ω load resistance to a lower value. The L-match network then cancels the reactive part of the load impedance and reduces the value of the real part. This adjustment helps to deliver full power to the real part of the load impedance.

In summary, the L-match circuit cancels the imaginary part of the source and load impedance and converts the real part to a lower value so that maximum power is transferred to the load.

An L-match circuit inserted between the input and output converts the load resistance RL of 50 Ω to a lower value, Rin.

Let’s analyze how RL transforms into Rin with the L-match network. The equivalent circuit reduction principles are the basic equations governing the L-match circuit impedance transformation.

The steps involved in transforming RL into Rin are: