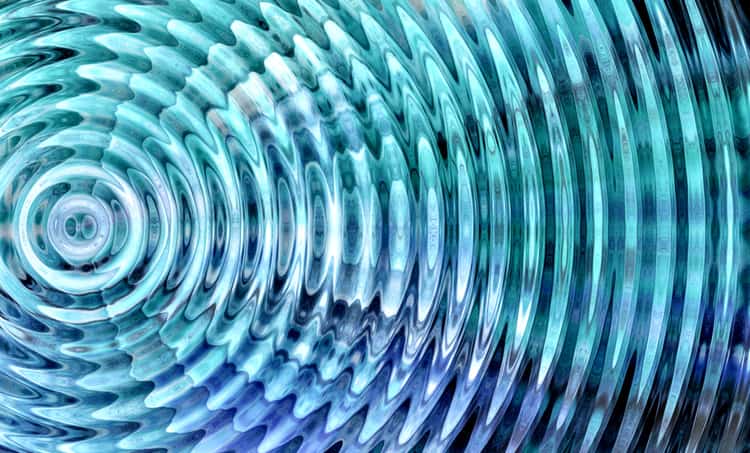 Resonance leads to standing waves, including in a via

For every signal being driven in an electronic system, there is a corresponding return path. The return path for any signal will try to follow the path of the driving current along an interconnect, but this does not always happen in real systems. Design choices like split planes, unclear changes in reference layers, and lack of decoupling will create non-ideal return paths and via resonance, board resonance, and EMI. In many cases, this can cause a design to fail EMC testing due to excessive radiated emissions from the board.

Non-ideal return paths and their effect on resonant excitation can be viewed from 2 perspectives: in terms of circuit models or in terms of wave excitation. At low frequencies, we can think about resonance in terms of circuit models, which are built using parasitics. At high frequencies, where wave propagation is dominant, resonances are described using a wave equation derived from Maxwell’s equations. Let’s look at these resonances and how they arise due to non-ideal return paths in a PCB.

What is a Non-Ideal Return Path?

Whenever an electronic signal propagates on an interconnect or in a circuit, there is a return current somewhere that balances the incoming current. For a transmission line hanging from a power pole, earth is used as the return path. For a PCB, we like to use ground pour or copper plane layers to provide a clear return path. These features in a PCB are meant to provide a clear path for current returning to the negative lead of the power source, forming a closed loop. 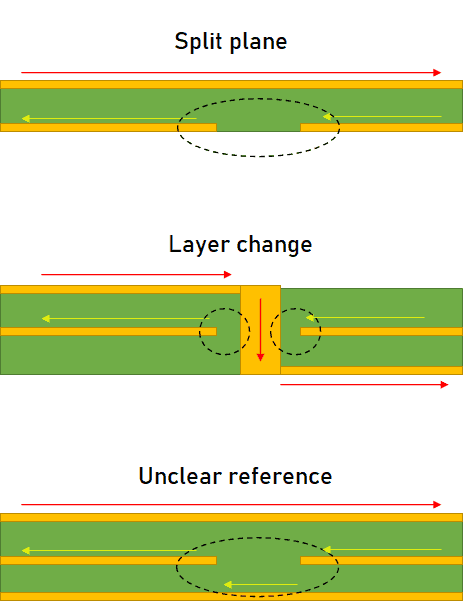 Non-ideal return paths on a PCB interconnect. The black circuits show the regions with a return path discontinuity and large loop inductance

How can these effects excite a resonance, including a via resonance? This is a fair question and it requires considering the inductance of the region with a non-ideal return path. In addition, once we look at high frequencies where wave propagation dominates, we can see how cavity resonances get excited in a PCB and how this type of excitation produces EMI.

Mutual inductance is proportional to the inductance of the individual elements

Loop inductance also defines the strength of an interconnect as an antenna. Any region in the board with high loop inductance will also emit more radiation than a region with lower loop inductance. This travelling radiation from a non-ideal return path region can excite cavity resonances in the board, leading to strong radiation at specific frequencies. For fast digital signals that are not carefully grounded, this will produce a spectrum of EMI peaks, and this is known to cause digital products to fail EMC tests.

A via is a cylindrical resonator that also has a set of discrete cavity resonances, and these can be excited in the same way. In this case, you would have strong crosstalk between the non-ideal return path region and the via occurring at the via’s eigenfrequencies.

How Can Designers Mitigate Issues Regarding Non-Ideal Return Paths and Via Resonance?

All of these problems with non-ideal return paths and via resonance occur due to improper grounding in a PCB, especially at high speeds and high frequencies. There are some simple solutions that can solve these problems:

No matter how non-ideal return paths and via resonances form in your system, you can analyze all aspects of crosstalk and EMI using PCB design and analysis software with an integrated 3D EM field solver and a complete set of CAD tools. Cadence provides powerful software that helps automate many important tasks in systems analysis, including a suite of pre-layout and post-layout simulation features to evaluate your system.